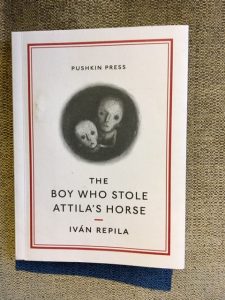 Two young boys, brothers known only as Big and Small, are trapped (or were they thrown?) in a pyramid-shaped well in the heart of a forest. They cling desperately to life, become feral, crazed. This short novella – just over 100 pages on small-format, high quality paper (with French flaps to the cover, which I find inordinately pleasing) – is a surreal…what? Allegory (but for what? The instinct to survive? Political injustice? In ch. 11 we hear ‘the land seems to be governed by a mechanism of suffering that works against every one of nature’s decreees’.) Kafkaesque fable? (about human inhumanity? – in Ch. 23 Big gives Small a lecture on how to kill. Maybe the boys’ mother put them, like the pussy in the rhyme, in the well). Dark fairytale with more monsters than fairies – a Freudian lesson in the unheimlich? A descent into the circles of the human mind and its capacity for insanity and hallucination, a counterpart to Dante’s circles of hell? A variation on Aesop’s fable of the fox in the well and the unsympathetic wolf looking down on him?

I turned to some reviews to seek clarity or confirmation.

Veronica Scott Esposito recommended it at Conversational Readings: cf Kobo Abe’s The Woman in the Dunes – I posted on it here – another fantasy/allegory about a person trapped down a hole or pit, exploited, frightened, reverting to an animalistic state.

John Self, Asylum – ‘unpleasant’; allegory of some sort, many possible interpretations, from environmental fable to perils and exigencies of growing up; most probably socio-political (see the epigraphs by Thatcher on free market forces and the rich/poor divide, and Brecht on uprising and revolt) – inequality in social hierarchy. Packs a punch way above its weight.

I also found it unpleasant, though I admired the visceral punch it packs, and the language (brilliantly rendered by Sophie Hughes) is often breathtakingly good. Its depiction of human corporeality, of human corruption (as in bodily putrefaction as well as morally), of the narrow divide between civilised behaviour and bestiality, is very hard to take in anything but short doses.

The boys love and support each other, most of the time. They also harbour unspoken thoughts about cannibalism. Big rations their meagre food in such a way that he gets a much higher proportion, which he justifies by insisting that he’s the one whose superior physique will ultimately lead to their escape. Survival of the fittest. Though he also shows capacity for self-sacrifice.

John Self points out a feature I hadn’t registered: the chapters aren’t numbered sequentially, but as increasing prime numbers (none of them even, of course). He suggests, plausibly, that they correspond to the number of days the brothers spend in the well (the final chapter is 97). Not surprisingly their bodies have wasted almost to nothing in that time.

Descriptions of this process are unstinting, often grimly humorous in their verbal ingenuity, like this one of Small in ch. 59. First, he has named himself Inventor and devised ‘cultural activities’ for his brother, ‘although really he does it because he cannot stop imagining.’ He’s also ‘perfected’ a bizarre ‘osteo-vegetal music’ created by ‘hitting certain bones with dry roots’. He’s frustrated with the childish percussive potential of ‘knees, hips, torso and collarbone’, and would really love to somehow ‘rotate his head and arms and rock out on his spine…’

His extreme boniness makes him look like a misshapen neighbourhood made up entirely of street corners, and this affords him an inordinate range of obscure, high-pitched sounds which come together as a tune when he strums his tendons and thumps his stomach and chest.

The title? In Ch. 31 Small announces his fantasy that he’d stolen Attila’s horse to make shoes out of its hooves; ‘they smelled like the shell of a dragon’s egg or like the skull of an idol’, he explains with unsettlingly calm clarity. When he wore them he killed whatever grew underfoot – he graduated from grass to a camp of sleeping people, where he played a grim game of ‘bouncy hopscotch’. The sleepers woke up screaming and died in agony:

Their bodies turned brown and red. It looked like a poor man’s rainbow: lustreless, born out of a candle and a puddle of urine. I felt important, like a painter.

John Self suggests that last image, narrated with such deadpan lack of affect, can be interpreted as a fable of the artist’s cruelty. Maybe. Or perhaps it’s part of this disturbing, twisted tale’s dark, surreal logic: creativity arising from suffering, like honey-sweetness from  a corpse, the lion and bees image and slogan on Lyle’s syrup tins (at one point the boys wait for a dead bird’s body to decompose so they can feast on the maggots in its corpse).

I don’t know, writing this has made me feel better disposed towards this powerful, highly original, weird little novella.