I remember feeling disturbed and puzzled by Werner Herzog’s 1974 film ‘The Enigma of Kaspar Hauser’ when it was released in England. It told the strange story of the ‘wolf boy’ or feral youth who wandered into the city of Nuremberg in 1828 bearing a letter requesting he be taken to the home of a local cavalry officer. He could speak just a little broken German, and seemed barely able to walk. With typical weirdness, Herzog cast an unknown street musician in his forties to play the teenage lead. 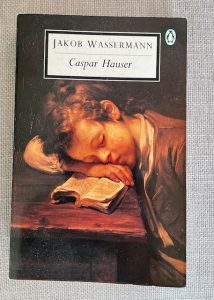 This novel by Jakob Wassermann includes most of the information known about Caspar Hauser’s life. When he was taken in and taught to read and write by a local schoolteacher, he was able to articulate his story. He claimed to have been incarcerated in a tiny cell for as long as he could remember. He was brought bread and water by a mysterious man who never revealed his face. He never saw the outside world, and had only a toy horse as company.

He became a minor celebrity. Rumours arose that he was a descendant of the dukes of Baden, and that he’d been imprisoned for reasons that gave rise to all kinds of speculation. Wassermann also shows that Caspar was suspected of being a fraud, and had made up this bizarre story – though it’s not clear why he would have done that.

Wassermann is less interested in providing a clear account of Caspar’s origins, or of the veracity of his story, than he is in the portrayal of a pure spirit, untainted by contact with corrupt humanity. In this account he’s a natural, an innocent, of the kind that intrigued the Romantic poets. He could also be seen as a sort of counterpart to the Frankenstein creature, but one created by Nature, not science.

For much of my teaching career I taught linguistics as well as literature. There’s a range of fascinating theories about child language acquisition. One of the most widely propounded (but not universally accepted) is Lenneberg’s theory (1967) of the ‘critical period’. This is the view that children are able to assimilate the language and behaviour they witness as they grow up, but this capacity diminishes once they pass a certain age, usually held to be around puberty. If deprived of such interaction, their cognitive ability doesn’t develop. This seems to be Caspar’s condition.

The sad case of the American girl known as Genie is often cited in this connection. At the age of thirteen she came to the attention of the welfare system of California. It emerged that she had been kept strapped for much of her life into a chair by her deranged father, who never spoke to her or allowed her to interact with others. When the authorities took over her upbringing, she acquired some basic social skills, but never became a fluent first language speaker – hence her importance for those who favour the critical period theory: she’d passed the age when language acquisition comes naturally.

I’ve seen two of my grandsons, now aged five and seven, become fluent in English, their father’s language, and Spanish, their mother’s. They attend a school just outside Barcelona where the teaching medium is Catalan; they’re now fluent speakers of that language, too. Yet adults usually struggle to become even partially proficient when learning a second language.

Caspar was 17 when he started to be socialised and taught language skills, so unless the critical period age limit is stretched implausibly, his case doesn’t really fit with the theory. On the contrary, his rapid acquisition of fluency in speaking and literacy would appear to support the views of the local sceptics who thought he was putting on an act.

Wassermann raises some of these issues, but ultimately prefers to focus on the young man’s astonishing sensitivity to stimuli, seemingly unfeigned intense emotional reactions to social and other situations, and apparent longing to find his mother. An English earl turns up and takes an unusual interest in him, and encourages Caspar to believe he will adopt him, take him back to England, and introduce him to his longed-for mother. Other events intervene, and dark forces exert strange influences on him – or is he a liar?

Quite a lot happens in Wassermann’s account of Caspar’s short life after his enigmatic appearance. Unfortunately, these dramatic incidents are widely spaced, with a great deal of rather ponderous intervening commentary and reflection on Caspar’s nature. The German author manages to render a fascinating story a bit stilted and wordy: I found the long narrative dragged, and had to skip sections.

This isn’t the fault of the translation by Michael Hulse. Wassermann writes in the mannered, verbose style of the previous century. 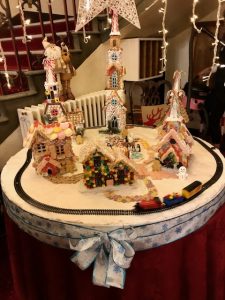 Our oldest grandson’s birthday falls just before Christmas, so Mrs TD and I travelled to Somerset to celebrate with his family. We broke our journey in Taunton and stayed overnight in the atmospheric Castle Hotel, with its cobbled forecourt, crenellations and Norman garden.

The lobby looked very festive, with the centrepiece of this huge gingerbread cake, with a miniature electric train chugging around its circular track. How our grandson would have loved it when he was little, and train mad.

Before sharing a delicious seafood meal with our old friend the regulator, who lives nearby, we trawled the shops (in my case, charity bookshops). I came up with this haul of five titles. 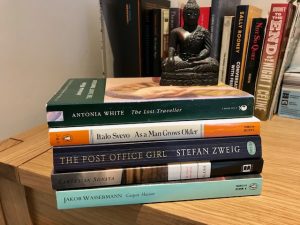 Antonia White’s The Lost Traveller is the first volume in the trilogy sequel to Virago’s first-ever title in its iconic Modern Classics green-spined series: Frost in May. I have yet to read it, but it’s good to have both volumes to anticipate.

I posted on Stefan Zweig’s poignant novel Beware of Pity last year, and The Post Office Girl was recommended by a Zweig aficionado soon afterwards.

I have a couple of other William Gass titles waiting to be read, and liked the look of this American paperback edition of Cartesian Sonata and other novellas – his fifth work of fiction.

I saw the Werner Herzog film ‘The Enigma of Kaspar Hauser’ a few years after it came out in 1974, so it was good to get hold of the 1908 novel by Jakob Wassermann based on the same strange story, in a handsome PMC edition.

Italo Svevo, the pen name of Aron Ettore Schmitz, was a friend of James Joyce during his Trieste years. I read The Confessions of Zeno pre-blog, so I was pleased to find another of his novels in the older PMC format.

Back home in Cornwall for Christmas, and a pleasant family time with the other grandchildren and their parents, over from Catalonia. Among my presents was this handsome brass clutch pencil: SketchUp 5.6. It’s made by the German company Kaweco. It was a thoughtful gift from Mrs TD’s sister and brother-in-law. 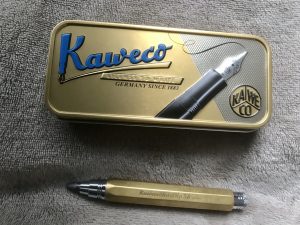 Its design I think goes back to the 1930s. It looks very art deco and Weimar. It came in an equally retro tin box. I’ll enjoy using it. Problem is, I now want its companion fountain pen.

I hope you enjoyed your Christmas, if you celebrated it, and that 2020 is full of good times. I can’t say I look forward with much relish to living in Britain once we’ve left the EU. Let’s hope we can somehow maintain good relations with our friends and neighbours across the Channel – despite turning our backs on them in a fit of ill-tempered petulance.