We were in the bar of the business-colonial hotel in the bombed-out city. It was nearly Christmas.  A noisy group of men in suits was eating food from a long buffet table at one end, drinking beer and bragging competitively.

The barmaid had a nasty bruise on her neck.  When I ordered our drinks I asked her what had caused it.  ‘Kids’, she said (‘Keeds’).  She said she was from Georgia.

X and I sat at a table at the less raucous end of the room. The chairs were faux-leather, intended to look impressive.  A flat-screen tv on the wall near our rosewood-veneer table was tuned to Sky news but with the sound muted.  Disasters scrolled in an endless loop across the foot of the screen.  We drank our pints.

‘I was thinking of doing a story about a lovelorn green parrot, like ‘The French Connection’ without the drugs’, I said. ‘Or the cops. Or New York.’

‘So the green parrot writes letters’…

‘Kind of.  Jean Lemaire was this poet-rhetorician at the court of Margaret of Austria, the Duchess of Savoy.  Early sixteenth century. He wrote the poems when she left on a visit to her homeland in Germany.  It was his symbolic way of conveying his grief at being separated from her, and to demonstrate his grateful dependence on her patronage’.

‘So he wrote this as if he were a parrot? Did she buy it?’

‘Nobody knows, but the parrot certainly did.  He got eaten by a dog.  Before that he announced he’ll commit suicide because of fin amour, his unrequited passion for his first duchess’.

‘This parrot fancies the duchess Margaret?’

‘How does he manage to compose epistles when he’s dead?’

‘Exactly.  Even more important, he’s not of noble birth, so his love is doubly doomed; even the devouring dog is of more exalted parentage.  And when the duchess is widowed, the parrot expresses a desire to be transformed into the mourning plumage of a crow or raven’.

‘Sycophant. Are you suggesting this is an allegory?’

‘Yes.  The court poet lives in a constant state of uncertainty: will he fall out of favour?  By portraying himself as a hopelessly inept lover he intends to ingratiate himself with his fickle patron with a combination of wit and pathos.’

‘This parrot is a polymath.  He can talk in four languages.  He can communicate with humans: a rara avis.  Runs rings round the Maltese Falcon.  He does a Hugh Selwyn Mauberley and writes an election de son sepulchre’.

‘Pound took that line from an ode by Ronsard’.

‘I’m not sure anyone will want to read about a late medieval lovesick multilingual Belgian parrot’, said X, turning to lip-read the football news on Sky. 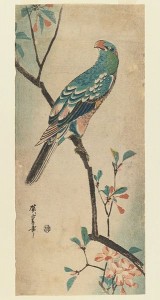