The second volume of Virginia Woolf’s collection of her own essays, The Common Reader, was published by the Hogarth Press in 1932, some seven years after vol. 1 – about which I wrote here, here and here

Again the range is wide; there are essays on Donne, novels of Hardy, Gissing and Meredith, prose writings from the ‘strange Elizabethans’ to Swift, Lord Chesterfield, De Quincey, Hazlitt and more. These include such forms as letters, diaries, autobiography and biography. There are less prestigious literary subjects too, from obscure 18C diarist parsons to rumbustious sporting gents. And Beau Brummell – his sad decline from lionised society dandy to shabby, smelly, neglected, lonely old exile in Calais. 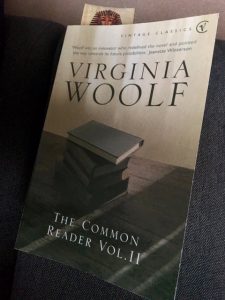 My Vintage Classics paperback edition of 2003

Woolf’s reading was eclectic and formidable; the notes appended show that for each essay she’d consult a daunting set of sources. For the piece on Donne, for example, her reading included, apart from the two-volume edition of poems of 1896 by Chambers and another in two volumes by Grierson (1912), Sir Edmund Gosse’s two-volume Life and Letters; Lady Anne Clifford…Her life, Letters and Work by GC Williamson, and The Diary of Lady Anne Clifford.

In another post I hope to consider the essays on some of the women writers Woolf discusses. For now I’ll just note a few high points.

In ‘The Strange Elizabethans’ she notes:

Elizabethan prose, for all its beauty and bounty, was a very imperfect medium. It was almost incapable of fulfilling one of the offices of prose which is to make people talk, simply and naturally, about ordinary things.

But when it descends to down-to-earth matters, it’s filled with ‘awkwardness’ – as when Lady Sidney (d. 1586) finds herself cold at night when staying at court, and writes a letter soliciting the Lord Chamberlain for a better room that could have been put ‘more simply and with greater force’ by a housemaid of the same age.

She traces three main phases in the writing career of John Donne. The ‘imperious lover’ is followed by the ‘servile and obsequious’ figure writing eulogies for wealthy patrons, and all the ‘psychological intensity and complexity’ that characterised the satires and love poems changes. From feeling an affinity with the ‘contrasts’ in those earlier works, ‘he leaves us in the lurch’, and becomes ‘more remote, inaccessible, and obsolete than any of the Elizabethans.’

Here is the quality that shines through most of these essays. Woolf has the capacity to get to the essence of a writer’s or a period’s defining qualities and express her insights in often colloquial, unadorned language, to achieve what that first quotation demonstrates the Elizabethans found impossible. There’s a strong sense of a powerful reading intelligence conversing undogmatically with her reader (she’s particularly good on Hardy) – a critical approach that she delineates at length in the final essay in the collection, ‘How Should One Read a Book?’

The only advice, indeed, that one person can give another about reading is to take no advice, to follow your own instincts, to use your own reason, to come to your own conclusions.

It’s an approach I tend towards in this blog. I can then, as she does, ‘put forward a few ideas and suggestions because you will not allow them to fetter that independence’ which is the essential quality of a reader. Outside of of the ‘heavily furred and gowned’ authorities in the academy, there are no clear laws or rules for readers.

Readers experience ‘a thousand conflicting impressions’ when reading, which we try to order. Then we turn to Defoe, Austen or Hardy ‘better able to appreciate their mastery.’ All this miscellaneous, eclectic, voracious reading served Woolf – and, by extension, all readers – ‘not to throw light on literature, not to become familiar with famous people [biographies, autobiographies, etc.], but to refresh and exercise our own creative powers.’

It’s sometimes asserted that literary critical writing – even in the form of a humble blog, provided it’s done thoughtfully – is a kind of creative writing. In my experience in writing this blog there’s a truth in that final remark of Woolf’s. When we talk about literature we ‘remain readers’. But even readers, as distinguished from ‘critics’, have ‘responsibilities’:

The standards we raise and the judgements we pass steal into the air and become part of the atmosphere [blogosphere?] which writers breathe as they work.

What we readers aver about our reading must be ‘well instructed, vigorous and individual and sincere’ if it is to have any value. We must judge ‘with great sympathy and yet with great severity’: this she hopes will enrich the world in some way.

These are exacting standards to read and write by. Being a Woolfian ‘common reader’ requires uncommon commitment, but ultimately one has to be able to say, in Woolf’s resounding words that close this entertaining collection:

They have loved reading. 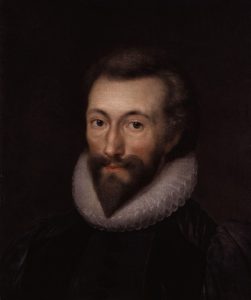