Alan Hollinghurst, The Sparsholt Affair Picador pb. (2018; first published 2017) I read The Line of Beauty years ago and enjoyed it, but this one I struggled with. David Sparsholt is first seen as a 17-year-old ‘new man’ at an Oxford college in 1939, lusted after by a group of Evelyn Waugh types. Years later he’s involved in a homosexual scandal which haunts his son, whose life is the subject of the rest of the novel. Louche socialites and some explicit sex should add up to a more engaging narrative, but it didn’t gel for me. I found them to be a self-indulgent bunch of shallow narcissists.

Kamila Shamsie, Home Fire Bloomsbury pb. (2018, first published 2017) This was far better. A timely plot involves Muslim ‘fighters’, jihadi brides, and the families they’ve left behind in Britain; there’s also a Muslim home secretary whose role is compromised in this plot. In a nail-biting finale the family ties of the characters we’ve been introduced to with such compelling narrative skill are tested to the limit. It’s a retelling of the Antigone story.

Eley Williams, The Liar’s Dictionary Windmill pb. (2020) I’d read and heard good things about this, but was disappointed. Alternating narratives thread together two linked narratives: in the present day, Mallory is engaged in work on digitising the (unfinished) Swansby New Encyclopaedic Dictionary – a pale rival of the OED, and culling the ‘mountweazels’ or ghost/invented words included as a sort of linguistic-existential act of guerrilla lexicography by one of its original (deadly bored) clerical contributors. This is the subject of the second narrative thread: in 1899 Peter Winceworth is one of a huge staff working on the original version of the dictionary in the same building in which Mallory now toils half-heartedly as a low-paid intern. There’s a complicated, rather silly plot that’s entertainingly put together, and it’s all quite good fun – but insubstantial. The narrative voice is the best thing: Williams playfully savours the intricacies and textures of the English language.

William Trevor, The Children of Dynmouth Penguin pb. (2014; first published 1976) This also came highly recommended – JacquiWine’s blog in particular praised it. I’m afraid this one disappointed me as well. As always with William Trevor, it’s superbly well crafted, but I found the plot rather tacky and nasty. There’s a creepy central character, an obviously disturbed teenage boy who blackmails inhabitants of his small seaside town into helping him fulfil a bizarre plan to stage a macabre act he thinks of as comedy for the forthcoming church fête’s talent competition. That his routine is about a serial murderer of women indicates the depths of this lad’s depravity. As a portrayal of the murky depths beneath the bland surface of an apparently sleepy town it’s quite effective, but, oh dear, it’s not uplifting. I need a bit of a lift these days. 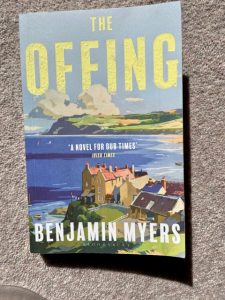 Benjamin Myers, The Offing Bloomsbury pb. (2020, first published 2019) A coming of age novel that also failed to intrigue me. There’s some fine (sometimes over-written) nature writing, but the plot is clunky and the characterisation unconvincing. Another teenage lad undergoes a sort of extended epiphany when he meets a bohemian, artistic woman called Dulcie, who lives a kind of hermit’s life with her fine German shepherd dog in a cottage overlooking a bay on the coast of N. Yorkshire. It’s 1946, and the country is trying to heal itself after the war – and the boy is trying to find a direction in life that’s preferable to toiling down ‘the pit’ like his coal-mining forebears. Unfortunately I didn’t really care if things worked out for him, and Dulcie’s story, gradually revealed, invites us to believe she was in a circle that included every major artist and writer of the pre-war decades. The name-dropping becomes slightly ludicrous, and the dialogue Myers attributes to her is implausibly literary and polished.