This is a typically entertaining Kate Atkinson novel: not too demanding, well put together, and pretty forgettable. 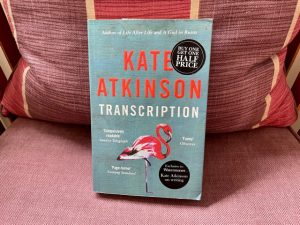 The structure is a little confusing at first, with contrapuntal sections set in completely different decades of the life of the protagonist, Juliet. In the first, set in 1981, she’s an old woman who’s injured in an accident – after years living in Italy and back in London on a visit, she’d looked the wrong way when crossing the road.

Next it’s the fifties, and she’s working in a dull job with uninspiring colleagues at the BBC. Then we go back a decade to the most substantial – and interesting – section: the years she spent as a clerk with the secret service. Her job is what gives the novel its title: she’s given the mundane job (considered all a young woman is good for in those unenlightened days) of transcribing on her typewriter the dialogue that’s been covertly recorded of a group of Nazi sympathisers. The flat next door has been set up by a British agent, who poses as another Nazi, as a supposed safe place in which to hold their meetings and plot against the British war effort.

Juliet is much brighter than her job allows her to be, and is soon recruited by her enigmatic bosses to do some real spying. What follows is a le Carré type espionage thriller, with a bit of unrequited love that’s more like a Barbara Pym plot element.

As I said at the start, it’s all good fun, and ideal for these fraught times when I find it difficult to focus on anything that requires close attention. 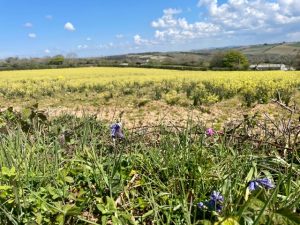 Now for other matters. I went for one of our regular local walks in the country with Mrs TD yesterday. It was yet another glorious sunny day, and nature is thriving. Early-developing trees like sycamore have already grown large leaves, but like their slightly tardier fellows they’re still a lovely shade of pale green, almost transparent when the sun shines through them.

A chestnut nearby has been if full bloom for a couple of weeks now, a wonderful shade of magenta. Blossom on most other flowering trees is just about over, but there’s still enough to keep the bees happy – and me. 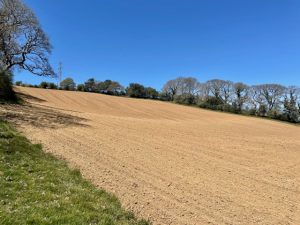 I posted pictures of this field last summer when it was full of ripe barley. Swallows and martins hunted for insects overhead then – but not yet this spring

Big news: as we passed a farm where late last summer I saw a group of swallows lining up on a telegraph wire, clearly preparing to migrate, I paused to scan the sky. I still hadn’t seen any first hirundine (what a great word) arrivers this spring – and sure enough, there they were! Two swallows, swooping across the valley, tracing aerial arcs at high speed. This is a sight that always lifts my spirits. I’ve been looking out for them for weeks, but this fine weather is blowing down from the north, and is therefore cold – maybe this has deterred them until now. 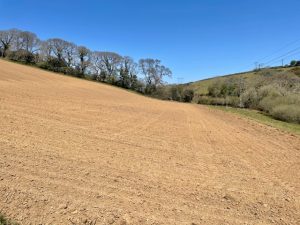 The view across to the next field, also freshly ploughed. Not a swallow in sight – but what a view

Work has been all-consuming so far this term, so although I’ve found time to do some reading – most recently and notably Alfred Hayes’ taut, harsh little novel of 1958, My Face for the World to See, published in their usual handsome covers by those splendid folk at NYRB (I can’t write about it here because I impulsively lent it to someone, and would want to quote from Hayes’ style: he can write). I’ve just started Kate Atkinson’s sequel to Life After Life (2013), A God in Ruins, but doubt I’ll write about it here as I didn’t much care for the first one, interesting as it was in parts; I found it what I think film buffs call too ‘high concept’ in structure and content. Why read it? It was lent to me, so would be churlish not to. The sequel is more of the same thing, if the first 70 pages that I’ve read are anything to go by. Entertaining enough, though.

I just listened to the BBC Radio 4 programme ‘A Good Read’ – which I included in Pt 3 of my list of recommended podcast-programmes back in the summer and enjoyed the discussion by Julia Blackburn, whose choice this book was (good taste), and David Morrissey, of JD Salinger’s short story collection For Esmé — With Love and Squalor. (Link to the programme HERE.) I posted about this book in the early days of my blog, so thought it wouldn’t be amiss if I recycled part of it here now, in the hope that, if you missed it first time round, you might feel inspired to give this early Salinger a try. It’s sublime. Here’s an extract:

Most of the stories in this collection concern war and its effects on individuals, and the traumatised memories of post-war Americans.  Even when its presence isn’t directly felt, the war has created in the characters in the stories a damaged, questing quality; as we saw in Franny and Zooey, most of them seek solace in oriental mysticism.

Some (usually children) find enlightenment; others are thwarted.  The opening epigraph to the book is the famous Zen koan – what is the sound of one hand clapping?  This serves as the theme of the collection: how to transcend or deal with mundane reality when in contact with the dulling, deadening effect of what Holden Caulfield in The Catcher in the Rye and members of the Glass family in other stories call ‘phoniness’.

The opening story, ‘A Perfect Day for Bananafish’ sets the tone with the story of Seymour Glass’s suicide in 1948 while on holiday at a Florida beach hotel with his shallow bourgeoise wife Muriel.  In the opening section there’s Salinger’s usual technique on show: Muriel chats distractedly on the phone with her mother – there’s minimal authorial intrusion or commentary.  This is typical of Salinger’s fiction: characters talking.  In this way he shows us their foibles, weaknesses and strengths without having to tell us what’s going on.

In the story’s second section we see Seymour, about whose mental health Muriel’s mother had been expressing (not very sympathetically) concern to her daughter, chatting on the beach with a small girl called Sybil.  Unlike the women’s selfish talk, Seymour shows himself as sensitive and charmed by Sybil’s innocent prattle.  He teases her gently about the fictitious titular fish, telling her they eat so much they get too bloated to escape from the holes they enter on the seabed, causing their own deaths.  The shocking denouement echoes this jolly, innocent narrative, told to amuse and entertain the girl, in a chilling, existentially tortured way.

The whole post can be read by clicking HERE, and there are links there to the other Salinger titles I’ve posted about. Do read him if you haven’t already.