I’m still finding little time for my own reading as I work on the Romantics. So I thought I’d share here a piece I’ve adapted from something I’ve been preparing for my students to work on:

A central theme in Wordsworth’s epic blank verse ‘autobiography’ or history of the development of the poet’s mind, The Prelude, is that our identity and character are shaped by what he called “spots of time”. These significantly punctuate our lives, providing a “renovating virtue” by which “our minds / Are nourished and invisibly repaired.” They usually occur in the poem as an epiphany experienced arising from an incident or sight in the natural world.

One evening (surely I was led by her) [ie Nature]

I went alone into a Shepherd’s Boat,

A Skiff that to a Willow tree was tied

‘Twas by the shores of Patterdale, a Vale

Wherein I was a Stranger, thither come

A School-boy Traveller, at the Holidays.

Forth rambled from the Village Inn alone

The moon was up, the Lake was shining clear

Among the hoary mountains; from the Shore

In cadence, and my little Boat mov’d on

Even like a Man who walks with stately step

Though bent on speed. It was an act of stealth

And troubled pleasure; not without the voice

Leaving behind her still on either side

Until they melted all into one track

And now, as suited one who proudly row’d

With his best skill, I fix’d a steady view

Upon the top of that same craggy ridge,

The bound of the horizon, for behind

She was an elfin Pinnace; lustily

I dipp’d my oars into the silent Lake,

And, as I rose upon the stroke, my Boat

The bound of the horizon, a huge Cliff,

As if with voluntary power instinct,

Uprear’d its head. I struck, and struck again

And, growing still in stature, the huge Cliff

Strode after me. With trembling hands I turn’d,

And through the silent water stole my way

Back to the Cavern of the Willow tree.

And, through the meadows homeward went, with grave

And serious thoughts; and after I had seen

That spectacle, for many days, my brain

There was a darkness, call it solitude,

Or blank desertion, no familiar shapes

Of hourly objects, images of trees,

Of sea or sky, no colours of green fields;

By day and were the trouble of my dreams.

Wisdom and Spirit of the universe!

Thou Soul that art the eternity of thought!

And everlasting motion! not in vain,

By day or star-light thus from my first dawn

Of Childhood didst Thou intertwine for me

The passions that build up our human Soul,

But with high objects, with enduring things,

With life and nature, purifying thus

The elements of feeling and of thought,

And sanctifying, by such discipline,

A grandeur in the beatings of the heart.

The location for this incident is usually identified as Black Crag, west of Ullswater in the English Lake District, Cumbria, which would have been seen behind the nearer ridge, Stybarrow Crag; the ‘huge cliff’ as Glenridding Dod; Mary R. Wedd suggests an alternative site near Blowick; the ‘huge cliff’ would be Place Fell (The Wordsworth Critic, 11 [1980]: 248). 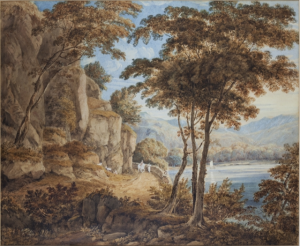 Watercolour of Stybarrow Crag by James Barrett (fl. 1785-1819), from the Wordsworth Trust online collection. Their blog at the same site is highly recommended: plenty of useful essays on Romanticism in general, and Wordsworth and his circle in particular.

Rudimentary analysis of this extract at this site.  This site has  an analysis of the extract and a handy pen drawing of the topography of the scene.

The BL site has an interesting illustrated piece on a text by T. H. Fielding and J. Walton, who spent two years in the Lake District making drawings and collecting information and ‘extracts from admired poets’ to produce their magnificent A Picturesque Tour of the English Lakes, Containing a Description of the Most Romantic Scenery of Cumberland, Westmoreland, and Lancashire…(London, 1821). The text and beautiful design and illustrations indicate that this was a book for dedicated tourists wanting to plan informed tours of the area. The book contains forty-eight hand-coloured aquatints made from the original drawings by Fielding and Walton. There are several references to Wordsworth and locations referred to in his poetry, including this boating scene.