There are 17 very short stories printed in a large font in this slim volume of just 135 pages, so they’re probably best described as flash fiction.

They were first published in German in Switzerland in 1975 with a title that translates as “Little Tales for Misogynists”, as Nicholas Lezard points out in his Guardian article about them. Rather than serving to teach misogynists a lesson, he suggests, ‘it’s something you might give a misogynist on his birthday’. Yes, “his”.

They do provide venomous but curiously affectless little accounts of some pretty horrible women. Their titles indicate that Highsmith takes mischievous aim at some stereotypical female figures in the patriarchy: The Coquette, The Female Novelist, The Dancer, The Invalid, The Middle-Class Housewife, and so on. Most of them behave despicably, and most come to a seemingly deserved or inevitable sticky end. 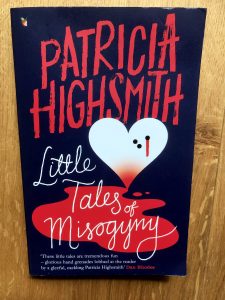 The sheer nastiness of the protagonists and the calmly detached tone of the narrative voice that depicts their atrocities before despatching them make for some uncomfortable reading. What was Highsmith playing at? Ok, she’s famous for the twisted, psychopathic behaviour of some of her best-known characters in her full-length fiction, such as Ripley. Here she seems to be up to something different from those novels that induced Graham Greene to describe her as ‘the poet of apprehension’.

The stories read like fairy-tales or parables, with more in common with Kafka’s than Aesop’s, or Angela Carter’s with the feminism and metaphysics redacted. In the first story, for example, a young man ‘asked a father for his daughter’s hand, and received it in a box – her left hand.’ It’s the insouciant irrelevance of that last phrase that causes such a tingle down the spine.

The young man not surprisingly goes mad, or ‘became insane’ as the narrator blithely puts it. The young woman visits him in the asylum ‘like a dutiful wife’. By now, it’s apparent that every time there’s one of those deceptively anodyne statements in the story, it’s going to be followed by something vicious – and it is here:

And like most wives, she had nothing to say. But she smiled prettily. His job provided a small pension now, which she was getting. Her stump was concealed in a muff.

The women in these stories behave like monstrous caricatures of the casually misogynistic male views and attitudes prevalent in the popular culture of the fifties and sixties – the ultra Don Drapers. Their men drool or despair and often, like the young man with the girl’s hand, ‘become insane’.

One way of reading the stories is to see that the women are in fact simply conforming to that male stereotype that’s been constructed for them. In Oona, the Jolly Cavewoman, for example, she’s described like a Playboy bunny:

She was round, round-bellied, round-shouldered, round-hipped, and always smiling, always jolly. That was why men liked her.

Really? What did men like about her – the curves, or the jolly smiles? Either way they’re shallow and stupid. Oona drives them crazy – literally. So whose fault is that?

Some of the women characters, however, are plain malicious. The Coquette, for example, lost her virginity when she was just ten years old. She ‘told her mother that she was raped.’ She had thus ‘sent a thirty-year-old man to prison.’ Yet she’d effectively seduced him, delighting in presenting herself as sexually provocative and alluring, and she takes pleasure in ruining his life – and his wife and daughter’s. When she pits two suitors who bore her against each other, they collude and kill her ‘with various blows about the head.’ There’s that weird tone again: it’s the detachment of a police report stripped bare of any moral stance.

The world, then, is a mean and nasty place, according to these stories. Men objectify women, who are restricted to roles as submissive, decorative housewives or sex objects. If  women strive for agency or fulfilment, like The Female Novelist, The Artist or The Dancer, they are either deluded or just randomly murdered. Feminists are as morally anaesthetised and unhinged as the Middle-Class Housewife; when they meet, there’s mayhem and death.

Are these just pitch-black comedies? There’s humour there for sure, as I hope the extracts I’ve given indicate – but it’s dark as night. Take the title alone of The Fully-Licensed Whore, or, The Wife. Shades there perhaps of Sue Bridewell’s objection to marriage in Jude the Obscure as being ‘licensed to be loved on the premises.’

Or there’s The Breeder: a woman who gives birth to 17 children in fewer years. Her husband’s friends make the expression ‘she gets pregnant every time he looks at her’ horribly literal. He has little option but to become insane. When the wife visits him in yet another asylum he suggests she stand on her head to reverse the process that seemed to instigate her fecundity. The story ends with another typically barbed banality in response to that:

“He’s mad,” Elaine said hopelessly to the intern, and calmly turned away.

It’s that blandly calm detachment and acceptance of the horrific that’s so chilling, conveyed by those two perfectly selected adverbs. Warped humour that’s not exactly funny, but insidious: it’s assumed that Elaine is quite right to have no hope.

On first reading I felt pleased that I didn’t inhabit this bizarre and unsettling distortion or moral inversion of the real world. Looking again at these narratives I’m inclined to think that maybe it’s not such a distortion. Like parables and some fairy-tales, ‘the incomprehensible is incomprehensible, and we know that already.’ In striving to rid ourselves of our daily cares we simply exacerbate them, just as attempts to interpret these tales become parables themselves.

‘Misogynists’ is probably a misnomer, then. They’re really subversive Little Tales of Misanthropy to cheer us all up.

I’ve posted on these other Highsmith titles:

A Suspension of Mercy