So far I’ve resisted reading the obvious candidates in the recently revived fashion for autofiction – the likes of Rachel Cusk, Sheila Heti, Ben Lerner – and perhaps most egregiously Karl Ove Knausgård. When I first read this ARC of Montréal writer Maude Veilleux’s novel Prague I found myself deep in autofictional narrative, and felt uneasy.

It’s a genre that’s uncomfortable with third-person narrators, invented or ‘well rounded’, invented characters and, well, plots (by definition ‘untruthful’). I’m too old, I thought, for this kind of stuff. It’s for the social media generation. 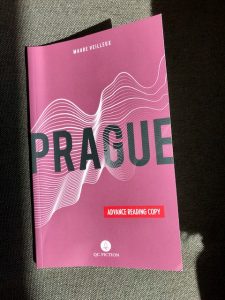 At one point our unnamed female narrator, who seems as far as I can tell a pretty close match (or alter ego) to what can be known about the real-life author, feeling depressed and in the throes of an existential crisis, writes that she ‘turned to Facebook to validate [her] existence’. Just as these shared online photos and words confirm her being ‘present in the world’, it’s a record of herself, so by making this novel similarly “authentic”, ‘I could also say: I have a book, I exist. It validated my pain.’ Elsewhere she says that writing alone could save her. Seems to me this is more than autofiction: more of a testament of fiction as personal Cartesian salvation.

The narrator self-consciously presents herself on stage, for performing at poetry readings for example, as

…vulnerable. I take care to look pretty. Perfectly groomed. Perfectly made up. Batting my eyelashes with timed grace…My fragility is my strength. But what they don’t know is that I’m a force of destruction, an enchantress. The prey and the predator.

When the boyfriend, Sébastien, sees pages of this novel in draft, and she’s afraid he’ll react badly:

He smiled, a little uncomfortable. He said: I sound like a jerk…like the boyfriend in that Nelly Arcan book, Hysteric. I hated that guy.

I told him I would be sad to lose him.

The novel opens with her and her soon-to-be lover joking about going to Prague largely because he likes Kundera. It ends with her visiting Kafka’s grave in that city, and a sort of manifesto emerges:

Maybe my interest in intimate stories lies in the encounter with the other. Without falsehood or façade.

She explains why she – this narrator – decided ‘to write autofiction in 2016, ten years after Nelly Arcan.’

I had to look her up. Sex, death and suicide; she killed herself in 2009 aged 36, as she predicted in her fiction (except there she said she wouldn’t make it to 31; Prague’s narrator is 31). These all feature prominently in Prague. The narrator admits to a ‘fascination with suicide’, even attempts it. There’s a lot of graphic sex; the narrator says she and her husband are bisexual; the affair with Sébastian is something of a departure for her. It all comes violently BDSM with him, to the point where the woman almost dies: ‘I wanted to believe he could kill me.’ He squeezes her neck harder: ‘I thought he must love me a little.’

Thanatos and Eros. The death drive and the sex instinct, destruction and creation. Maybe writing fiction is a kind of struggle with these drives, seems to be one message?

(Annie Ernaux, another exponent of a kind of confessional autofiction, is also quoted.)

When she worries that her life experience is being ruined because she writes it into her novel, and writing about it is destructive of life, the lines between reality and story are blurred. Like the enchanted (or cursed) Lady of Shalott the narrator can’t just observe the world; she has to participate, experience it, but to do so precludes artistic creativity and destroys her – life, for her, is destructive. But she enchants Lancelot with her ‘lovely face’.

So a novel about writing a novel is really a novel about living, as existentialists might say, authentically. Like all good novels? The story itself becomes the truth.

As I reread the novel I began to appreciate it more. Its choppy, curt sentences, the fragmented structure, non sequiturs and non-linear narrative, chronological shifts. It’s not an imitation of real life, after all, or stream of consciousness. It’s as much a construct, a fiction, as more conventional fiction. Hence all those literary allusions.

On p. 88 the narrator inserts this one line paragraph:

Lies are a device often used in fiction.

If all novels are lies (it’s the Cretan liar paradox) then so is autofiction. For all its apparent self-revelation, unveiling and demasking, its self-absorption, it’s still fiction. This is on p. 77:

The height of narcissism. To make a novel of yourself. To make yourself into a novel to give yourself a little meaning. Mostly, to be afraid of not existing.

I have no way of knowing if this is ‘true’ – but it’s as valid a form of fiction as Kafka’s tortured explorations of identity and reality, or Melville’s, Chaucer’s. In fact all fiction, as Philip Roth has kind of suggested, is a sort of autofiction – but it’s not autobiography.

No shaping, no representations. Creating characters didn’t really appeal to me anymore. What could I do with those invented lives?

Jonathan Gibbs at his blog Tiny Camels, wrote about autofiction last year here. He says (much more coherently than I’m doing in these ramblings) it’s possible to like this kind of fiction and the other, more conventional kind. They’re not necessarily mutually exclusive – provided we don’t condemn the kind of narrative that adopts anything other than the ‘I am a camera’ kind of approach, subverting and disrupting the reader’s position. Who can tell how ‘invented’ the lives in any work of fiction can be? Look up the person’s biography and compare the fiction: they’re different, even if there’s a superficial resemblance in the detail. See how that phrase about batting the lashes ‘with timed grace’ works in a way that surely couldn’t in non-fiction.

This has turned out to be not so much a review as a musing. A muddle. Sorry about that. I’m still trying to figure out what I make of this exhilarating, baffling novel.

Kudos to Montréal publishers QC Fiction for continuing to turn out risky and unconventional translations of Canadian fiction.