Max Beerbohm, Zuleika Dobson. Penguin Modern Classics paperback, 1961 (before they started the grey covers; this one has a cover design by George Him). First published 1911

Beerbohm (1872-1956) wrote in a preliminary Note to this edition, with characteristically arch indignation, that responses to the novel on first publication wrongly took it to be:

intended as a satire on such things as the herd instinct, as feminine coquetry, as snobbishness, even as legerdemain; whereas I myself had supposed it was just a fantasy; and as such, I think, it should be regarded by others.

It’s never safe to trust such authorial protestations, especially from ‘the incomparable Max’ (as Shaw called him; ‘Compare me, compare me’, Max responded – one of his better witticisms). And he goes on to say that all fantasy should ‘have a solid basis in reality’. Zuleika Dobson portrays Edwardian Oxford University life with what I take to be an accurate eye (Beerbohm was at Merton, but never completed his degree: he’s not a great completer, which is maybe why he never produced the great full-length literary work his contemporaries expected and longed for from him). 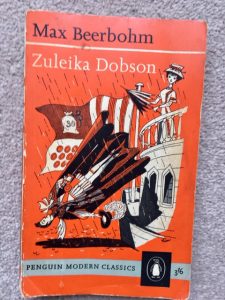 Although published in 1911, this novel was several years in the writing, and reflects Max’s early period obsessions: the Aesthetic Movement – he wrote for the Yellow Book, working with the likes of Wilde and Beardsley. – and the Classics; the novel is full of portentous quotations from and allusions to Greek and Latin literature and myth. This gives it part of the ostentatious, pompous tone that I found, frankly, repellent (and I won’t get started on the mass suicide plot). A recurring choral note referring to the ‘grim busts of the Roman Emperors’ staring down on the drama unfolding below them is another jarring note for me.

Here’s an example of that florid, overwritten ‘poetic’ style, which starts on page 1, and carries on relentlessly throughout; this is from the second paragraph of the novel. The scene is Oxford railway station, where the train bearing the eponymous heroine is just arriving:

At the door of the first-class waiting-room, aloof and venerable, stood the Warden of Judas [ie Merton]. An ebon pillar of tradition seemed he, in his garb of old-fashioned cleric.

I’ll stop there; the prose is so purple I can only take it in small doses. Max, in this narrative dandy persona, adores inverted syntactical structures, preferring to use fronted adverbials, delayed verbs, and miniature inversions embedded in these larger ones (‘stood he’; why not ‘he stood’?!).

Then there’s the overwrought vocabulary, that arcane, aureate diction; Max is striving too hard for comic-poetic exuberance: ‘an ebon pillar’. OK, it’s meant to be funny. It isn’t. ‘Garb’ isn’t funnier or cleverer than the plainer alternative.

The paragraph goes on in similar inflated style:

Aloft, between the wide brim of his silk hat and the white extent of his shirt-front, appeared those eyes which hawks, that nose which eagles, had often envied.

This is the tortuous, self-consciously rhetorical style suitable for a Roman orator, not a comic novel – that it was published in 1911 doesn’t excuse it. This is the style that was to influence early Evelyn Waugh, probably Wodehouse, maybe others (early Huxley, perhaps). So he has a lot to answer for. At least they saw the light and went on to better things (perhaps not PGW, who found his niche and stuck in it, sensibly).

The description goes on:

He supported his years on an ebon stick. He alone was worthy of the background.

Ah, that’s why he’s an ‘ebon pillar’. Still not funny. But that last sentence is good – and funny. But even then it manages to turn the scene into a painting. It’s intended to be ironic, this juxtaposition of the foppish ‘aesthetic’ with the mundane reality of an old man on a station platform, meeting his granddaughter. I don’t see the point.

The next paragraph carries on in the same style:

Came a whistle from the distance.

Then comes the first of dozens of uses of the poetic-archaic ‘ere’ (not ‘before’), sometimes preceded by dud effulgences like ‘insomuch that’. Paragraph four includes ‘cynosure’ (well, here it is appropriate), and ‘Him espying, the nymph darted in his direction’. That is, Zuleika walks towards her grandfather.

Robert McCrum placed this novel at no. 40 in his list of 100 Best Novels in the Guardian in 2014. He gives a summary of the plot there, saying that it is

a brilliant Edwardian satire on Oxford life by one of English literature’s most glittering wits that now reads as something much darker and more compelling. Readers new to Max Beerbohm’s masterpiece, which is subtitled An Oxford Love Story, will find a diaphanous novel possessed of a delayed explosive charge that detonates today with surprising power.

Yes, Max writes what reviewers tend to call ‘lapidary’ prose, but as I hope my brief examination demonstrates, it’s not to my taste, over embellished. I read in another review, I forget where, that readers tend to either love or hate Max’s work. I’m in the latter group.

Oh, yes, and he’s beastly about the Americans.

One very funny passage, just to redress the balance. This Edwardian Kardashian, Zuleika, is passing the Front Quadrangle of the college, where there are some chained-up dogs:

Zuleika, of course, did not care for dogs. One has never known a good man to whom dogs were not dear; but many of the best women have no such fondness. You will find that the woman who is really kind to dogs is always one who has failed to inspire sympathy in men. For the attractive woman, dogs are mere dumb and restless brutes – possibly dangerous, certainly soulless.

She stoops down to pet this unfortunate dog as an act of coquetry, not genuine affection, to awaken envy in her male companion:

Alas, her pretty act was a failure. The bulldog cowered away from her, horrifically grimacing. This was strange. Like the majority of his breed, Corker…had been wistful to be noticed by anyone…No beggar, burglar, had ever been rebuffed by this catholic beast. But he drew the line at Zuleika.

See what Max can do when he stops the posturing? This is genuinely funny, and the first part of my quotation has an aphoristic quality worthy of Oscar. But he still can’t resist calling the dog a ‘catholic beast’; old habits die hard. That’s the kind of 18C grandiloquence that Wordsworth (at least in his younger days) tried to reform, a century before Max.

As I was in Portugal when reading this, and it was the last book I had with me, I was stuck with it. Mass suicide played for laughs, written mostly (there are a few worthy exceptions, as I’ve indicated) in a style that makes Pater look like Hemingway – no. Fortunately, there were Chekhov’s stories on my Kindle.

Let’s end with a few more pictures of the Fuzeta scenery of E. Algarve. At least it’s natural – which is impossible to say of Zuleika Dobson. 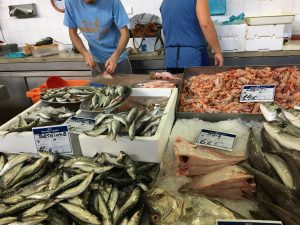 I didn’t choose my holiday reading at all successfully. 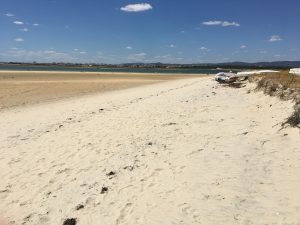 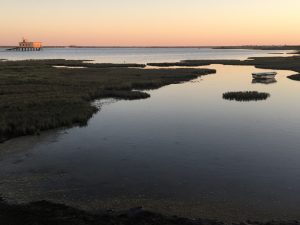