I bought a half-price bundle of Bulgakov novels from Alma as I’d never read his work before, and thought I’d show some solidarity with war-scarred Ukraine. I started with the surreal-satirical The Master and Margarita (posted about last month HERE).

The White Guard is an early, largely autobiographical novel begun in the early 1920s. It took Bulgakov years to complete, and went through many redactions. A final version in Russian proofread by Bulgakov was published in Paris in 1929 – there was a substantial émigré Russian population there. It wasn’t published in a complete version in Soviet Russia until 1966. Again it’s highly relevant to the terrible situation in Ukraine today.

It’s set in Kyiv in the harsh winter of 1918-19, a ‘great and terrible’ year, as the novel’s opening words describe it, when the city was shelled and besieged by right-wing nationalist forces exploiting the departure of the German troops who’d defended it until their defeat in November in WWI. There’s a scattered, ineffective defence by raw cadets and a few officers – most of whom had deserted. They’re under-equipped, disorganised and overwhelmed by superior opposition forces – similar in many ways to the tragic events that are taking place in Ukraine now.

Everyday life in Ukraine’s capital has become terrifyingly dangerous. Then, as now, its citizens hear the awful sounds of artillery shells bursting ever nearer the centre of the city. Their attackers show no discrimination in their assault: then as now the tactic is to annihilate the fabric of the cities attacked, and to drive out the inhabitants or kill them if they remain. Arbitrary acts of anti-Semitism and cold-blooded murder are frequent.

The plot centres upon the Turbins, a cultured bourgeois White (pro-Tsar, with allegiance to pre-revolutionary Russia) family and their close circle of friends. Alexei, a young military doctor (as Bulgakov was) is wounded in the conflict and narrowly escapes death (possibly after a mystical intervention by the Virgin Mary). His sister Yelena’s husband, an officer in the Ukrainian forces supposedly defending them, has (like most of his peers) deserted his city and his wife.

It’s a stirring, gripping account of ordinary city folk enduring terrible hardship at the hands of a cruel and murderous enemy – the nationalists are about to be succeeded in their onslaught by the Bolsheviks (Reds). This is perhaps why Bulgakov’s stage play based on this novel was said to be Stalin’s favourite, and why the author was not sent to a gulag or executed, rather than just censored: he portrays the invincible, crushing might of the Bolshevik revolution, against which the Chekhovian bourgeois-liberal ignorance and dreaminess of the likes of the Turbin family and their friends are inevitably doomed to be eliminated.

The style has a modernist, fragmented approach (songs, poems, dreams) and tone that reminded me of Döblin’s Alexanderplatz, among others (maybe Dos Passos, too, with its random snippets of newspaper stories and unattributed dialogue). Eisenstein’s montage technique in film also comes to mind – especially in a parade/religious service scene near the end when the nationalist forces are celebrating victory.

Amid all the savagery Bulgakov shows love and hope in this family and their friends. There are some apocalyptic and literary allusions (especially to War and Peace and more generally to the fiction of Dostoevsky), strange symbols and magical/surreal moments, as in The Master and Margarita – see the link above to my post. Some of these contribute to the sense that none of the factions in this terrible war is perfect; the focus on the White Turbin family presents them with all their illusions, prejudices and flaws, while the nationalists and Reds who are about to crush their lives and culture are portrayed more as ruthless ideologues rather than the romanticised saviours that Stalin would normally have preferred in such representations. It’s all, as Stephen Blackpool says with characteristic stoical bafflement in Hard Times, a muddle.

I read it while suffering from a heavy cold, which added to the sense of weirdness in the narrative. If you’re feeling overwhelmed by the dreadful news from Ukraine that fills our airwaves daily, then you might prefer to give this novel a miss. On the other hand, it provides vivid historical context to these events, a salutary reminder that Soviet-sympathetic Russia has always had designs on Ukraine’s territory and people, and is convinced that it has an imperialist (if not divine) right to sovereignty over a nation whose separate, independent and autonomous existence it refuses to recognise or respect.

Mikhail Bulgakov, The Master and Margarita. Translated from the Russian by Michael Glenny (Everyman’s Library, 1992)

I thought I’d show some solidarity with besieged, invaded Ukraine by reading this novel by Kiev-born Bulgakov (1891-1940). He began work on it in 1928, and worked on various drafts until just before his death. It was first published in censored form in Russia 1966-67 and in smuggled-out versions in Paris and Frankfurt over the next couple of years. The first complete Russian edition appeared in 1973. It was dangerous and futile to try to publish anything under Stalin’s murderous regime that showed even the slightest hint of anti-Soviet thinking. As a large part of this novel pokes gleeful fun at the corrupt ways of Muscovites in that era, its fate was always going to be troubled. 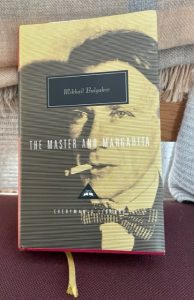 It’s a coruscating novel teeming with surreal incident and characters in multiple storylines. At its heart is a passionate love story between the two in the title. Margarita, who doesn’t appear in person until Book 2, ch. 19, is unhappily married when she meets and falls in love with the unnamed master. His novel based on the story of Pontius Pilate’s crisis of conscience after sentencing Jesus to death has troubled him so much he burnt the manuscript. This reflexive part of the plot mirrors the struggles Bulgakov had with this novel. ‘Manuscripts don’t burn’, says the devil to the master when his MS miraculously reappears, intact. It could serve as the moral of this novel – censorship can only partially silence truth.

Margarita gets caught up in the small retinue attending on Satan on his visit to Moscow, where he causes mayhem with his trickster’s black magic and mischievous sending up of the venality and greed of its citizens. She acts as sexy hostess to his spring ball, a macabre event attended by the undead. There’s witchcraft and poison, decapitation and shape-shifting.

Interspersed is the story of Pontius Pilate and the crucifixion, then the master’s version. So it’s a novel, among other things, about writing novels: the blurred boundaries between supposed real life and fiction. No matter how fantastic and supernatural the story becomes, the narrative is always conveyed with conviction.

Just what it all means is difficult to pin down. It’s easy to see a satire on Stalin’s soviet regime – but it’s never overt or heavy-handedly done. There’s a lot of fun poked at the literary world in particular: the writers’ club members enjoy a hedonistic life while promoting artistic mediocrity, and critics attack the works of honest writers striving to say something worthwhile and original, like the master.

It seems also to show how a totalitarian regime imposes its own version of ‘truth’ on its people. What we now call fake news. It’s about morality and its opposite, or absence, good v. evil – among other things. If the state decrees you’re all atheists, what do you do when the devil shows up? If there’s no God, then how can you believe in the devil?

There’s a lot of dark humour. Particular satisfying are Satan’s attendants. Foremost among these is Behemoth, the wise-cracking, talking cat who rides the tram (and dutifully pays his fare), shows off his pistol-shooting skills (though these aren’t as good as he boasts), and relishes making fools of the police when they try to arrest him.

The humour and surrealism have a Gogolian/fantastic edge, maybe even a whiff of Lewis Carroll (though I have no idea if Bulgakov knew his work), but this is tempered by the lyrical historical-realist style of the Pilate passages.

This might all sound a bit of a dog’s dinner, but Bulgakov manipulates his material with such panache that it just about works. I did find some of the satanic antics sections went on just a little too long at times, but the overall zest of the narrative kept me turning the pages.

I gave up trying to figure out what the ultimate message might be, and just enjoyed the whole Walpurgis-night broomstick ride.

The bottom bar told me at the end of that last sentence that this post contained 666 words. I couldn’t leave it like that…