I’ve just finished a book of short stories by Elizabeth Jane Howard; some of them were quite nasty. I need to think about them some more before posting on them.

So another of my occasional asides into language today. I’ve been collecting words for as long as I can remember; I like to note down new ones (to me), or others that I just like. Here’s one I came across in a nature column in The Times recently: petrichor. It’s funny isn’t it how a word you were unfamiliar with seems to keep popping up once you’ve clocked it. It was used soon afterwards on a not particularly memorable Netflix programme, ‘The Wilds’. It was a sort of Lord of the Flies/’Lost’ mashup with teenage girls on an island. One, a studious type, used petrichor in a flashback scene of a family game of Scrabble.

It means the pungent smell of earth after it’s made damp by rain. From Greek petros, rock, and ichor, the fluid that flows in the veins of the gods in mythology.

One word leads to another. My online dictionary pointed me to related words: argillaceous: of, or containing, clay (Latin argilla; Greek argos, white).

The word minaudière appeared in an auctioneer’s ad in our local paper last month. It was an item that featured in a recent sale. According to Wikipedia the word was a French term for a coquettish woman or flirt, from the verb “minauder” (to flirt or simper – so not very politically correct. I rather like that word “simper” btw).  It’s a (luxury) women’s fashion accessory, a kind of decorative or jewelled evening bag with cases or compartments for cosmetics or other small items. It was first used in the 1930s and attributed to Charles Arpels of Van Cleef & Arpels. Minaudières were usually metal plated, oblong, sometimes made of gold or silver, lacquered or covered in stones or mother-of-pearl. Some were fabric – brocade, silk. Some had a lanyard or chain to place over the wrist.

A linked article describes an étui: a woman’s ornamental case, usually carried in the pocket or purse, for holding small items like folding scissors, hairpins, bodkins (another fine word), etc. The word derives from the French for prison – a place for being shut up or confined. They were usually another expensive accessory and made of ivory, precious metal, tortoiseshell, or…shagreen. But I’ll not go down that linguistic rabbit-hole.

I went for my first bike ride in months today. It was a beautiful day: crisp but clear, with mostly blue skies and plenty of sunshine. I’ll end with some pictures of another tidal creek, not far from the ones I posted last time. Even when the tide is low and there’s lots of mud on show, it’s still a lovely sight. Curlews call and add to the sense of tranquillity. 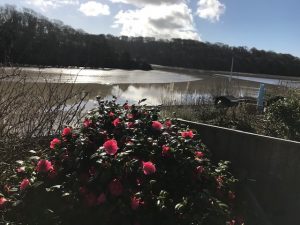 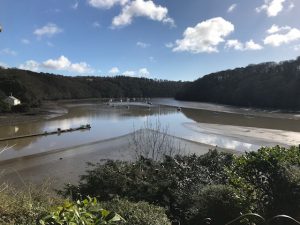 The same creek at its confluence with another river. Didn’t have my glasses on, so these are a bit blurred, I’m afraid 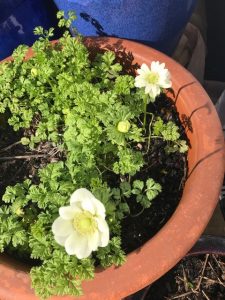