I enjoyed Quebec publisher QC Fiction’s The Brothers (reviewed here); Listening for Jupiter by Pierre-Luc Landry – out next month – is an engaging, highly original addition to their list. The blurb calls it ‘magical realism with a modern, existential twist’. That doesn’t do it justice: despite the elements of surrealism, it seems firmly rooted in some kinds of reality – several kinds simultaneously. 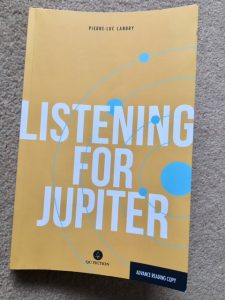 Like Patrick McGrath’s Constance (reviewed here last month)the novel consists of two main alternating first-person narratives: the first is that of a student with the unlikely name Hollywood, initially living in Montreal, where a weird meteorological phenomenon has brought ten months of unseasonable ‘everlasting summer’ weather, and ‘brutal’ sunshine (25 degrees Celsius ‘last February’ and ‘no ground frost in over a year’; forest fires rage in in Quebec). He’s not an assiduous student, and shows more interest in the beans he’s planted in the graveyard where he works part-time, and in the main passion of his life – music (there are frequent references to his favourites, Leonard Cohen and Joni Mitchell.)

The second is that of Xavier Adam, a pharmaceuticals salesman based in Toronto, but whose job – which he hates – takes him from London to Bilbao to New York. His passion is films. In his parallel universe, there’s the opposite kind of freak weather phenomenon: the western world is gripped in an ice age of ‘endless winter’ caused by ‘a depression of unheard dimensions’. A TV weather reporter says

it’s difficult to talk about this storm in rational, scientific terms.

The same could be said for this novel.

Xavier, like Hollywood, is in ‘a state of unhealthy melancholy’; he feels ‘alienated from the rest of the world’. His life lacks meaning, and takes place in anonymous hotel rooms and conference halls. His routine on entering these places is to disengage:

It’s a habit of mine, and whenever I’m in the mood for a little tragedy, I just switch off like that – somehow it seems to suit my lousy existence.

Death seems a welcome prospect; he flirts with it. ‘Nothing much gets me going other than food, booze and DVDs’, he tells his work partner. He uses bland TV shows like an anaesthetic:

to help me forget that there’s no great misfortune to blame, nothing to explain my beautifully blasé attitude.

Both men have difficulty sleeping, and rely on pills to nod off: both of them dream, and in their dreams they meet. The novel traces their separate, converging trajectories through their respective bleak, joyless worlds towards their destiny: a meeting in some zone that may or may not be located in any kind of reality.

Interspersed with their converging narrative arcs are Hollywood’s enigmatic free-verse ‘unauthorised’ poems (whatever that signifies); ‘I am an ominous dream’, one of them ends.

Feeling alienated from the rest of the world. Also a need to examine the existence I keep doubting…

By day I skate circles. In every sense.

The only person he has to talk to about this angst is the ‘weird guy’ he meets in his dreams. They’re oneiric soulmates.

Hollywood has his own ontological doubts. These are exacerbated by his dismaying disclosure that he believes  he had his heart surgically removed and replaced with a ‘little machine’. As a consequence he suffers from frequent cramps and unsettling spasms of pain. At such times he’s inclined to ‘check [his] pulse or whatever.’ That characteristically flippant ‘whatever’ is symptomatic of Landry’s ability to make the abnormal – even downright surreal – seem quite acceptable.

During one such episode Hollywood loses his equilibrium:

It was as if nothing, in itself, truly existed: the objects around me, the things I was still doing, the music…It all looked and felt a certain way because of how my brain perceived it. If I ceased to exist, if I stopped breathing, what would become of it all?

The final narrative element consists of sections titled ‘After the sandman’, when some kind of omniscient voice reflects on their dream meetings, commenting enigmatically (if they disappear then meet again, who knows where or how, ‘what difference does it make?’) During these meetings, they question themselves whether they’re really dreaming, or are these moments reality, and the ‘real’ world is the fantasy? ‘I’ve stopped trying to understand,’ says Hollywood when their meetings culminate in Montauk, Long Island. The Montauk sections represent yet another possible dimension of reality.

Both of them mysteriously fall into comas for weeks on end. An Albanian woman goes into labour in the street, and Xavier gallantly takes her to hospital. He becomes obsessed with finding her again when she disappears. She plays an increasingly important role (a catalyst of sorts, or a chorus; it’s notable that she’s an actor/dancer) as the novel moves inexorably towards its breathtaking denouement (in which nothing is really untangled; the threads are just rearranged impeccably).

Unifying motifs are that a TV documentary about Jupiter recurs, and shooting stars are frequently falling from the sky (one of several echoes of Camus). Some shatter on entering earth’s atmosphere and smash windows (and buildings) near to our characters. Jupiter and its moons loom larger for both of them as their quests converge. They listen for the planet’s radio waves. They scan the skies.

It’s an intriguing novel about the biggest of topics – the nature of truth and existence, the conditions for real human connection – which Landry orchestrates with ingenuity and dry wit into an offbeat kind of cosmic road-movie. I was about to say ‘dystopian’, but the ending precludes such an interpretation, despite the huge death-toll caused by the savage weather.

Listening for Jupiter has the spare prose of a ‘dirty realist’ like Carver, while the two central characters exude the restless, cool existential ennui of a character from Kerouac, had that other Canadian been able in a parallel world to read Murakami – there’s the same epistemological uncertainty.