Old Baggage is a prequel to Lissa Evans’ earlier novel Crooked Heart, posted about here in March. Mattie Simpkin is struggling to find purpose after the partial achievement of the goal of the radical suffragist movement, specifically the WSPU, to which she’d belonged earlier in her life. It’s 1928, not a random choice for the historical setting; it was the year of the Equal Franchise Act, which gave all women over the age of 21 the right to vote, whether they owned property or not. 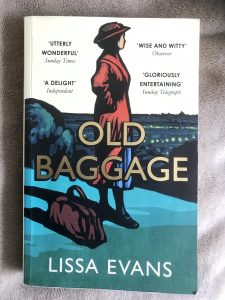 Desperate for a project into which to pour her indomitable energy and sense of outrage at the patriarchy (she’d been a vigorous exponent of direct action and civil disobedience, and still carries a wooden club in her handbag), she persuades young, largely working-class girls to join her eccentric ‘Amazons’ club on Saturday mornings in the park. Her bossy regime involves instilling in the girls the virtues of debating and recreation, such as healthy outdoor activities – including unladylike javelin-throwing. Asked about the point and propriety of this, she retorts with a typically cadenced and fiery aphorism worthy of her idol, the 17C author and priest Thomas Fuller:

“As a protest; as a means of defence; as an exercise in coordination. Weapons are not only for those who begin disputes, they are for those who wish to end them.”

She fails to realise that for most of these girls attendance probably means forgoing their one ‘lie-in’ of the week; on all the other days they rise early from bed to go to their menial, gruelling jobs, or to help out, like leading light Ida, with the never-ending ‘women’s work’ in the domestic sphere which is their destiny. The younger ones are missing out on less high-minded pursuits: boys, the cinema, fairgrounds.

The third aspect of this eccentric club’s aims, Mattie explains, is training. When a girl asks training for what, she replies, with similarly grandiose eloquence:

“For your lives as twentieth-century women, to enable you to take your places as equals in society, in Parliament and in the professions.” 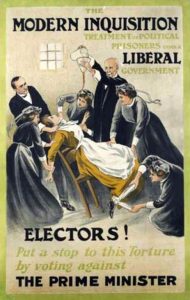 What’s interesting and unusual about this novel is that the author confronts the essential dilemma of her middle-class protagonist in ways that expose the problem for women like her in bringing her laudable social and political ideals – Mattie always makes her girls feel valued – into line with the reality of the privileges and ease of her class, in contrast with the deprivation and squalor endured by most working people at that time – Mattie’s struggle isn’t anything like as tough as theirs.

She’s what is sometimes disparagingly called here in the UK a champagne socialist. Evans is excellent at portraying Mattie’s genuine and resolute ambition to encourage young working-class women to fulfil their potential against all the odds stacked against them. But she’s an idealist who misguidedly believes that good intentions and (invoking her beloved literary-philosophical guru Thomas Fuller again) ‘invincible determination’ are all that’s needed to ‘accomplish almost anything,’ which in her case means equality for all. She lacks insight into herself, her protégées and her motives, and empathy with those closest to her.

It’s revealing that Mattie reveres Fuller, the biographer, historian and divine. Like him she adores linguistic elegance and exuberance: epigrams, words as weapons. She must also have been aware that he’s an unlikely hero for a left-leaning rebel like her; he supported the Royalist cause during and after the English Civil War, using his wit and literary brilliance to oppose the revolutionaries.

Evans is thus covertly signifying the basis of Mattie’s problem: she’s a single-issue campaigner who believed that women’s suffrage would eradicate every frustration they endured under the patriarchy.

The most cogent aspect of this highly entertaining novel is Mattie’s learning a painful lesson: that for equality for women to be achieved would involve a seismic change in society. It’s a critique of those middle-class suffragists and radicals like her who failed to recognise this. Former bourgeois suffragist icons like the Pankhursts are accurately portrayed in these pages as abandoning their cause to become ultra-nationalists during WWI – the kinds of flawed idealists that Mattie very nearly becomes.

But she does undergo an epiphany as a consequence of her pig-headed self-righteousness. Women she betrays or lets down teach her that any cause is bigger than her own ego, and that not all women have the leisure or wealth to support a pet project that will simply provide cosmetic improvement to the illness, humiliation and degradation endured by the working classes – and particularly women – in the early 20C. She learns a salutary lesson in humility, the importance of loyalty to her friends, and in not letting sentiment and impetuosity cloud her judgement.

One crucial aspect of the anti-climax felt by radical activists once the purpose of their cause has apparently been achieved is revealed in Old Baggage with the sad fates of some of Mattie’s former fellow-suffragists, now, like her, rebels without a cause. Ten years on they’ve mostly become middle-aged and lost. Some are sad alcoholics; several have become seduced by the rise of fascism – a sinister presence throughout the novel, seen especially in the macho militaristic struttings of a Mussolini-loving ‘Empire League’ that one of these former suffragists promotes with the support of her Mosley-esque politician husband to rival the proto-hippy free spirits of the Amazons; some will bow to the inevitable and marry – for middle-class women there was no other socially acceptable destiny.

In an echo of that ambivalently feminist 1893 novel by George Gissing, The Odd Women, Etta, one of these superannuated suffragists explains, aware that she’s potentially selling out the sisterhood, why she’s considering this matrimonial escape: she’d hate giving up her work as a health visitor helping working women and their families who lived in poverty and disease, but would like babies of her own. Besides, she adds, she was lucky to find a man at all; most women don’t. At a recent school reunion she attended, nineteen out of the thirty girls in her class were ‘spinsters’:

“…apparently, the newspapers are calling us ‘the surplus women’. “Like a drawer full of forks,” my friend Minnie said, “when all the knives have been stolen.”

This novel is full of sympathy for women’s fight for emancipation and equality at this period of history (a fight that’s still in progress) but it never descends into cosy nostalgia or rose-tinted sentimentality; there’s a tough edge to it, a strong sense of the harshness of the struggle, especially for women, and many of the female characters depicted suffer tragedy and terrible hardship. The betrayal the novel portrays of the suffragist cause by some of its erstwhile leaders and the parallel rise of fascism are timely warnings for our own era.

For further insight into this topic I recommend a set of materials at the British Library website under the heading ‘Votes for Women’, especially an article there written by historian Sarah Jackson: ‘”Women quite unknown”: working-class women in the suffrage movement.’ It provides a fascinating account of the Suffragist movement – especially women from the working classes, who were singled out for much more brutal treatment by the police and penal system, including vicious beatings, illegal incarceration and torture. The leaders of the various factions in the movement were largely upper class, treated with relative deference by the law, and suspicious of the broader egalitarian and libertarian aims of their less privileged sisters.

Lissa Evans has given stirring fictional voice to some of these unknown women – not ‘odd’ or ‘surplus’, but effective and heroic in ways that Mattie comes to recognise involved greater sacrifice and heroism than her own well-meaning but misguided, flamboyant posturing.

Noel, the little boy who becomes a key character in the sequel, Crooked Heart, set over a decade later during WWII, appears at the end of the novel as a means for Mattie to put right the mistakes she’s made and redeem herself.