Not the most inspiring of titles. Its novelist narrator, who we met in My Name is Lucy Barton (links below to other posts on ES novels), tells us more about the events in that earlier novel. For example, that her hospital stay in New York was for a real – and serious – condition, and her estranged, damaged mother really did visit her. She might also have loved her equally damaged daughter, Lucy. Just couldn’t say or show it. Or act upon it. 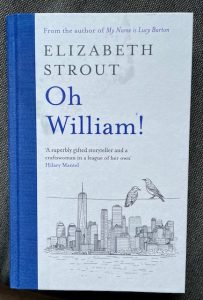 There’s more of that kind of thing in Oh William! Here the slender plot has to do with Lucy’s ex-husband, the hapless William, who was (still is) a serial adulterer. Most of his actions cause Lucy to utter the exclamation in the (silly) title. Usually out of exasperation, sometimes pity (maybe even love).

She exclaims in similar ways about others, including herself. Life exasperates her. The cruel, deprived upbringing she told about in Lucy Barton is alluded to in order to account for her present diffidence, her sense of not belonging in the world, and lack of self worth – even as she nears William’s age, 70. She says several times she feels ‘invisible’. ‘What a strange thing life is.’

Strout is able to pull off these banal expressions as Lucy’s only available means of articulating her profound, turbulent emotions. The narrative is told from her viewpoint, and it’s colloquial and idiomatic like that all the time (she’s very fond – overfond – of ‘is what I mean’ after an attempt to explain something). But that’s not to say it lacks complexity or depth. She’s more George Herbert (without the spirituality) than John Donne.

After her various scrapes with William as he tries to find out the truth of his own troubled past in rural Maine, she feels close to him, even sad they divorced, but validated that they did. More to the point, she learns a bit more about herself and her dislocated sensibility. On almost the final page she repeats ‘Oh William!’, then goes on:

…don’t I mean Oh Lucy! Too? Don’t I mean Oh Everyone, Oh dear Everybody in this whole wide world, we do not know anybody, not even ourselves!

Except a little tiny, tiny bit we do.

But we are all mythologies, mysterious. We are all mysteries, is what I mean.

This may be the only thing in the world I know to be true.

Other posts here at T Days on ES novels: