I bought this for Mrs TD, who so enjoyed it she urged me to read it when she’d finished. I was less enthusiastic. 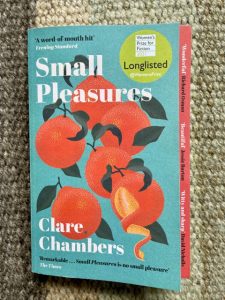 I did enjoy the depiction of the central character, Jean, a middle-aged small-town newspaper journalist whose existence has shrunk to that of a Barbara Pym routine of longing for love and kindness while caring for an ungrateful, spiteful and embarrassingly rude old mother. When she does find a caring, sensitive man who returns her love, there’s a strong sense of fulfilment but also of foreboding.

This is the best element in the novel: a heartwarming and moving portrayal of the kind of woman not often given such scrupulous and sympathetic authorial attention.

The virgin birth plot is less satisfactory. Jean is investigating the extraordinary story of a woman who claimed she’d given birth to her daughter, now aged ten, without the intervention of a man. Chambers strings out this mystery for over 300 pages, and I felt she sort of lost interest in its outcome about a third of the way through.

There’s an early spoiler, too, which partly caused my lukewarm reaction to the central plot.

I’d recommend Small Pleasures, however, as a not too demanding and often very touching portrait of a woman who thought her chances of experiencing love and passion again had vanished. There’s always hope, even though life has ways of thwarting those chances. 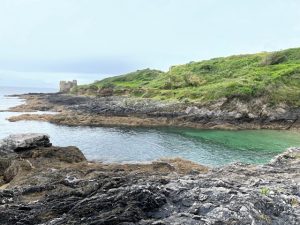 I’ve been pretty busy with a work project lately, hence the silence of the blog. So I’ll finish with a few images of some recent small (summer) pleasures in Cornwall. Between work sessions I’ve been enjoying coastal walks with Mrs TD. This cove is near Pendennis Castle (built in Henry VIII’s reign) in Falmouth, where we went early this month. The footpath takes the walker past some smaller, less venerable and imposing military installations that would also have guarded the entrance to the Carrick Roads and Falmouth docks and harbour. Just before I took this picture of the pleasant cove a seal popped its head up and scrutinised us with what looked like a mix of interest and disappointment. He’d gone by the time I got my phone out, unfortunately. 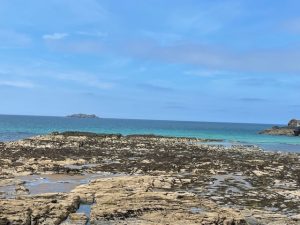 The following week we went up the north coast beyond Padstow, now brimming with posh London tourists, to the less frequented and beautiful beach at Trevone. This picture shows the rocky foreshore nearby; the sandy beach is just to the right of it. We’d read about a rockpool a short walk along the coast. It turned out to be an ideal little natural swimming pool, without the currents and waves of the open sea. Three generations of families were enjoying it at the same time as us – there was a lovely sense of shared (small) pleasure. 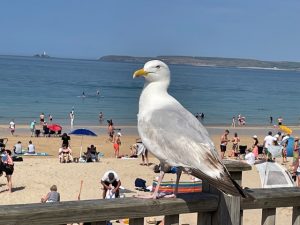 A few days later, during Britain’s week-long hot spell (aka summer), we returned to Carbis Bay with Mrs TD’s sister and brother-in-law. When I reported about this beach last month, just as the G7 conference was ending, it was closed to visitors; now it’s much busier – but still didn’t feel crowded. Here’s my usual picture of a truculent seagull, glaring at me for having the effrontery to take its picture without some sort of recompense. Godrevy lighthouse is just  visible in the background. This is the one that (partially) inspired Virginia Woolf’s novel To the Lighthouse; as is well known, she and her family used to holiday regularly at St Ives, just round the headland from Carbis Bay.

Now we’re back to cooler weather and showers. But there are occasional swooping, screeching groups of swifts over our house to brighten the days.