I haven’t posted here for a while because of work commitments, a week’s holiday in Dorset with Mrs TD and two old friends, then more work. 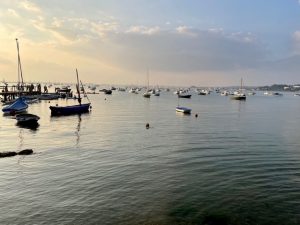 The shallow waters of Poole harbour

We rented a house on Sandbanks, the weird spit of land, originally a string of sand dunes – just a few hundred metres wide and maybe a couple of kilometres long, sticking out into the huge natural harbour of Poole, on the south coast of England. Sandbanks is said to have some of the most expensive real estate in England: there are huge glass and steel architectural fantasies, mock-Spanish colonial mansions, art deco ship-houses, and a scattering of the original pre-WWII houses of more humble proportions. It’s a cross between Beverley Hills and Bournemouth (just a mile or two up the coast, and much more down-market). How they managed to build massive houses on foundations of sand defeats me.

Our house was one of the originals, built in the mid-30s: art and crafts, with terracotta tiles and attractive angles and details. It was right by the terminal of the chain car-ferry that plies across the narrow entrance to the harbour, linking Sandbanks with the mainland promontory on the far side of the harbour at Studland. Gin palaces, yachts, jet skis and pleasure boats constantly sailed or buzzed past, playthings of the wealthy holiday-home owners who were our temporary neighbours.

There was an air fair at Bournemouth the first weekend. We were aghast to hear that a biplane with a wing-walker that we’d seen fly over our garden had crashed into the harbour near the ferry terminal just minutes after we’d been sitting on a bench admiring the view there. Fortunately, the pilot and passenger survived with just minor injuries. 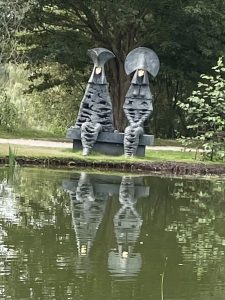 These striking figures are called ‘Grandees’. They look a cross between Egyptian gods and revellers at a Venice carnival

The highlight of the week was a visit to Sculpture by the Lakes. Simon Gudgeon gave up his city job to buy a former lake fishery to concentrate on his sculpting – especially his beautifully graceful images of birds and aquatic animals. He positioned some around the picturesque pools, where they fit beautifully, and finally decided, as the collection grew, to include sculptures by other artists, and to open the place to the public. My favourites are included here. 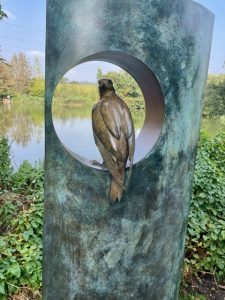 Another day we took the ferry across to Studland and on to Swanage on the local bus (to avoid the massive queues of cars; buses have priority). After lunch on the promenade, we caught the vintage steam train for the short trip to Corfe Castle. 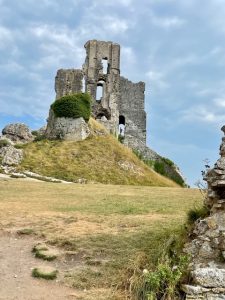 This is a dramatic ruin on top of an implausibly high, steep hill. Its construction started under William I a few years after his victory at Hastings in 1066. Subsequent monarchs extended and modified it until it passed into private aristocratic family ownership. During the Civil War in the mid-17C the family supported the Royalist cause of King Charles I. They were besieged and defeated by the Parliamentarians, who destroyed the castle to prevent it being used for military purposes again. Handsome grey sheep graze the rich undergrowth on the hillsides beneath the walls.

For most of the week we had beautiful sunny weather, and were able to spend time on the beach and swimming in the (not so cold) sea. With a bit of imagination the miles-long sandy beach could have been mistaken for South Beach, Miami (without the pastel lifeguard posts).

Towards the end of the week the weather changed: cloud and mist. The queues of cars for the ferry dwindled, so we were able to take the car across to Studland and do the coastal walk to Old Harry rocks – huge pillars of chalk at the end of a headland. A group of coastguards was preparing to do a cliff rescue exercise, with abseil ropes and crash helmets. I would not want to launch myself off those cliffs, even with a harness and rope. 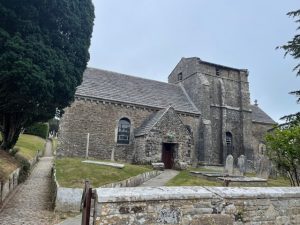 After lunch in the garden at the famous Pig on the Beach (pizzas called rather grandly ‘flatbreads’ – delicious, and a pint of local ale) we walked to Studland church. This is one of the oldest surviving churches in England, almost unchanged since it was modified from its Saxon original form by the Normans in the 11C (around the time Corfe Castle was being built). The tower was never finished (the masons were worried about the soggy, sandy foundations – something that the builders of mansions on Sandbanks don’t seem perturbed by), so the building looks more like a fortress. The windows are mostly tiny and plain glass – no fancy gothic arches, buttresses or stained glass windows (apart from a couple of gaudy Victorian ones). 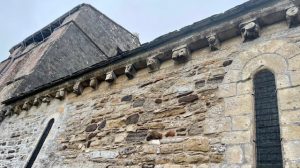 One of its most curious features is the sequence of carved corbels under the eaves of the roof. Many of these would have been familiar to early Saxons and Celts: animal heads and human faces with bulging eyes, looping amorphous creatures. But also some that could only be described as downright rude: naked exhibitionist figures – ithyphallic males and the notorious female sheela na gig. These may well have served as apotropaic figures (to ward off evil; I did a post on this in the early months of this blog – link HERE.) Others believe that they were survivals from the days of pagan fertility deities, or more austere warnings against the sins of the flesh (strange way to do it).

Now, back home, our case numbers of Covid are frighteningly high, the government repeats its ‘don’t worry, we know what we’re doing, let’s get back to normal’ mantras of the past (disastrous) 18 months, and drops all public health restrictions – even as scientists yet again plead for caution, unheeded. A week in Dorset was therapeutic, but its benefits quickly evaporated as we brace ourselves for yet more unnecessary pandemic suffering as a consequence of our leaders’ obduracy: economy, selfish notions of ‘individual liberty’, and free market capitalism taking priority over lives and people’s health and safety.