Earlier this month I posted about Julietta Harvey’s first novel, Familiar Wars, first published in 1987, now reissued with its sequel, One Third of Paradise; both are published by Polar Books on June 25th.

It resumes the story of Eleni, youngest of Gregoris Gregoriou’s three daughters. At the end of Familiar Wars she was about to leave Greece to go to university abroad; her escape was likened to the betrayal of her father by Medea. This novel opens years later with her flying back from England, where she had married an Englishman and had a child, to attend her mother Anastasia’s funeral:

In mid-air…she hovered naked and exposed, lingering over the threshold of home: pulled and pushed by currents of longing and loss.

The author’s style has become richer, more textured than it was 28 years ago: on first reading, those images seem mixed, but on closer inspection they entwine successfully. As the aircraft which transports her home to Greece is buffeted by atmospheric currents, Eleni is herself emotionally turbulent, torn between the conflicting pulls of duty and repulsion; the alliterative plosives in the adjectives tumble in the sinuous syntax, verbally enacting her inner turmoil concisely and with precision.

The central themes reappear: like her father, Eleni has fled her homeland to seek refuge, but she isn’t at home in her life of exile. Back in Greece she rekindles an adulterous, doomed affair.

As she flies back to Greece, she anticipates what awaits her in the family home in Thessaloniki:

The gathered beneficiaries. Her sisters and their husbands appropriating, blaming. She wanted to turn back, before she became entangled yet again in old, disfigured resentments.

That closing metaphor vividly conveys Eleni’s dilemma – she’s being drawn back into the family tragedy that she’d tried to escape; the noun phrase at the end of the quotation turns the abstract concept of her sisters’ resentful greed into a living, corrosive nightmare. And this is partly because Eleni herself acknowledges an impulse to appropriate, while feeling repelled by her family’s dysfunctional selfishness.

Once again the narrative is filtered through the protagonist’s consciousness – this time it’s Eleni’s which dominates, as her father fades away. As in the earlier novel, the sisters I likened to ‘harpies’ last time have become more venomous in their eagerness to acquire what remains of their father’s estate: this section continues with Eleni, a modern Cordelia, her father’s favourite, contemplating the ‘family map’ –

The sisters blindly occupied their allotted territory. Sophia, the eldest, was in control; Kaliopi, in the middle, coaxed, bullied; Eleni herself, late and last, was the expatriate, the pariah. And those responsible for this angry geography were no longer responsible.

These metaphors recur through the narrative. In chapter 21, when Eleni has been trying to persuade her declining father to take the pension he’s entitled to but has so far refused, she endures a bureaucratic scene in the pensions office that is straight out of ‘the world of Kafka, but without the nightmare, of Dickens, without the exuberance’ –

But in her travels within that melancholy geography, through the city of dead ends, the meaning of family became indistinct. She tried to re-draw its clear lines, its natural geometry. Words like father and mother and sisters must have a meaning. They must belong to a natural order and must follow laws of love, loyalty, and obedience; they must dictate duties. But that syntax of feeling, which had once been unquestioned, with her mother’s death lost coherence. What are the duties to the dead, what to the living?

Another time, pulled back into the jealous internecine scheming of her terrifying, overbearing sisters, with their ‘infernal, futile anger’, as they convene to plan their father’s commitment to a ‘home’, Eleni perceives with horror ‘the sight of her sister [Sophia] coiling like a snake, preparing – to suddenly dart her poison’ at their father; but Eleni, along with Kaliopi, is brought together here because of their ‘shared avarice, for money, property, things’ – she’s furtively stashed away for herself their mother’s jewels that her sisters sought:

Eleni stayed apart, but knew she was with them, one of them. She could not compete, but shared this passion of acquisition. It could unite them in love, but only brought war. Perhaps the cause was a common loss. Perhaps their greed was for a more remote, mystical unnamed prey.

That ‘melancholy geography’ has morphed into another kind of awful symmetrical geometry and syntactical, semantic frigidity:

All three of them were caught in a triangle, that stretched its lines and angles to them at whatever distance. But now the remnant of home and family kept them pinned in one place locked in a vicious geometry. Until, when home and family finally went, the three sides might drift apart in peace and forgetfulness. 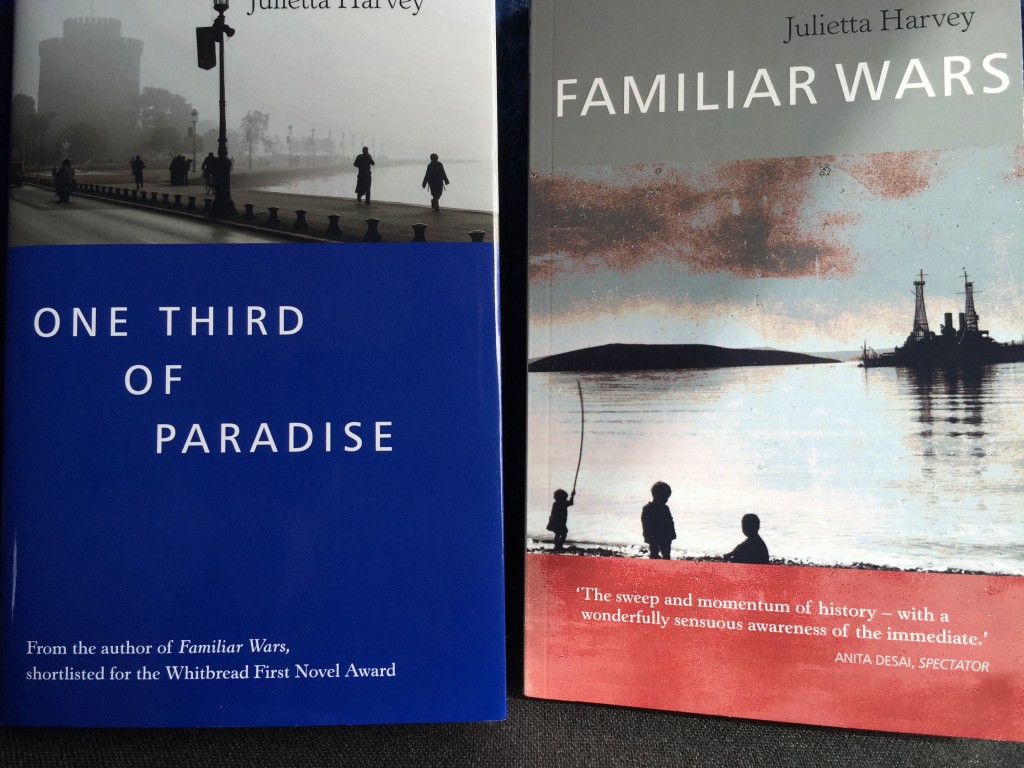 It’s not necessary to have read Familiar Wars to appreciate this novel. We’re given from the start a clear sense of what happened in the past, and how it precipitated the events that take place here in a new domestic war.

The novel goes on to show this tragedy develop as history repeats itself and the themes of love, loss, exile and refugees’ yearning for a home are portrayed in all their bruising, heartbreaking inevitability. The Aristotelian concepts of ‘eros’ and ‘amartia’ are invoked in the narrative early on: they drive the central characters towards their fate and I felt the process with a mixture of pity, fear and revulsion. In other writers this device might seem pretentious, but Greek-born Julietta Harvey is able to enrich our experience of this modern drama with a natural, compelling sense of an ancient tragedy that ‘enacted itself’, narrated in language that’s rich and sensuous, as I hope the extracts I provide here illustrate.

There’s the sad spectacle of the father Gregoris, the eternal survivor of the first novel, descending into powerless senility like a ‘remote brother’ of King Lear, that other ‘old king’, still full of hare-brained, deluded speculative schemes, like the one third portion of the ‘paradise’ island plot he’d bought (the other third was his deceased wife’s)  that he wants Eleni/Cordelia to return to him so that he can develop a luxury hotel on it – without the capital such a venture would need. When he appears to sign the deeds back to Eleni for tax reasons, father and daughter are mutually deceptive, as the symmetrical syntax demonstrates:

He is aware that his daughters (‘dogs’ he calls them at one point; ‘I have no children. May your children do to you as you do to me’) are conspiring to rip him apart for his estate:

It was not fate, it was his own daughters who were killing him.

He’s also like an Ionian Willie Loman, a dying salesman to whom the attention he craves is not being paid, the distrusted, despised (even by his own children) outsider in his own land. When Gregoris’ wife dies her family also revert to type; at the pre-funeral gathering, for example –

He surveyed the relatives with superior indifference, native Macedonians all of them, landowners. Now she was dead, he was a foreigner to them, the travelling merchant, the refugee.

As in all classical tragic figures, he is not a particularly good man, and his misfortune is a consequence of his flawed nature, his frailty of judgement. This is subtly shown in many ways in the narrative, but principally in his cruelty towards his wife and tyrannical treatment of his daughters. In chapter 2 we are reminded how Anastasia was told by her own mother, made spiteful by patriarchal convention:

‘You had better become a good housewife if you want a husband – because you are not beautiful.’

Now that she is dead her daughters ‘grieved for the harshness of those words’; Eleni, the clever one, shares her ‘longing for learning’. But she also recalls Gregoris’ impatience, unpredictable temper and habitual humiliation of his daughters and wife. She remembers how he’d shouted at the teenage Sophia, in a voice that ‘stopped and muffled’ her, because she’d been discovered to have a secret boyfriend,

But what tyranny merited this! Eleni knew, they all knew, the pain he could inflict. Her own mind was bruised by his sudden violence, appearing and vanishing for no reason…

Despite this chilling echo of her mother’s thwarted ambition, evoked in the carefully recycled language, Eleni never fully shares her sisters’ capacity to exact revenge on him: ‘But no father, even a tyrant, merited this. And from a daughter.’

As in Familiar Wars she finds herself assigned the role of the witch Medea, obliged to betray and desert her own father, exiled from him and her homeland. Her fate is beautifully, painfully, but not humourlessly, revealed to us in this intriguing replay of an ancient family drama. It’s less event-filled than Familiar Wars, more brooding, internal and intense – and probably stronger as a consequence.

My preview copy of the novel was kindly provided by the publisher.