I’ve been thinking about Anita Brookner’s fine but disturbing novel Look At Me, which I finished earlier this week, but need to think about it a little longer before posting on it. I’ve moved on to another novel passed on to me by Mrs TD – post forthcoming on that one, too.

In the meantime, here are some more floral images from some recent walks. Flowers and shrubs are really thriving now, even in this unseasonably chilly, damp and windy May. 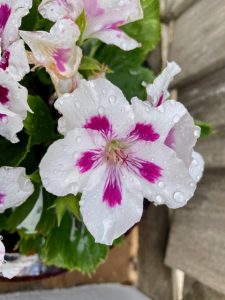 The pelargoniums (or geraniums) in our garden are looking particularly lovely at the moment. This picture was taken just after one of the many showers we’ve had recently.

The etymology of this plant is interesting. ‘Geranium’ derives from the Greek, via Latin, for ‘crane’ (the lanky bird, not the building site machine), while ‘pelargonium’ follows a similar route from the Greek for ‘stork’. This is said, by OED online, to be because the seed pods resemble these birds’ beaks. An early English name for them was ‘cranesbill’. I haven’t checked to see why we use ‘beak’ and ‘bill’ – maybe another time. 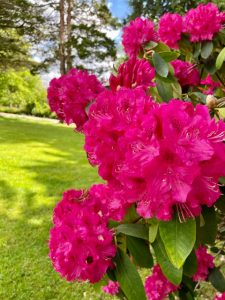 My morning walk today took me through the grounds of Epiphany House, which I’ve posted about before HERE. Here the rhododendrons are also looking their finest.

This name is from the Greek for ‘of, relating to, or resembling a rose…rose-coloured, pink, red.’ The second element is from dendro-, Greek for ‘tree’. I recall using the word ‘dendrologist’ in my previous post about Richard Powers’ novel about trees, The Overstory.

The word in English could originally signify ‘oleander’ (from the 16-18C; aka rose bay); the secondary sense we use now dates from 1657. The origin of ‘oleander’ is uncertain; it comes from French via post-classical Latin ‘lorandrum’, an alteration of ‘rhododendron’, possibly by association with ‘olea’ – olive tree, or from ‘lauriendrum’ – possibly from the word for laurel, as the shape of the leaves was similar. OED includes this citation:

1526    Grete Herball cccxxv. sig. Siv/1   Oleandre or olipantrum is an herbe the leues therof is lyke to laurell but they be longer. 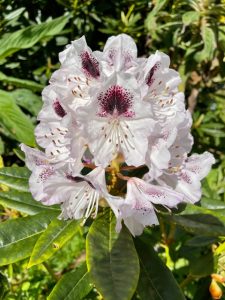 I wasn’t sure if this beautiful shrub in the gardens was a rhododendron, so I checked with my plant identifier app: it’s a Pacific rhododendron, aka California rosebay or big leaf rhododendron. The app says it’s a species of azalea (rhododendron), suggesting the two names are commonly interchanged.

I’m not sure if this is right. ‘Azalea’ derives from the Greek ‘azaleos’ – ‘dry’, because of the sandy soil in which it thrives, or else for its dry, brittle wood.

Both shrubs apparently belong to the botanical family Ericaceae.

You’d think the naming of plants would be more straightforward.

I’m just delighted to see them in my neighbourhood while we’re still confined in our movements by pandemic restrictions. They brighten the day, and lift the spirits.