It’s been a while since my last post – busy with work. So this will be a catch-up on recent things. 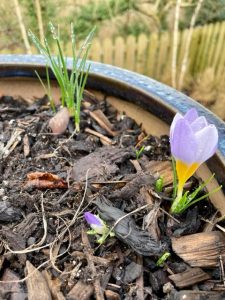 This was the first crocus to appear in a pot in our garden, taken on 28 Jan

Philip K. Dick, The Man in the High Castle. PMC, 2001; first published 1962. I bought this during the presidency of the last incumbent, now just a nightmare memory (or will he return?). It looked for a while like he was going to make this counterfactual story come true. The plot involves a post-WWII America in which the Nazi – Japanese axis powers won the war. The Japanese occupy the ‘Pacific States’ zone, the Germans hold the eastern zone, with a buffer zone in the mid-west.

I’ve read very little sci-fi/fantasy, but I suppose this falls more into the category of speculative fiction – like Len Deighton’s SS GB, or Philip Roth’s The Plot Against America – both of which I found entertaining but not entirely satisfactory. As with most good sci-fi the genre lends itself to some fierce critical insights into the ‘real’ world of our time.

The title refers to a weirdly postmodern novel-within-the novel which tells an alternative counterfactual history of the war: this time the allies defeated the Nazis, but what followed isn’t in line with what ‘really’ happened. I rather liked this head-spinning reflexiveness. The author, rather like the Wizard of Oz, turns out to be much less than his grandiose ‘high castle’ solitude and anonymity would suggest.

I’d seen a couple of episodes of the TV series on Amazon, but gave up on it. It’s similar to but different from the novel, and much less interesting. 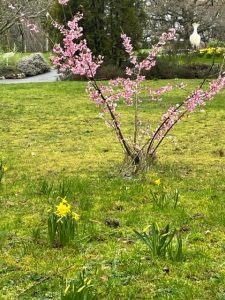 These daffodils and early blossom have appeared in a local park, taken two days ago

Kamila Shamsie, Burnt Shadows. Bloomsbury, 2009. Kamila Shamsie’s 2017 novel Home Fire was one of my favourite books of last year (brief post about it here). This one came even more highly recommended, but I found it slightly less impressive. It still packs a powerful emotional punch.

It begins in Nagasaki, 1945. A young Japanese woman survives the bomb, and the rest of the novel traces her subsequent life. She travels to India, then to Istanbul and post-partition Pakistan. Much of the central plot involves her teenage son’s reckless flirtation with some of the forces of violence in this turbulent part of the world. Oddly enough, given this dramatic subject matter, I found the central part of the novel flagged rather, though it picked up in the last part, and developed a tension almost as unbearable as that in Home Fires. 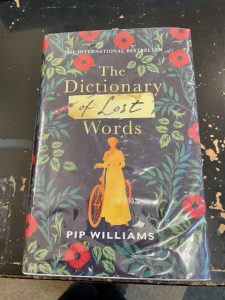 Pip Williams, The Dictionary of Lost Words. I just returned this to the library, so don’t have publication details to hand. It’s similar in some ways to Eley Williams’ The Liar’s Dictionary (brief mention of this one at the same link as above). Both novels involve words that didn’t make it into a major dictionary.

In this one the central character is Esme. As a little girl she likes to hide and play under the table at which the eminent scholar-lexicographers edit the ‘slips’ – small pieces of paper on which the words and entries about them are written and then filed in the pigeon-holes ready for collation and publication in the Oxford English Dictionary. There are colourful depictions of the famous editor, James Murray, his family, and many of those involved in the making of the dictionary, and of the long struggle to get to the end of the project that took nearly fifty years to finish. In a way it never did. It was first mooted in 1857, work began a few years later, and the last fascicle was published in 1928. Supplements and updates have been appearing since. I use the online edition all the time, and have referred to it often in this blog.

The ‘lost words’ collected by Esme begin (significantly, given its meaning) with the slip for ‘bondmaid’, which she finds under the table, dropped by one of the editors. She hides it away in a secret trunk, and over the following years builds up a large collection of her own. This becomes a sort of feminist alternative to the venerable (and patriarchal) OED. Esme’s words are culled from her visits to the covered market in Oxford: the taboo words, slang and vernacular of the women who were denied a place at high table, even if they did eventually get admitted to the universities.

This feminist angle is the strongest part of the novel. It culminates in the grand dinner held in 1928 to celebrate its completion. Several women, including Esme and two of Murray’s daughters, had been key members of the editorial team; many of the public who contributed words and citations – including Esme’s beloved aunt Ditte – were also women. None of them were allowed to attend this august, all-male event. A few were allowed in the gallery to look down at the men eating and drinking.

Not surprisingly the novel includes forays into the suffragist movement, and shows Esme’s awakening to the cause of rights for women – and the working classes who were also excluded from the privileges of the male elite. There’s a rather tedious romantic sub-plot, and some tragedy.

The research intruded too much into the narrative for my taste. The issues, despite their worthiness, dominated the characterisation. I’d have been better off reading a non-fiction account. I’d recommend Simon Winchester’s The Surgeon of Crowthorne (1998), about one of the more unusual contributors to the OED, and The Meaning of Everything (2003) by the same author. 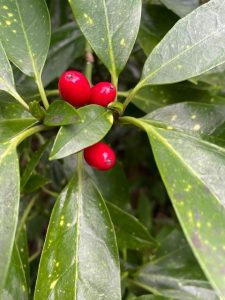 According to my plant identifier app these are Japanese laurel berries. Wonderful colours and texture.

As I write this we’re being battered here in Cornwall by storm Eunice. I had to take down my new bird feeder pole, fearing it would be torn up and become a flying spear. The birds are gathering, confused, in our magnolia tree and keep looking reproachfully and hungrily up at our windows.

I’ll place throughout this post a few pictures taken recently showing the first stirrings of spring in the area.