I’ve now finished the shorter works of Salinger as published by Penguin: I wrote recently about Franny and Zooey (1955; 1957), then about the story collection For Esmé – with Love and Squalor (1953).  In this blog post I shall focus on the first of the two novellas in this slim volume.

Raise High the Roof Beam, Carpenters develops the story of the Glass family, who featured in many of the other stories, with particular focus here on the oldest of the seven brilliantly precocious Glass siblings, Seymour.  As I wrote in my previous Salinger blog posts, Seymour committed suicide in Florida while on holiday with his self-centred wife Muriel in 1948, and his death haunted the family down the years that followed.  This story goes some way to indicating why Seymour ended up shooting himself – but as usual it’s narrated from his brother Buddy’s point of view, and it’s difficult to tell how reliable a narrator he is. 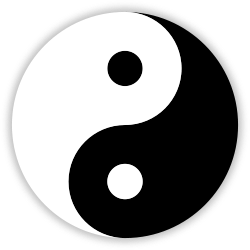 Yin and Yang Taoist symbol: duality of all things in nature

The story opens with a typically mystical-ironic account of the time twenty years before this narrative is set (1955) when Seymour soothed to sleep ten-month-old baby sister Franny, the youngest of the Glass children, by reading her an edifying Taoist parable – which she now claims to remember hearing.  These passages serve to show that the Glass siblings are set apart, different, but also misfits, whose love for and solidarity with each other are what keeps them, just about, sane.

The narrative then jumps to 1942 and Seymour’s wedding day.  Buddy, who narrates both these novellas, as he did most of the other Glass family stories, is in military hospital with pleurisy.  He’s discharged so that he can represent the family at the wedding – the rest of them are unable to attend the ceremony in New York.  The two youngest, Franny and Zooey, are just eight and thirteen years old and living with their parents in Los Angeles; they are still continuing the family tradition of appearing on the long-running radio quiz show called, ‘with typically pungent Coast-to-Coast irony’ It’s a Wise Child.

Seymour was at the time a corporal in the Air Corps.  Buddy receives a letter from his sister Boo Boo urging him to go to the wedding; although she doesn’t directly  mention Seymour’s mental health problems (which ultimately contributed to his decision to shoot himself – an event which is the subject of the story ‘A Perfect Day for Bananafish’ in the collection For Esmé – with Love and Squalor), she hints that he’s unwell, and her premonition is ominous:

Please get there, Buddy.  He weighs about as much as a cat and he has that ecstatic look on his face that you can’t talk to.  Maybe it’s going to be perfectly all right, but I hate 1942.

The novella’s title derives from the quotation from Sappho that Boo Boo had scrawled with soap on the bathroom mirror in the apartment that Seymour shared with her and Buddy when they were in town.  It’s typical of the well-read Glass family, another of the traits that some critics rail at.  Here surely it’s touchingly ironic that this extract is from an epithalamion, and Buddy reads it at the moment when Seymour has failed to appear at the wedding. 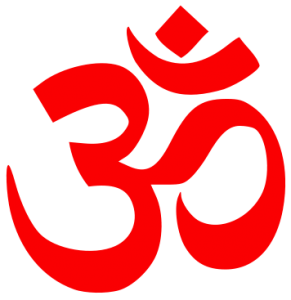 Om symbol as written in Devanagari, the alphabet of Hindi in India, and since the 19C of Sanskrit: it’s a mantra and mystical sound sacred in Dharmic religions

All of the Glass siblings are described as possessing preternatural intelligence, and Seymour and Buddy have instilled in the younger ones a spiritual quality derived from the teachings of Buddhism and oriental religions (as Zooey says in Franny and Zooey).  In her letter, for example, Boo Boo says that Franny recently described to the radio announcer on air how she ‘used to fly around the apartment when she was four and no one was home…He said she surely just dreamt that she was able to fly.  The baby stood her ground like an angel.’

Some critics have found this aspect of the Glass family irksome.  But Salinger always infuses these passages about their unusual character with ambiguous humour, as we saw with the Sappho quotation; there’s also a darker sense that they are outsiders – they often mention that they are ‘freaks’, they don’t fit in with the bourgeois society they inhabit, and can’t conform to what is generally considered normal; this saddens them.   I don’t find them annoyingly hypersensitive, then; they are simply so unusually gifted they find ordinary life almost unbearable.  Especially Seymour, whose nature radiates a kind of damaged spirituality through all the Glass stories.

The wedding is a disaster.  Seymour doesn’t turn up, and Muriel’s family is outraged.  Buddy finds himself sharing a cab with three of her relatives.  The greater part of the novella describes with acerbic humour how Buddy has to listen to their vicious, small-minded demolition of his big brother’s character and sanity, as they pretend not to know who Buddy is.  One of them says of the radio quiz show the Glass children participated in: ‘I loathe precocious children.’  Eventually Buddy snaps back at them with a heated retort.

As usual Seymour is physically absent from the narrative (‘A Perfect Day for Bananafish’ is the only story in which he’s a living presence).  But as usual his spirit permeates the novella, and his words are presented via the extracts that Buddy reads from his diary, which he finds in his apartment.   They are full of his habitual allusions to eastern mysticism, but more tellingly, of his bitter-sweet accounts of Muriel and her family’s behaviour: ‘A terrible and beautiful phenomenon to watch.’  He mentions that her mother thinks he’s ‘schizoid’, and Muriel has told her where he got the scars on his wrists from, ‘poor sweet baby’.  This seems to be a reference to an earlier suicide attempt that hasn’t featured in any of the other stories.  They both think he should see a psychoanalyst.  Seymour accedes to this; he knows Muriel won’t feel ‘close’, ‘familiar’ or, more revealingly, ‘frivolous’ with him if he doesn’t get himself, as he ironically puts it, ‘slightly overhauled’. 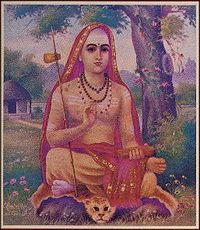 Her mother clearly thinks Seymour is insane; like the rest of the normal world she can’t understand why he’s so detached.  When she asked him once what he intended doing after the war he replied that he’d like to be ‘a dead cat’; she laughed nervously.  He was alluding, he explains in the diary, to a Zen fable.

We see indirectly why Seymour failed to show at the wedding.  He says Muriel doesn’t really love him, and he doesn’t make her happy.  All she wants is to be a conventional housewife and to escape from her mother, who is an ‘irritating, opionated woman’, and Muriel, we feel, is very like her:

A person deprived, for life, of any understanding or taste for the main current of poetry that flows through things, all things.  She might as well be dead, and yet she goes on living…

It’s easy to see why critics find this sort of thing condescending and smug; personally I think it’s just artistic honesty.  Countless writers have portrayed characters recoiling from mediocrity.  Seymour does so with gentle sadness and a sort of passive serenity; I don’t find him smug.

In a later entry, written when he was about to fly to New York for the wedding, Seymour gives a final insight into his conflicted but ecstatic state of mind; he’d spoken to Muriel on the phone:

I really called to ask her, to beg her for the last time to just go off alone with me and get married.  I’m too keyed up to be with people.  I feel as though I’m about to be born.  Sacred, sacred day…I’ve been reading a miscellany of Vedanta all day.  Marriage partners are to serve each other.  Elevate, help, teach, strengthen each other, but above all serve.  Raise their children honourably, lovingly and with detachment.  A child is a guest in the house, to be loved and respected – never possessed, since he belongs to God.  How wonderful, how sane, how beautifully difficult, and therefore true.  The joy of responsibility for the first time in my life.

Here again there’s a beauty in the prose that just about insulates Seymour from the charge of pretentiousness.  He’s more a Myshkin – a holy fool – than a saint.  Nevertheless it’s hard to fathom why he goes ahead and marries the awful Muriel.  Maybe he just tries too hard to see the God in everyone.

There’s much of Salinger’s wonderfully modulated dialogue in this novella; it serves to reveal character with understated precision – there’s hardly any narrative description, yet each character is fully, clearly realised through slight, deft touches.  The long scene in the limousine where Buddy is trapped with Muriel’s venomous, insensitive relatives is dazzling and full of surprising twists: the humour, wit and pathos are sustained in ways that few other writers could manage.

There’s weirdness, too, especially in Seymour’s self-revelatory diary extracts: he says he has received stigmata-like scars on his hands from resting them on the ‘downy pate’ of Franny’s head when she was a baby, and on Franny’s head when he was six or seven.

He goes on to say:

I’m a kind of paranoiac in reverse.  I suspect people of plotting to make me happy.

Once again this is not intended as a serious suggestion that Seymour is Christlike; it’s an indication of his way of explaining his experience with a poet’s licence, in cryptic aphorisms intended to be both mysterious but also revelatory of an ineffable kind of unveiled reality – the hypersensitivity and spirituality mentioned earlier, and which some readers find sententious, uninteresting or ridiculous.

If it is then so are the Upanishads, Tolstoy and The Idiot, which all seem to have had some influence on Salinger’s work.

Next time I’ll write about the second novella, Seymour – An Introduction.