More on the ‘Lives of the Obscure’ in V. Woolf’s The Common Reader, vol.1.

Last time I noted her portraits and analyses not just of the literary greats like Austen and Eliot, but also the vignettes of marginal, forgotten characters, mainly women, whose obscurity seemed to resonate with her poignantly. This is what follows the mention of Miss Biffen:

It is Mrs Dyer who pours out tea for them in Clifford’s Inn. Mr Charles Lamb has just left the room. Mrs Dyer says she married George because his washerwoman cheated him so. What do you think George paid for his shirts, she asks?

These sketches, apparently random and fragmentary, cohere into an impressionistic whole, a galaxy of minor stars. She goes on:

Gently, beautifully, like the clouds of a balmy evening, obscurity once more traverses the sky, an obscurity which is not empty but thick with the star dust of innumerable lives.

More fragments follow, sense impressions, then she notices an ‘enormous wheel’ careering down a Berkshire hill in the 18C. Suddenly the young son of a bricklayer jumps out ‘from within’ and it’s smashed ‘to smithereens’:

This is Edgeworth’s doing – Richard Lovell Edgeworth, we mean, the portentous bore.

This must be one of his crackpot invention/experiments; Woolf doesn’t think it necessary to explain, preferring to let the weirdness speak for itself. Her attention turns to ‘his two volumes of memoirs’ and his extraordinary life:

Byron’s bore, Day’s friend, Maria’s father, the man who almost invented the telegraph, and did, in fact, invent machines for cutting turnips, climbing walls, contracting on narrow bridges…a man meritorious, industrious, advanced, but still, as we investigate his memoirs, mainly a bore.

This Anglo-Irish politician, writer and inventor (1744-1817), is said by Wikipedia to have invented the caterpillar track, among other things, and he was the father of the novelist Maria Edgeworth. He seems to have been an unpleasant character. As Woolf says of this gifted egoist he married four times – two of the wives were sisters Honora and Elizabeth Sneyd (the former a writer and proto-feminist who shared his interest in educational theory) – and fathered with them not 19 (as Woolf says) but 22 children. He and his even more unpleasant friend Thomas Day were prominent members of the Lunar Society (c. 1765-1813), a loose association of scientists, philosophers and artists forming the Midlands Enlightenment; other members included Erasmus Darwin, Joseph Priestley and Josiah Wedgewood, the entrepreneur and ceramicist – see this review in the Guardian of Jenny Uglow’s book, The Lunar Men: the friends who made the future, 1730-1810. London: Faber, 2002. Its name alludes to their practice of meeting for dinner and conversation at each others’ houses on the Sunday nearest the full moon so that they could ride home illuminated by it. 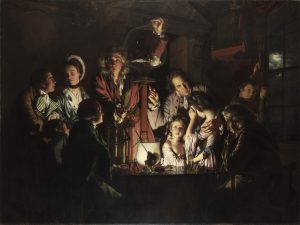 An Experiment on a Bird in an Air Pump, by Joseph Wright of Derby, 1768. It depicts one of the ‘natural philosophy’ experiments with the vacuum device invented by Boyle. Public domain via National Gallery, London/Tate Gallery: Wikimedia Commons

Edgeworth wrote with daughter Maria a tract on education heavily influenced by Rousseau’s theories. He in turn influenced boring Day, who hardly distinguished himself by proposing to Edgeworth’s sister, and to Honora before she married his friend – who had also fallen in love with her while still married to his previous wife. Not surprising they were friends, really.

He attracts Woolf’s attention because of his associations with ‘diffident, shrinking figures who would otherwise be drowned in darkness’. It is through their eyes, she says, that we see him: a tyrant unaware of his own cruelty, bemused that his wife had ‘taken a strong dislike to Mr Day’ – that serial proposer.

Here Woolf acknowledges one of the ‘pitfalls’ of ‘this nocturnal rambling among forgotten worthies’: it’s difficult, she explains, to stick ‘strictly to the facts.’ This is especially true of Day, ‘whose history surpasses the bounds of the credible,’ showing more of the characteristics of fiction. Mrs Edgeworth must, she speculates, have ‘dreaded’ visits from her husband’s friend, ‘with his pompous, melancholy face, marked by the smallpox’, his antisocial manners, his desperation to marry (he’d taught himself to dance in the vain hope of winning the hand of Honora’s sister, later Edgeworth’s wife; as Woolf says, she, ‘of course, refused him’) and his fawning encouragement of Edgeworth’s crazier schemes. Honora’s friend the poet Anna Seward perhaps misguidedly described Day as ‘a sable-haired hero.’

Then we hear of Day’s now notorious scheme to create for himself the perfect wife by adopting two young orphan girls and bringing them up according to some tenets supposedly taken from Rousseau. The more successful girl he’d marry – he named her Sabrina Sidney.

Woolf’s account of how Sabrina failed to pass Day’s exacting tests for a wife is slightly askew. She implies he rushed in a rage after rejection by Elizabeth:

flew into a passion at the sight of her; fired a pistol at her skirts, poured melted sealing-wax over her arms, and boxed her ears.

From what I’ve read these details are accurate, but Day didn’t perform these violent acts out of temper, but as trials calculated to imbue Sabrina with the calm stoicism, fortitude and endurance in the face of the greatest provocation that he felt ideal in his prospective wife. Not surprisingly she disappointed him profoundly when tested so cruelly, by screaming and displaying all of the undesirable flightiness and intemperance, as he saw it, of her sex.

Woolf doesn’t mention that Sabrina, after being cast off by Day, married another man, was widowed, and ended her days as a housekeeper to the family of Fanny Burney’s brother.

She does conclude, with pointed accuracy, what the ‘inconsistent philosopher’ Day’s character really was like:

at once humane and brutal, advanced and hidebound…

This section of Obscure Lives ends with a bizarre scene in which Edgeworth is decribed in a disturbing meeting with an unkempt, ‘mad clergyman’ in an ‘untidy house’ with a garden full of celestial globes. A beautiful young girl brings them tea, ‘a scholar and an artist!’ the clergyman exclaims – but Edgeworth can’t determine if she’s the old man’s daughter, mistress, or what: ‘Who was she?’ And why was the house so filthy, the front door locked? ‘Why was the clergyman apparently a prisoner? Questions began to crowd into Edgeworth’s head…’

‘Something was not right’, he sadly concludes.

The essays in The CR vol. 1 aren’t only essential reading for their discussions of the literary giants, but also for passages of strange charm like this.

I’ve drawn here on Jenny Uglow’s article on Day in the Guardian in 2002. See also the 2013 novel by Wendy Moore, How to Create the Perfect Wife, reviewed in the Guardian that year, which points out ‘Day was a paradoxical character: he became known for his charitable work, giving away much of his fortune to the poor though never giving much thought about Sabrina and her well–being after he abandoned her. He was an adamant abolitionist while at the same time making Sabrina practically his slave’