Shortlisted for the Man Booker in 2018, awarded the Pulitzer Prize 2019.

I didn’t get on with the fragmented structure and (as Lisa Hill described it in a comment), too ‘clever’ style of the subject of my previous post, Colum McCann’s TransAtlantic. The Overstory, by Richard Powers, makes McCann’s novel look like Hemingway. It’s overwritten and, at over 600 pages, way too long. 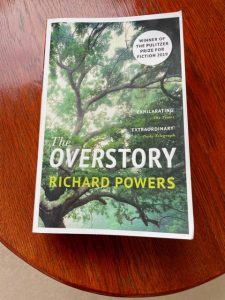 The main problem is that it’s relentlessly evangelical about the amazing lives of trees, and the crazy stupidity of human beings in their systematic destruction of them – to make stuff that’s inconsequential compared to the trees’ magnificence. All this is unconvincingly conveyed through the intertwining stories of eight activists who dedicate themselves to campaigning against humankind’s misguided eradication of the dwindling forests of North America.

It’s a worthy cause, and I learnt a lot about trees’ astonishing capacity to communicate with each other, their super-sensitive root systems whereby there’s no such thing as a solitary tree in a forest: it’s one living entity. Dendrology, environmentalism and the evolution of trees and humans is drummed into the reader on almost every page, to the point where the flimsy plot and increasingly flimsy characterisation are lost in the mix of invective and lecturing.

This is a shame, because Powers – like McCann – can write. There are passages of soaring poetic beauty. It’s just that there are too many of them, and they tend to go on, and on. And they’re repeated constantly.

I won’t linger on the plot. The Overstory is a secular hagiography – like those medieval legendaries which contained dozens of edifying stories of saints’ lives. As in The Golden Legend, there are military saints (Doug is a Vietnam vet) and visionary hermit-ascetics. Each main character is damaged or needy, undergoes an arboreal epiphany/conversion to the cause of saving the trees. Some become martyrs (one of them dies in action; another gets two seventy-year prison sentences at the hands of a judicial system that’s portrayed as being as cruel and bigoted as any pagan Roman emperor sending the Christians to the lions). Others are ‘confessors’: secular saints who are punished or suffer terrible ordeals for their cause (or faith). One central group of activists even become stylites for a year – they live at the top of a giant redwood called Mimas (named after the Greek giant, son of Gaia) in an attempt to save it from the chainsaws.

There have been prominent campaigns like this in the UK, most recently the one in which environmentalists have tried to stop the destruction of ancient forests that stand in the way of train or road construction. This isn’t just an American problem.

The main characters are introduced with richly developed back stories in the opening section, Roots, as a disconnected set of short narratives – and these are the best part of the book. Each protagonist of these stories encounters trees as a crucial learning or development point in their vividly described family histories. They all either plant a tree (or one for each child in the family), or have some sort of life-changing encounter with them.

The second section, Trunk, twines these disparate branches of narrative together. Several characters join forces as eco-warrior activists. Another becomes a psychologist, originally joining these tree-huggers (as the dastardly loggers jeeringly call them) in order to research what makes them such dedicated altruists – and possibly suffering from obsessions or delusions that indicate mental health problems – just as some early saints were thought by their persecutors to have been mad. Gradually he realises he’s guilty of bystander syndrome, and gets dramatically involved.

After a section called Canopy, in which each character’s fate is outlined (most end badly), there’s a final part called Seeds. This is where there’s a small green shoot of hope. A pioneering tree scientist begins a collection of seeds of the world’s most endangered varieties and creates a sort of Noah’s ark for trees (she castigates the original Noah for saving only the animals, not the trees – which she considers more important). She’s convinced the forests are doomed, but there may be a chance of planting replacements some time in the future – when perhaps humanity will have learnt to value trees and recognise their essential role in this planet’s precarious ecology.

There are some other characters, too, but I’d started to lose interest by this point. I can see why this novel was rewarded and praised – its author’s passion is unquestionable, and I feel a bit churlish for being so critical. Maybe it’s another Moby-Dick: adored by many, disliked by more. It shares some of the longueurs and over-detailed intrusive research of Melville’s novel, as well as some of its poetic élan.

Apparently The Overstory is being adapted by Netflix. If the scriptwriters can tap in to its often rousing melodrama, flesh out the sometimes flimsy or stereotyped characterisation and prune most of the unsubtle preaching and relentless earnestness, I can see it making a pretty good film or series.