I’ve tried to write this post several times. How to even begin to discuss a text as dense and as teasing, as multifaceted and astonishing, as Vladimir Nabokov’s Pale Fire, first published in the US in 1962.

Scholars have been poring over this chess puzzle of a text since it was published; I’ll put some links at the end for those who’d like a more profound and challenging account. Much of what’s been published, and I’ve just scratched the surface of a daunting amount of scholarly interpretation and comment, involves exactly who on earth is the ‘only begetter’ of this…novel.

I hesitate to use that word because Pale Fire refuses to conform to most definitions of novel, from Samuel Johnson’s 1755 Dictionary: ‘A small tale, generally of love’ – when the novel was still closer to what tended to be called later Romance – to the OED online:

..A long fictional prose narrative, usually filling one or more volumes and typically representing character and action with some degree of realism and complexity; a book containing such a narrative….

After a Foreword by an American university scholar called Charles Kinbote, in which he explains that his neighbour and alleged ‘very dear friend’, the poet John Shade, was killed on July 21, 1959, just one line short of completing his magnum opus, a 999-line poem in rhyming couplets (he calls them ‘heroic’, but they are too ‘open’ in structure to fit this term, beloved of the Augustans; and Shade shows a heavy debt to Pope in the poem, as Kinbote does in his commentary). It was completed, Kinbote claims, in the last 20 days of Shade’s life.

Already my problem in trying to give an idea of this Russian doll of a novel appears: how to describe it coherently, when it defies coherence itself. 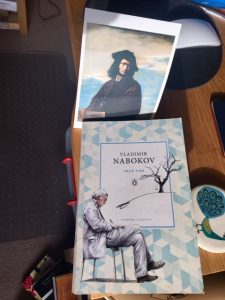 The poem itself follows the Foreword. Its four cantos consist mostly of autobiographical details about Shade, his wife Sybil, and their daughter Hazel, who apparently killed herself at a young age, after experiencing ‘psychokinetic manifestations’ and some kind of mental collapse. There follows a long section in which he questions the notions of existence and ‘le grand néant’.

The largest portion of the text consists of Kinbote’s supposed ‘commentary’ on the poem. He’s stolen the MS (record cards, like the ones Nabokov himself composed on) of the poem and hidden himself away in an obscure American hotel to edit it. It rapidly becomes apparent that this is no ordinary scholarly exegesis or approach – despite his disingenuous claim that these notes ‘will certainly satisfy the most voracious reader’.

Kinbote reveals himself to be increasingly deranged and pompous. If there is a narrative, it’s in this slow self-revelation: he deludes himself that Shade had become an intimate friend, and that he, Kinbote, had told him in the months before he died that he was actually the exiled King Charles the Beloved of his native northern country, Zembla – he’d been arrested by the Shadows, who resemble the secret police of the Soviet regime that Zembla closely resembles. Kinbote insists, however, that its resemblance to any such place is illusory; it’s very name, he explains unconvincingly, means ‘semblance’ (his claim that his name is Zemblan for ‘regicide’ is equally duplicitous). He and his country are shape-shifters. He even uses the word ‘versipel’, which can mean ‘werewolf’ – a creature of dual nature. The commentary lingers on such wordplay, puns, and relishes its own obscure vocabulary and elegantly sinuous but ostentatious prose style.

Kinbote boasts that Shade was intrigued by his stories of his royal exploits in Zembla, and isn’t daunted by the complete absence of any reference to Zemblan material in the poem; instead he sets about a ludicrous, often hilariously outlandish hermeneutically distorted set of pseudo-scholarly notes in which he interprets extracts from the poem as a coded version of his own Zemblan story.

Either that or he just digresses into long rambling reminiscences, full of non sequiturs and dead ends, of his own putative life as King, including his bizarre escape from captivity and arrival in the US. Or riffs on waxwings, cicadas and butterflies, in the register of TS Eliot (sometimes echoing Conan Doyle), Pope, Shakespeare (the poem and novel’s title may come from Timon of Athens, but Kinbote dodges accuracy by claiming not to have any books with him to verify his literary claims). He’s almost pathologically hostile to his fellow scholars, who find him ‘disagreeable’ and ‘insane’ (with reason!), and who he denounces as frauds and fools who envy his intimacy with the great poet and his superior intellect; only he perceives the truth.

To try to give any fuller a picture would require a post almost as long as the novel.

The poem famously begins with one of nature’s ‘pranks’:

I was the shadow of the waxwing slain

By the false azure in the window pane…

The bird had died by flying into a reflection of the world in the poet’s window-glass. The text is full of such ludic language (‘shadow’/Shade; ‘pane’/pain; strictly speaking the bird has ‘slain’ itself unwittingly – the suicide theme is established obliquely at the outset), doublings, deceptions, mirrors and false notions – like Kinbote’s deluded gloss on the poem.

Instead of being Boswell to Shade’s Johnson (the Epigraph is taken from Boswell’s Life of the great man; but who is supposed to have inserted the Epigraph?!), Kinbote reveals himself to be a slightly modified, super-vain version of a Shandean (ie interpreter of Sterne’s vast comic shaggy-dog story), calling himself a ‘Shadean’.

All the reader can do is try to make sense of things, knowing that with Kinbote as guide, claiming as he obfuscates that he’s ‘clearing things up’ authoritatively, we’re unlikely to succeed. That’s where I went wrong at first; once I’d relaxed into glorious failure, the novel took off and took me where it liked.

It was exhilarating and not a little scary. It’s about authors’ lack of…authority. A postmodern labyrinth of paratexts or hypertextual cross-references and metafictional asides, word games, parody, and looping paradoxes, offering impossible solutions to imaginary questions, prolix and dazzlingly allusive. Even the foreword advises how to read the text (preferably using two juxtaposed copies) – in a non-linear, reflexive manner similar to the way today we read e-texts full of hyperlinks. As Shade concludes, near the end of the poem, he understands his existence, or part of it,

And as Kinbote teasingly boasts at one point in his faux commentary: ‘for better or worse, it is the commentator who has the last word.’

As I was about to start this post I came across this by Anthony at his brilliant blog, Times Flow Stemmed: thesis 20 (of 33) published today to mark his blog’s tenth anniversary:

20: Difficulty in fiction is normally pleasurable

Very apt for a reader of Pale Fire. See Frank Kermode on St Mark’s gospel in The Genesis of Secrecy, and Jesus’ disturbingly opaque explanation of why he spoke in parables.

Here are those links to some of the academic studies of the novel:

Brian Boyd on his theory that Kinbote is really another scholar named in passing in the novel, Botkin:

We’re going to see the new Baz Luhrman film ‘The Great Gatsby’ tonight (there’s a Guardian review of its opening screening at Cannes here, so finding myself in Waterstone’s this morning (I believe they’ve dropped the apostrophe, but never mind) I thought I’d buy another copy of the Fitzgerald novel, having lost, lent or mislaid my own some years ago; must be fifteen years or more since I read it, so it’s time for a revisit.  On display was a range of editions: the Penguin Modern Classics edition looked good, with fairly useful notes and a pleasant cover; then I noticed a bright paperback by Alma Classics (who have the uplifting motto on their website ‘clari in tenebris’; they announced on Tues. I think that they’d won the Booksellers Independent Publishers of the year award); they publish some out-of-the-way and non-mainstream literary work and I thought deserved preference, especially as the store had put one of those ‘buy one get one half-price’ stickers on the front – which also has an attractive design and nice old-fashioned folded-in covers (there must be a technical trade name for this: sort of like the dust jacket tuck of a hardback).  This posed a new selection problem: what to buy as a second book?  The contenders narrowed down to three: Paula McClain’s The Paris Wife (a fictional account of Hemingway’s life in 20s Paris with his then wife, Hadley Richardson, and of their crumbling marriage) – there’s an interview with her by Random House here; David Mitchell’s Cloud Atlas, which we saw a couple of weeks ago at the cinema, and quite enjoyed (but too ambitiously long, perhaps); and Ned Beauman’s The Teleportation Accident – review of the hardback edition in the Guardian last year here.  I ruled out the last one because I’m just finishing Javier Marias’s Dance and Dream, vol. 2 of his ‘Your Face Tomorrow’ trilogy, which although compelling and beautifully written is quite a challenge stylistically, structurally and in terms of content, and it moves at a glacial pace; will post more on him another time.  I thought one novel-film hookup was enough, so opted for the McClain, also on the basis that it looks to be a fairly light, not too demanding read – ideal for the long train journey I undertake next week to travel up-country to visit friends and go to see Colm Toibin talk about opera at a King’s College, London symposium on 22 May in their The Joy of Influence symposium (curated by Andrew O’Hagan), one of three such events on the theme of writers discussing other media of artistic inspiration – they all look intriguing: Sarah Hall on painting and Alan Warner on pop; apart from the Johnson-Boswell event noted below, there are others on Marx and one on ‘Literary Identities’.  Pity I shan’t be able to make it to them all.

Finally for today, I’m going to crave your indulgence as I experiment with something new: I’m attempting to embed a tweet about the 250th anniversary of the first meeting (in London) of Dr Johnson and the young Scotsman who became his close friend and biographer, James Boswell.  The TLS article from which it derives (ie the tweet; sorry about the tortuous syntax here – been reading too much Marias) points out, with an illustrative photo of John Sessions in period dress, that those literary heroes at King’s College, London are also behind an event today in their ‘Telling Lives’ series about this literary pair.  So here goes: let’s try to embed this tweet.  Apologies if goes pear-shaped…