A week ago I drove with Mrs TD down to my favourite part of Cornwall, west Penwith, for one of our regular visits to these remote and beautiful moors and coasts. There’s a point on the A30 when the road crests a rise and a couple of miles below you see the magnificent sweep of Mount’s Bay, with the dark turrets of St Michael’s Mount in front, and the graceful crescent of the bay curving round to Penzance and beyond (I’ve posted about this, and St Mary of Egypt, here.) 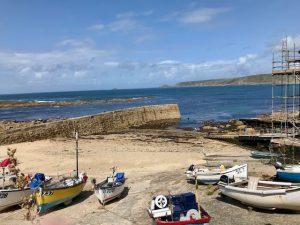 We headed further on this road, past Penzance, to Sennen Cove. We wanted to see again another lovely Cornish bay – not as spectacular as Mount’s Bay, but still lovely. It’s a popular destination for summer holidaymakers, and on a lovely August day the beach was busy with surfers, swimmers and watchful lifeguards (but not, sadly, the famous Newfoundland surf lifesaver dog, whose name I forget; there’s a book about him.) 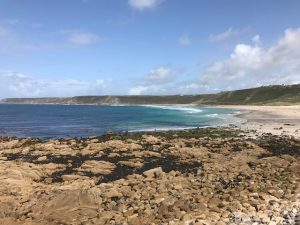 The cliffs loom above the cream-coloured sand of the beach, giving the bay a sense of being protected by a tremendous elemental force: furrowed and fissured black granite.

We wandered through the village, heading for the art gallery: the Capstan and Round House. It’s a wonderful old building, with an ancient capstan wheel in the basement; there’s just room to walk around its perimeter and admire the artworks on the walls and surfaces. 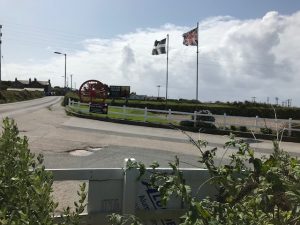 Entrance to the Geevor Mine site

The owner was charming: Colin Caffell (his partner runs the gallery upstairs). He told us about his commission a few years ago to make a memorial statue to Cornish miners. He started with the clay model, then handed it on to the people who specialise in casting. He also told us about the garden in which the statue stands, at the entrance to Geevor Mine, a few miles along the coast road just outside Pendeen, which of course we had to drive on and visit (it’s only been there since 2015, and we’ve somehow never been in before).

This north Cornish coastline is spectacularly beautiful: more rugged and forbidding than the south, just a few miles across the moors of this narrowest part of the peninsula. I’ve posted before about Cape Cornwall, nearby, with its dangerous offshore rocks and iconic community of red-legged, red-billed choughs. Also nearby is the surprisingly large town of St Just, home of the gallery of one of my favourite artists: Kurt Jackson. 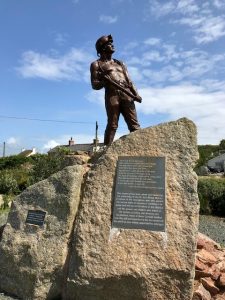 On his website the sculptor Colin explains his intentions: he wanted to position the seven-foot bronze resin statue in a garden containing grasses and plants from all of the continents to which the intrepid Cornish hard rock miners took their skills: the Americas, Australasia, Africa and Asia. The colour scheme he was aiming for, the blues, oranges and reds, were intended to evoke the sunset over the Atlantic. He wanted this garden to become a ‘place for quiet reflection.’ It is.

Of course the plants had to be hardy enough to survive the salty winds blowing off the ocean. He goes on to say that the plants do better than one might expect; the artist Patrick Heron managed to create his own exotic garden where he lived not far along the coast.

The plaque beneath the statue reads:

Who slip between earth’s cracks for a living,

The dark chasm which closes around you,

Into the mine’s gullet, the belly of the beast

Hewn out of granite, the ledger of tin,

The ingot of tradition, a labyrinth of strong voices

That still chisel the dark, the rich seam,

A stream that runs through each generation,

A lode that anchors a man’s life

From ‘The Wheal of Hope’ by James Crowden. 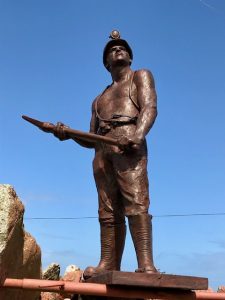 The memorial was ‘raised and funded by the community of the St Just Mining District in honour of the courageous men who worked the narrow lodes in hazardous conditions far below the land and sea in the mines of this district; and the women and children who toiled on the surface crushing and dressing ore. As pioneers, many of these Cornish families took this skill and expertise to the far corners of the world as new mining opportunities emerged.’ [from the same plaque]

That last point is perhaps a little romanticised. The diaspora of Cornish miners – the hard rock specialists who’d learned to extract every kind of valuable mineral from the granite under the moors of west Penwith and the rest of the county (or duchy) – had to emigrate when the mines became less competitive than their counterparts in other ‘far corners of the world.’ They had little choice, in other words.

In 2016 I wrote some posts on the Man Engine (here, and here) the massive mechanical puppet that toured the county and beyond, commemorating these hardy miners – many of whom died or suffered terrible injuries, working in dangerous, unpleasant conditions. The Levant disaster was just one such terrible event. 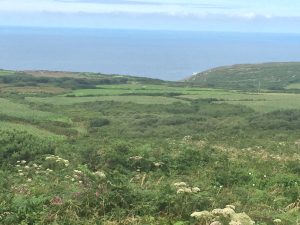 We drove on for lunch at the Tinners Arms, Zennor. I usually aim to have a pint of Tinners Ale here, the inn where DH Lawrence stayed briefly while searching for a place to rent in what he optimistically considered his ‘promised land’. He eventually found the small, basic cottage complex at Higher Tregerthen just outside the village. I’ve posted several times before about his stay in west Cornwall, trying to create a utopian community, Rananim, starting with John Middleton Murry and his wife Katherine Mansfield – but they disappointed him by moving to the ‘softer’ part of the county, to less basic accommodation.

A comment on a related post last August, about the sale of this remote cottage by a local estate agent, elicited a comment today from Julie Warries (thanks, Julie), who said she’s particularly interested in Lawrence’s time in Cornwall and the letters he wrote there. She added a charming aside: when she visited the Tinners Arms she asked a barman for directions to Higher Tregerthen. He didn’t know, but added that she wasn’t the first person to ask that!