Last week I wrote about the first of the two novellas in this book – Raise High the Roof Beam, Carpenters; today I turn to the second, Seymour – an Introduction.

The first novella dealt with the consternation caused in his bride’s small-minded, vindictive family by Seymour’s non-appearance at his wedding in New York in 1942.  The stories were initially met with hostility by reviewers; one said it should have been called Seymour – a Disaster, and is written in a prose ‘so arch and cloying as to be almost impenetrable’ (Steven Marcus in The New York Review of Books, Feb. 1, 1963).

Cover of the edition discussed here, from the Penguin website

Once more the narrator is the second oldest of the Glass siblings, Buddy, a reclusive college lecturer who lives in an isolated rural spot near the Canadian border in upstate New York, and again his subject is the one that haunts the family: the suicide of his older brother Seymour while on holiday with his wife Muriel (they did eventually marry) in 1948.  This event is only described in any detail once by Salinger elsewhere, in his story ‘A Perfect Day for Bananafish’, in his collection of stories For Esmé – with Love and Squalor (1953), which I wrote about here recently.  But Seymour’s mystical presence and subsequent death resonates through all of the stories which deal with the Glass family.

After an enigmatic epigraph which Buddy later claims is by Kafka and Kierkegaard there’s a six-page one-paragraph introduction in which Buddy riffs like a beat poet on…well, I’m not quite sure what, exactly: writing, and the writer’s relationship with his ‘general reader’, who Buddy disconcertingly addresses familiarly and often with the second person pronoun.  It’s not surprising that early reception of the novella was negative – this is the kind of metafictional, post-modern playfulness with which we’ve become accustomed in the past few decades, but which in 1963 would have seemed pretty outlandish.

For example, the syntax is as tortuous as that of the late-period Henry James, but the register is closer to the amphetamine prose of Kerouac’s On the Road; here’s a taste from the second page:

In this entre-nous spirit, then, old confidant [he’s addressing us, his general readers], before we join the others, the grounded everywhere, including, I’m sure, the middle-aged hot-rodders who insist on zooming us to the moon, the Dharma Bums, the makers of cigarette filters for thinking men, the Beat and the Sloppy and the Petulant, the chosen cultists, all the lofty experts who know so well what we should or shouldn’t do with our poor little sex organs, all the bearded, proud, unlettered young men and unskilled guitarists and Zen-killers and incorporated aesthetic Teddy boys who look down their thoroughly unenlightened noses at this splendid planet where (please don’t shut me up) Kilroy, Christ, and Shakespeare all stopped – before we join these others, I privately say to you, old friend (unto you, really, I’m afraid), please accept from me this unpretentious bouquet of very early-blooming parentheses:  (((()))).

This free-flowing, stream-of-consciousness prose also shows traces of Joyce (that sly reference to blooms, perhaps), and perhaps Laurence Sterne (the ludic typography) – though I don’t know if Salinger had read him.  There are even quasi-erudite footnotes that foreshadow David Foster Wallace.

Admittedly it’s not everyone’s cup of literary tea, this kind of thing: it’s not what a Booker judge might call an ‘easy read’.  Personally I think it’s great fun, stimulating and witty.  Pretentious, of course, but that shouldn’t bother us.  Oddly enough I just listened to a Radio 3 podcast (‘Night Waves’) on what Virginia Woolf called the Common Reader; surely the kind of person she had in mind, now represented by the average blog poster or reader, is quite capable of enjoying this kind of thing, and not finding it ‘impenetrable’ or self-indulgent? 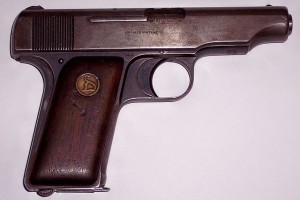 Ontgies semi-automatic pistol: the kind with which Seymour shot himself in ‘Bananafish’

From the seventh page Buddy turns to his theme: the life and death of Seymour.  He was the family guru, a ‘mukta, a ringding enlightened man, a God-knower.’  As his epigraph suggests, he’s trying to set forth the impossibility of encapsulating the truth, the essence of Seymour in one concise story; this evades him, and he finds it impossible, he claims, to write a short story about him.  This will be, instead, ‘a thesaurus of undetached prefatory remarks about him.’  He’s going, in fact, to ‘follow [his] nose’ here.

Given this advice, we shouldn’t, as Mr Marcus did, try to read this as a standard short story or novella.  As Buddy says, it’s a distribution of ‘mementos, amulets’ broken out of his wallet and passed around like ‘snapshots’:

In this mood, I don’t dare go anywhere near the short-story form.  It eats up fat little undetached writers like me whole.

The impressionistic, jazz-riff flow continues like this for over sixty more pages.  It’s disjointed, digressive, it does, as Marcus says, loop and repeat, but so does Bach.  It’s an exhilarating read, original, subversive, weird as anything subsequently done by Beckett, Krasznahorkai or the DFW I mentioned a moment ago.

The picture we get of Seymour is therefore patchy.  He talked a lot, or not at all.  There’s a reference to Raise High the Roof Beam, Carpenters and how Seymour didn’t appear in that novella, and another to the Bananafish story, in which Buddy suggests the character of Seymour resembles Buddy himself, as his family pointed out.  Buddy was also recently returned from the war; like Seymour, he wasn’t himself.  This novella, and the other Glass family chronicles, in other words, are a palimpsest of autobiographies of Seymour, Buddy, and Salinger.  Or a fused biography of all three, narrated by someone who resembles Buddy most out of the three of them.

Seymour left a MS of over 150 poems, all variations of Chinese or Japanese forms of haiku.  The eastern mysticism noted in the other Glass stories is central again in this novella; Seymour’s spirituality, and that of the siblings he influenced, arose from his study of Hindu/Zen scripture (there are references throughout these stories to the likes of ‘the great Vivekananda’, Advaita Vedanta, classical Taoism, and ‘the New and Old Testaments’).

His uselessness at sport is mentioned, but his prowess at a game of marbles is a consequence of a technique like that of the Zen archer – though Buddy insists he was no Zen adept.

There’s no traditional narrative in this novella, then; it’s more the kind of literary essay genre that the likes of the Davids Markson and Shields advocate should replace conventional fiction.  Buddy even calls it, half-seriously, a ‘semi-diary’ form.  There are multiple voices and forms in this novella, such as inserted critical ‘notes’ by Seymour on Buddy’s (or Salinger’s) short stories.

The ending is strange, too.  Buddy just sort of stops:

I’m finished with this.  Or, rather, it’s finished with me.  Fundamentally, my mind has always balked at any kind of ending.  How many stories have I torn up since I was a boy simply because they had what that old Chekhov-baiting noise Somerset Maugham calls a Beginning, a Middle, and an End?

Throughout the narrative Buddy has complained about how tired he is, and now he says it’s time for him to go and teach his class of college girls.  There’s just time for a quick nap and freshen-up.  He admits he’s been egotistical here, sharing what he calls ‘top billing’ with Seymour.  His final koan is reminiscent of the one Zooey told Franny near the end of ‘Franny’: Seymour’s aphorism about the Fat Lady in the theatre audience being ‘Christ Himself’ is what snaps her out of her existential angst.  Here Buddy says that going to teach his group of mediocre girls enlightens him; they are like his sisters, they ‘shine’:

This thought manages to stun me: There’s no place I’d really rather go now than into Room 307.  Seymour once said that all we do our whole lives is go from one little piece of Holy Ground to the next.  Is he never wrong?

When I read The Catcher in the Rye many years ago, and some years later taught it in college to groups of unenthusiastic literature students, I hadn’t thought of Salinger as a particularly experimental or unconventional writer.  Now I’ve finished reading his other works published by Penguin, written about in these recent blog posts, I find him engaging, exciting and constantly surprising.  He even enables me to see my students shining…

Unless stated otherwise, all images are in the public domain via Wikimedia Commons