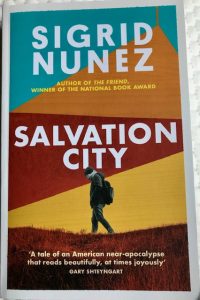 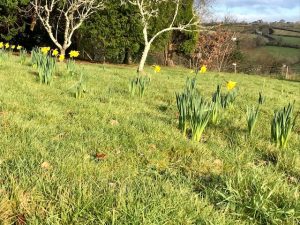 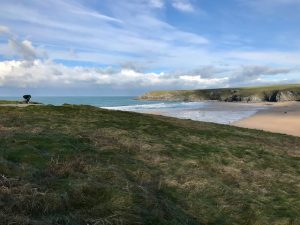 This was going to be a post about Salvation City, the second Sigrid Nunez novel I’ve read recently (I posted on The Friend in September, HERE). I find that my Covid-era lethargy persists, however, and its setting in a near-future flu pandemic also puts me off for now. I’ll return to it another time.

As I returned from my daily walk yesterday I was passing the house and garden at the bottom of my road. There’s a large camellia that forms part of the garden border, hanging over the footpath next to it. This camellia produces beautiful pink flowers every December, and this year is no exception.

As I paused to admire them, one of them dropped off and fell with a soft thud onto the damp pavement at my feet. It looked perfectly healthy: it hadn’t blown or turned brown. I suppose it just gave up on blooming.

What happened next quite disturbed me. I recalled vividly the troublesome scene with the dying pheasants in Hardy’s Tess of the D’Urbervilles.

It takes place when Tess has fled from the sinister, unwanted sexual attentions of Alec, found love with Angel, and then disaster strikes again when, soon after marrying him, he learns about her…dalliance with Alec. In a fit of moral outrage he rejects her and takes off to sulk in Brazil, leaving her penniless and vulnerable to the renewed sexual predation of Alec.

As she wanders the country, trying to figure out how to subsist, she turns aside to spend the night in a tree plantation. She sleeps fitfully in her ‘nest’ of leaves, under the branches, and is often disturbed by ‘strange noises’. She feels ‘wretched’ and that she’s wasted her life: ‘All was, alas, worse than vanity–injustice, punishment, exaction, death.’ She wishes she were dead. (It’s not the most cheerful of novels…) Here’s what follows  – extract from Phase the Fifth: The Woman Pays, ch. 41 (available at The Literature Page website – this is described there as the 1891 text):

In the midst of these whimsical fancies she heard a new strange sound among the leaves. It might be the wind; yet there was scarcely any wind. Sometimes it was a palpitation, sometimes a flutter; sometimes it was a sort of gasp or gurgle. Soon she was certain that the noises came from wild creatures of some kind, the more so when, originating in the boughs overhead, they were followed by the fall of a heavy body upon the ground. Had she been ensconced here under other and more pleasant conditions she would have become alarmed; but, outside humanity, she had at present no fear.

Day at length broke in the sky. When it had been day aloft for some little while it became day in the wood.

Directly the assuring and prosaic light of the world’s active hours had grown strong she crept from under her hillock of leaves, and looked around boldly. Then she perceived what had been going on to disturb her. The plantation wherein she had taken shelter ran down at this spot into a peak, which ended it hitherward, outside the hedge being arable ground. Under the trees several pheasants lay about, their rich plumage dabbled with blood; some were dead, some feebly twitching a wing, some staring up at the sky, some pulsating quickly, some contorted, some stretched out–all of them writhing in agony, except the fortunate ones whose tortures had ended during the night by the inability of nature to bear more.

Tess guessed at once the meaning of this. The birds had been driven down into this corner the day before by some shooting-party; and while those that had dropped dead under the shot, or had died before nightfall, had been searched for and carried off, many badly wounded birds had escaped and hidden themselves away, or risen among the thick boughs, where they had maintained their position till they grew weaker with loss of blood in the night-time, when they had fallen one by one as she had heard them. 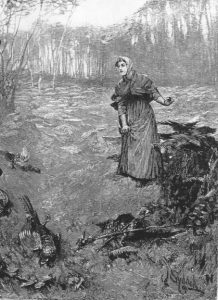 Tess in the plantation

Her response to this gruesome experience is interesting. She pities the maimed and dying birds that survived being shot, and ‘tenderly’ wrings their necks to end their suffering, tears running down her cheeks. The plight of these unfortunate pheasants causes her to snap out of her self-pity: their misery was far more severe than her own:

‘”I be not mangled, and I be not bleeding, and I have two hands to feed and clothe me.”‘ She was ashamed of herself for her gloom of the night, based on nothing more tangible than a sense of condemnation under an arbitrary law of society which had no foundation in Nature.

You can see, I hope, why the fall of the camellia and the flashing into my mind of this melodramatic scene in a novel not noted for its emotional restraint caused me such disturbance. 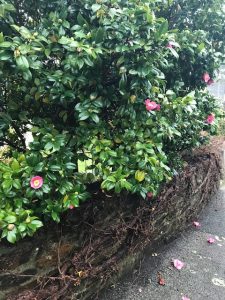 I stopped to take these pictures of the lovely blooms that still flourish on the tree: maybe I should emulate Tess and refrain from gloomy thoughts.

Although Christmas for most of us this year will be different from what we might have hoped, Tess’s response reminds us that nature always has the capacity to restore and renew.

[Illustration of Tess in the plantation is by Joseph Syddall – plate 22 from the monthly serialisation of Tess of the D’Urbervilles by Thomas Hardy. Originally published in monthly parts (with censored text) in the London Graphic magazine, 1891, in three volumes in book form the same year, and in one volume in 1892. Image from The Victorian Web site HERE] 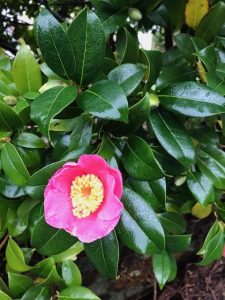