This will have to be a hastily written post – I have a plane to catch.

I just finished reading Elizabeth Hardwick’s 1979 novel, Sleepless Nights, reissued in their usual handsome designs by NYRB classics in 2001, and still in print.

I enjoyed this book in parts, rather like I do a fruit salad with prunes in it (I hate prunes).  There are phrases, clauses, sentences and paragraphs that are beautiful, lyrical, poetic and haunting:

I like to remember the patience of old spinsters, some that looked like sea captains with their clear blue eyes, hair of soft, snowy whiteness, dazzling cheerfulness.  Solitary music teachers, themselves bred on toil, leading the young by way of pain and discipline to their own honorable impasse, teaching in that way the scales of disappointment.

The rhythms, imagery and sounds of that paragraph are delightful.  But I feel a bit like Caliban on his island, hearing these enchanting noises, but unsure if they signify anything, whether they just disarm and waylay.

She’s good on cities: ‘This is New York, with its graves next to its banks.’ Elsewhere, equally good on the inhabitants:

How pleasant the rooms were, how comforting the distresses of New Yorkers, their insomnias filled with words, their patient exegesis of surprising terrors.

This is prose with a capacity to surprise and reward; she constantly yokes unlikely adjectives with nouns (‘the violent perfume’, ‘dangerous salvations’).  But she can also write powerfully lucid, poignant reportage:

A woman’s city, New York.  The bag ladies sit in their rags, hugging their load of rubbish so closely it forms a part of their own bodies.  Head, wrapped in an old piece of flannel, peers out from the rubbish of a spotted melon.  Pitiful, swollen sores drip red next to the bag of tomatoes.

Even here the opening minor sentence (Hardwick is perhaps excessively fond of these) resonates strangely (tough irony) with what follows.  And there’s that strange definite article: why ‘the’ bag of tomatoes?  It makes for a disconcerting precision in the portrait.

As with Renata Adler’s Speedboat, which I posted about here a while ago, this is a fragmentary, plotless novel.  More coherent than Speedboat, Sleepless Nights is nevertheless a collage of loosely connected or disconnected vignettes.  There are sections that build contiguously for a page or two, and we follow a character through those pages, but they then usually disappear, never to return.  There’s a touching section about Billy Holliday. 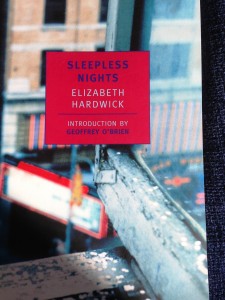 There’s no linear, chronological sequence, and occasionally there’s an interpolated date, as in a diary entry (but cryptic, usually just a year: ‘1950’), but again with no apparent sequence.  There are pieces set out as letters, addressed to characters whose identity remains a mystery.

The narrator is a woman who shares the author’s name, looking back at her life: the ‘parade of people, the shifting background of place’ as the dustjacket blurb has it.  She writes apparently autobiographically about friends and family in New York City, childhood in Kentucky and subsequent visits there, and many other places Hardwick lived in real life, including Canada, Boston, Maine and a year spent in Amsterdam.

We know that Hardwick (1916-2007) had a tempestuous married life between 1949 and 1972 with her serially unfaithful husband Robert Lowell, but whether he is the ‘Michael’, or other men identified in the narrative only by their initials, is unclear.  She does touch intermittently on the themes of marriage, solitude and separation.  As Geoffrey O’Brien says in his Introduction to this edition, however, Hardwick said in an interview at the time of this book’s first publication that much of it is ‘made up’.

I probably need to read this again to do it more justice.  In parts this novel is wonderful, but I frequently found myself having to re-read pages, and still the words failed to abide.  Now I feel in need of a novel with a plot, connected characters and less self-consciously poetic style.  I’m taking Wyndham Lewis’s Tarr on my trip up-country (have to fly: trains to England cut off by storm damage to the rail tracks) – not sure this is a sensible follow-up.