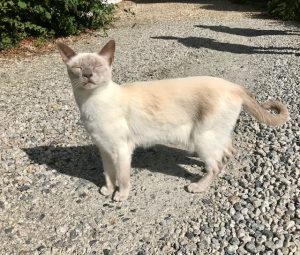 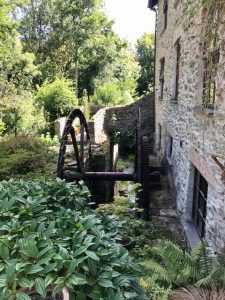 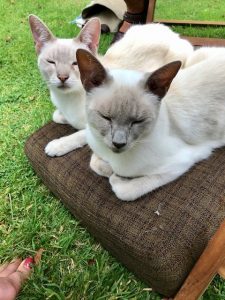 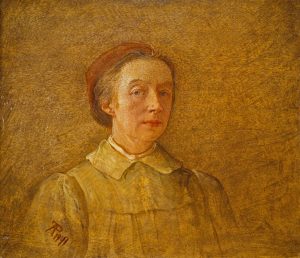 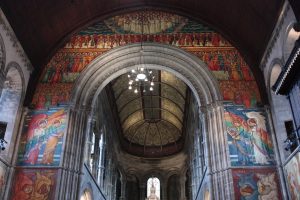 Belinda Bede has loved the pompous, indolent Archdeacon of her local church, Henry Hoccleve, whom she first knew when they were undergraduates, for thirty years. But he married a bishop’s daughter, the spiky and rather scary Agatha. When a new young curate moves into the parish, Belinda’s sister Harriet adopts her customary mode of girlish devotion – ‘she was especially given to cherishing young clergymen’ – despite being, like Belinda, in her mid-fifties.

In ch. 6 Belinda calls on the Hoccleves in the vicarage, ostensibly to see Agatha, but of course this screens her sublimated passion for Henry. 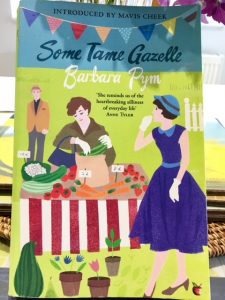 A typical Pym scene has been set up: the good but dowdy woman’s unrequited love for a feckless, selfish man is only dimly perceived or appreciated by him. It’s a scene full of female poignant longing and male preening, treated with a delicious light comic touch by Pym – but there’s Pity and Fear present, ‘like Aristotle’s Poetics’, as Belinda thinks in a different context of a visit by a woman of dubious social status.

She finds Agatha ‘in the drawing-room, mending the Archdeacon’s socks’. It’s a novel in which one of women’s most successful romantic overtures involves making or darning socks – the most intimate scene between Belinda and Henry occurs when his wife is away and Belinda notices one of his socks has a hole; she promptly takes out her needle and darns it, his foot in her lap, her heart racing. He remains, of course, oblivious. Later she wonders if she might dare to up the stakes and knit him a pullover – but decides, like her timorous male counterpart Prufrock, that this would be ‘too dangerous’.

Their conversation turns to the new curate, Edgar Donne (most of the characters are named after the pre-modern English poets – more on that shortly). On hearing Agatha hint that Henry ‘was well, considering everything’, Belinda is bemused.

Considering what? Belinda wondered, and ventured to remark that men were really much more difficult to please than women, who bore their burdens without complaining.

I’ve written now about several of Barbara Pym’s novels (list of links at the end), so shan’t go into detail about this one. It has all her usual preoccupations: spinsters with hopeless passions for even more hopeless men, often ‘high’ clergymen, leading to flirtations and obsessions; sisters or female friends either supporting or undermining each other; village fêtes; references to English poets. (On this last topic I’d recommend the essay by Lotus Snow, ‘Literary Allusions in the Novels’ in Dale Salwak, ed., The Life and Work of BP (1987)).

Some samples of Pym’s delightful comic style: here on p. 1 Belinda says to her sister, after one of Henry’s more portentous sermons, sprinkled with obscure poetic quotations – he’s addicted to showy references to Gray, Young, etc.:

‘Oh, we don’t want that kind of thing here,’ Harriet had said in her downright way, for she had long ago given up all intellectual pursuits, while Belinda, who had been considered the clever one, still retained some smattering of the culture acquired in her college days.

So much is revealed about these two women here; their suppressed longings, discordant views on what would fulfil them; an oversensitive appreciation of what’s right. That emphatic ‘here’ is priceless. Unlike Henry, who parades his literary learning to show off, Belinda – like her counterparts in many other Pym novels – finds ‘solace in the love poems of lesser seventeenth century poets’. And here’s Belinda again:

Belinda, having loved the Archdeacon when she was twenty and not having found anyone to replace him since, had naturally got into the habit of loving him, though with the years her passion had mellowed into a comfortable feeling, more like the cosiness of a winter evening by the fire than the uncertain rapture of a spring morning (p. 11)

Later we’re told much the same about this ‘hopeless passion’; she felt that ‘no spinster of her age and respectability could possibly have such a thing for an archdeacon’:

The fierce flame had died down, but the fire was still glowing brightly [a quotation from Thomas Carew with a similar image follows] How much more one appreciated our great literature if one loved, thought Belinda, especially if the love were unrequited!

Pym has a lot of fun with clothes again, using them as an index of confidence, frivolity or staidness: flamboyant Harriet, for example, appears at one point

Belinda tends to favour unflattering green (which makes her complexion look yellow), or for gardening, galoshes and a raincoat, or sensible shoes, ‘a crêpe de Chine dress and coatee.’ I have no idea what a coatee is, but know for sure that it’s exactly what Belinda would wear. Henry’s chic wife Agatha, on the other hand, looks ‘very elegant in dark red, with a fur coat and wide-brimmed hat’ at a wedding near the end; she’s ‘poised and well-dressed’ – ‘It was Belinda Bede who was the pathetic one’.

If you’ve not read Barbara Pym before I’d suggest this is a good place to start, being her first novel. It’s not as sharp or as tightly written as the later ones, but still highly entertaining. A good companion for the Trollope ‘Chronicles of Barsetshire’ I’m working through; he deals with many of the same themes, but far less succinctly.

‘We really ought to love one another’, thinks Belinda at one point; ‘it was a pity it was often so difficult.’