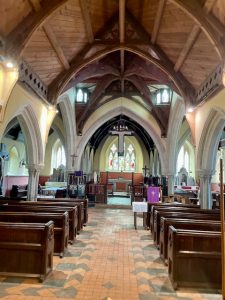 View of the nave looking east towards the altar; the striking crucifix image is by Ernest Procter

In my previous post I described the church of St Hilary, near Penzance, and some of the artworks by the former priest’s wife Annie Walke and her fellow members of the Newlyn School that decorate the interior.

First a word about the saint to whom the church is dedicated, and the painting depicting the dedication. Hilary was born in Poitiers around 315, and became bishop of that city. He was a vigorous opponent of the Arianism that was prevalent in the west at that time, and many of his writings were complex defences of Christian orthodoxy.

In England he gives his name to the ‘Hilary term’ of some of the more pretentious universities, and the courts of law (it begins on or about his feast day – 13 or 14 January). Hilary has been a name for both men and women since the middle ages. There are two other churches in England dedicated to him.

On the south side is a painting of St Hilary saying goodbye and blessing the people of Poitiers on going into exile.

On with the artworks. Many depict the subjects’ sympathy with animals and the natural world, as we saw last time. Not all are signed. They were painted by Alethea and Norman Garstin, Dod and Ernest Procter, Harold Harvey, Annie Walke, Gladys Hynes (whose brother Dr Hugh Hynes wrote the notes on the paintings in the guide leaflet) and Harold Knight. 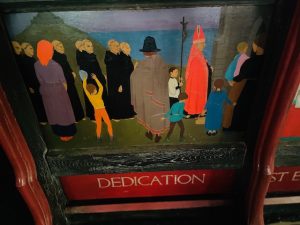 In the chancel on the north side is a picture of the monks of St Michael’s Mount (a short distance off the shore of Marazion, connected at low tide by a causeway) conducting the dedication ceremony. The monastery on the mount is visible in the top left background. As in the panels by Joan Manning-Saunders that I wrote about last time, the colours here are glowing and fresh. I like the way one of the monks processing towards the church glances out at the painting’s viewer, his expression inscrutable. The one at the rear looks a bit like Nosferatu – though I doubt this was the effect the artist was striving for. 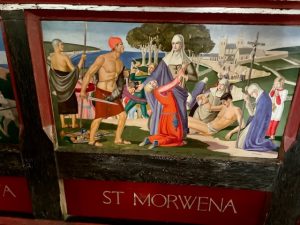 Among the paintings of mostly Cornish saints is a dramatic one of St Morwenna, who gives her name to the town of Morwenstow, the northernmost parish in Cornwall, where she established a hermitage on arrival in Cornwall from Ireland, where she was receiving instruction. Its charismatic vicar from 1843 was Robert Hawker (1803-75), author of the ‘Cornish hymn’,Trelwany. He was an eccentric in his dress and behaviour: he built a hut out of driftwood on the clifftop and spent time there writing his poems and other works. Legend has it that he excommunicated his cat for mousing on a Sunday. He’s also known for his kindness, compassion, and devotion to his parish; he would be one of the first to attend the numerous shipwrecks that occurred at that dangerous stretch of coast, and gave drowned sailors a decent burial in his churchyard, rather than allowing the usual practice of burying them in unmarked graves in the sand on the beach where they were washed up.

Morwenna is thought to have been one of the many children of a Welsh king. One of her sisters is said to have been St Edelienta, whose portrait is also found in the choir, but I don’t include it here. Morwenna is depicted joining her nuns to to rescue travellers being robbed by a bandit called Gwenlock. I’ve been unable to trace the source of this explanation, taken from the church guide leaflet.

St Petroc is reputed to be another son of a Welsh king or chieftain, who also began his training in Ireland. He sailed to Cornwall with other monks, landing in the Camel estuary. Here he established a monastic centre, Petroc-stowe (now Padstow). There are several charming legends concerning his kindness to animals: in this picture he’s shown sheltering a terrified fawn seeking refuge under his cloak from disapproving mounted hunters and their equally disgruntled hounds (there’s a similar legend about St Eustace, among others).

In another legend he removes a splinter from the eye from an unhappy dragon that had sought him out (a variant of the St Jerome legend – possibly calqued on the story of Androcles – in which he removed a thorn from the paw of a fierce lion; in iconography he is often depicted working in his study with the grateful, now domesticated lion snoozing contentedly nearby). His reputation for sympathy with all creatures was obviously well known, even in the draconian community (not the other kind, emulators of harsh Draco, the Athenian lawmaker). 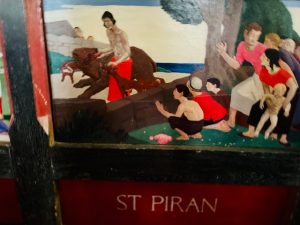 St Piran (or Perran), patron and most popular saint of Cornwall, is shown with more animals: his first converts – a badger, a bear and a fox. I’ve posted about him several times – link HERE.

Little is known about the St Senan, for whom Sennen Cove in west Penwith is named. There’s an Irish 6C abbot by that name, but the 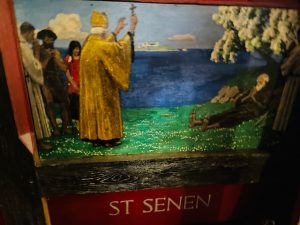 Cornish one seems to be an unknown woman saint. The figure in this picture is clearly a venerable white-bearded man, who according to the guide leaflet had asked, after receiving the last sacrament, to be laid to rest under a blossoming May tree.

St Fingar (Gwinear, Guigner), is patron of Gwinear (near Hayle) seems to have been a 6C Welsh (or Irish) missionary, companion of Meriasek (Meriadoc), subject of the famous Cornish-language 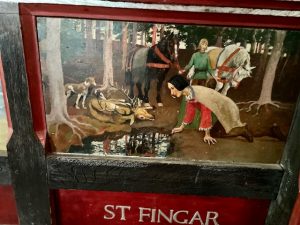 mystery play. On a visit to a prince in Britanny, killed a stag. While washing the blood from his hands in a pool, he looked down at his reflection (like Narcissus) and concluded he looked too good for this kind of thing, so built a hut in the forest and devoted the rest of his life to prayer. In iconography he’s sometimes shown with a stag with a crucifix between its antlers, apparently conflating the legend of Eustace.