Life in Britain, as in the rest of the world, has been depressing and weird this year. After our first holiday break with family since Christmas – in a rented cottage in Devon in the hottest week of the year to date (I posted about it HERE)  – we returned to Cornwall and grey skies most days, and continued social restrictions to mitigate the worst effects of the virus.

A week or so ago Mrs TD said she was fed up with being cooped up, and said we should go for a swim again. In the ocean. I wasn’t too keen – the week before the sea was very cold – but went along with the scheme. 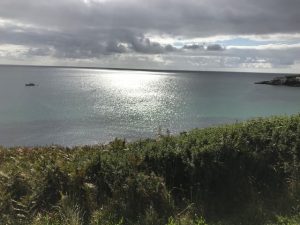 She was right, as she usually is. I should know that by now. We had a lovely walk on the coast of the Roseland peninsula, after a coffee at the Hidden Hut café on the clifftop overlooking the bay. The beach was much less busy than it had been during the high season. A couple had a large dog with a disturbingly deep bark – a Spanish mastiff/labrador cross, they told me when I asked. He looked disappointed as we set off to explore the next bay and beach. 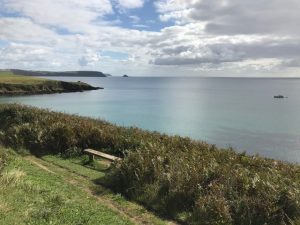 What a good decision. The early cloud lifted and was replaced by summery blue sky and bright sunshine. There was a beautiful beach round the next headland. There were too many rocks on the shoreline for comfortable swimming, so we walked on until we found a delightful little pool – a mini-cove – between two rocky outcrops. The water was wonderful: calm as a lake, and beautifully clear and cool – just enough to be bracing and rejuvenating. 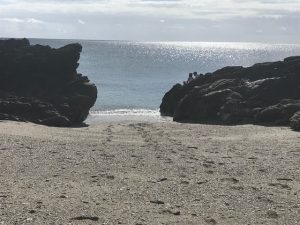 That’s our swimming pool, and those are our footsteps

The beach was deserted, apart from a couple who paused in their walk to perch on the rock overlooking our pool (like the reverse of the folk myth: cormorants turned into humans) and watch us with envy.

It’s probably the best swim we’d ever had. One of the best experiences, too. After the dismay and chaos of this distressing year, it reinvigorated us and restored our sense of harmony with nature, of human equilibrium. It was good, for example, to watch the amazing diving skill of those miniature cormorants, shags. Unfortunate name, but excellent fishers. 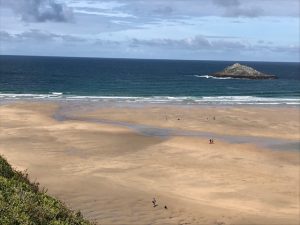 Earlier this week we went to the north coast and one of our default beaches near Newquay. It’s a huge sandy bay with just one coffee truck on the beach during the summer – an old army truck, strangely. None of the frantic seaside kitsch of the more popular spots nearby. Our much-missed dog Bronte loved it there, too, and we scattered her ashes there after she died. We still still her white phantom, racing down the dunes and leaping ecstatically into the waves. She didn’t like swimming, though.

As always on the north coast the surf was pretty fierce – not really good for human or canine swimming. But it was perfect for diving over, into and under the crashing waves – exhilarating. The water was slightly warmer here, too. This day probably topped the previous swimming experience in our private cove.

Back this week to test results from the hospital – pretty good news, considering – and more depressing incompetence and bluster from our out-of-their depth, bragging but useless government. 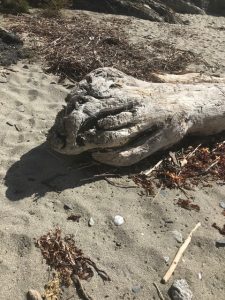 This driftwood log on the beach near our swimming cove looked like the head of a tortoise, I thought

I shan’t linger on that. I prefer to think of the clear sea water and the beauties and delights of this part of the southwest of England.