This is I suppose an autobiography, but it reads like a novel or loosely linked sequence of short stories or vignettes about the growth of a young poet in rural Ireland.

The frontispiece gives this account of the ‘facts’ about him (in this post-truth world that translates as ‘opinions’):

PK was born in Enniskeen, Co. Monaghan in 1904, the son of a cobbler-cum-small farmer. He left school at the age of thirteen, apparently destined to plough the ‘stony-grey soil’ rather than write about it, but ‘I dabbled in verse’, he said, ‘and it became my life.’ He was ‘discovered’ by the Literary Revival veteran AE (George Russell) in 1929 and his poems began to appear in Irish and English journals. In 1936 his first book of verse, Ploughman and Other Poems, was published.

The Green Fool followed in 1938. He published several more volumes of poetry and prose before his death in 1967. 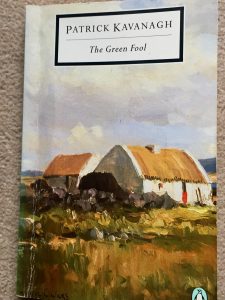 So what does his autobiography add to these bald facts? A great deal. We are given an intimate view of what it was like to be raised in relative poverty, from his infancy in a cradle made from an onion box through childhood learning (badly) his father’s trade as cobbler-farmer, to young adulthood as an aspiring poet.

Each of the 32 short chapters relates a different anecdote, building up a sort of collage portrait of the artist as a young man. Unlike Joyce, Kavanagh is intent on doing so with more wry humour and quirky character sketches than socio-cultural perspectives.

This means the account often veers too close to whimsy. But the warmth and charm of the narrative voice just about prevented me from giving up on it. I liked ch. 6, ‘Pilgrimage’, about Paddy’s first trip to the Lady Well, a sacred pilgrim site for ‘the people of Monaghan and Cavan and Louth. It was one of the many holy wells of Ireland.’ Every year all his neighbours made the journey and returned with bottles of its holy water:

These waters were used in times of sickness whether of human or beast. Some folk went barefoot and many went wearing in their boots the traditional pea or pebble of self-torture.

Kavanagh’s account of the piety of his people is neither patronising nor reverential. This is just the way things were, he suggests – though he maintains a healthy scepticism about the many miracles attested to by the locals – ‘on whatever feeble evidence founded.’

The scene that follows reads like a prose version of Chaucer’s pilgrim tales: some were ‘going on their bare knees’ as in medieval times –

The priests didn’t like this well or these demonstrations of popular piety:

They said it was a pagan well from which the old Fianians drank in the savage heroic days. The peasant folk didn’t mind the priests. They believed that Saint Bridget washed her feet in it, and not Finn MacCoole.

It’s characteristic of Kavanagh’s generous spirit that the chapter ends with the family so ‘fagged out’ when they return home at 4 a.m. that they forget all about the holy water – but the narrator concludes that Our Lady ‘was not displeased’ despite the ‘doubters’ and ‘cynics’ and ‘vulgar sightseers’ among the pilgrims:

She is kind and no doubt she enjoyed the comic twists in the pageant round Lady Well.

There’s the note of whimsy I mentioned. A shame, because this is an entertaining, heart-warming account of the growth of a poet’s mind (without Wordsworth’s transcendental portents) despite the hardships and human foibles to which young Paddy was exposed. His long walk to the hiring fair, looking for a farmer to take him on helps persuade him he’s maybe not cut out for the agricultural life. But his much longer walk to Dublin to seek out his literary heroes is far more disappointing for him.

He learns to plough his own furrow.