Holland House published John Harvey’s most recent novel, Pax, in 2019 (link to my post on it HERE: the artists Rubens and Van Dyck feature prominently, as well as a fictional modern British artist), and decided not much later to publish his backlist of fiction. He should be better known as a novelist, given the quality and range of his output.

There’s an artistic theme also in his excellent 2014 novel The Subject of a Portrait, which deals with the tangled real-life relationships between the Pre-Raphaelite artist Millais, his mentor the art critic John Ruskin, and Ruskin’s young wife Effie. My post on this, with two guest posts, one by the author and the other by the publisher, Michael Flay, are found HERE.

The publishers kindly sent me the three titles I hadn’t posted on previously. First up was his earliest novel, The Plate Shop (1979), set in an ailing English engineering factory. Coup d’Etat (1985) is set in Greece during the brutal military colonels’ junta. You see what I mean about the variety and range of his subject matter.

John Harvey is not a prolific novelist: five novels over a period of four decades. This was probably because of his other career as an eminent academic at Cambridge University, where he specialised in the relationship between visual arts and literature. This interest is reflected in his four non-fiction studies of colour, clothes and illustration (especially in Victorian literature). 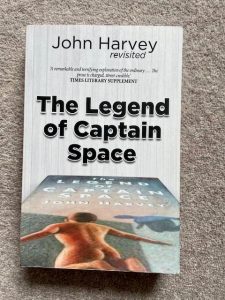 At the heart of The Legend of Captain Space is the portrayal of another troubled married couple. Nick is a handsome long-distance lorry driver who dreams of breaking into the world of motor racing. When his wife Sandy gives birth to a baby boy, Davey, she struggles to bond with him. His father nicknames him Captain Space when the boy is a toddler, and delights in being swung in the air.

This portrayal of the struggles of parenthood is the most interesting aspect of Captain Space. The doting maternal figure is a commonplace in the perception and representation of women in much literature and art; Harvey subverts that image wickedly as Sandy is driven literally to run away from her fractious baby at one point. She’s guiltily jealous of the easy familiarity Nick, a not very attentive father, superficially develops with his difficult son. Her child tends to frighten and appal Sandy.

The marriage not surprisingly hits the rocks. Sandy struggles to find a life for herself without the responsibility of being a mother, and begins to realise that she misses Davey after all. Nick meanwhile bounces slobbishly from casual sexual encounters to drunken pub brawls. Will he be able to fulfil his dream of becoming a racing driver, given his undisciplined nature? Will Sandy learn to love her son?

I have to be honest and admit I didn’t really care that much. I didn’t find these characters very appealing. I daresay that exposes me as a limited reader – but I felt the central characters were too caught up in their sordid, selfish obsessions for much empathy to develop for them.

It’s all handled with Harvey’s customary poise and narrative deftness, but I’m afraid this floundering couple failed to sustain my interest consistently.

But there are plenty of positives. Nick isn’t entirely without humane, softer feelings. When he gets a job on a farm, he’s given the job of driving a combine harvester. When he sees blood on the blades, he gets down to check he finds to his horror that he’s inadvertently ‘scythed a rabbit’. When he continues harvesting the crop,

[he] kept watch. When he saw a patch of brown, he stopped and climbed down. He could walk up close to the animal. It crouched flat, its sides quivered, its feet didn’t move. A shining eye watched him come.

‘There, mate, there. Easy as you go.’ He reached out and touched it, its hair was bristly. He stroked it, amazed.

The style here is characteristic of the rest of the narrative: sparse, unadorned, yet highly evocative and visual (not surprising for an author so sensitive to the visual arts). This passage is typically painterly; it puts me in mind of Dürer’s famous print of a young hare – an impression I suspect John Harvey intended.

I hesitated before posting this, having responded with less enthusiasm than usual to this writer’s work. It doesn’t inhibit me from recommending you try any of his fiction or non-fiction. It’s all alive with humanity and finely observed insights, characters and relationships, the ways in which people portray those lives and connections – to themselves and to others (and sometimes in artistic representations). He’s one of the most gifted and rewarding modern English novelists. I just couldn’t always get on with poor little Davey, Captain Space, and his dysfunctional parents.