I’d thought this was a novel about John Clare and his 90-mile walk home to Northamptonshire in 1841 from what was then known as a lunatic asylum in Epping Forest, on the fringes of London. The main characters in Adam Foulds’s novel, however, are Matthew Allen, the enlightened (for those times) proprietor of High Beach, and his sporadically precocious, often awkward 17-year-old daughter Hannah. The so-called peasant poet’s absconding and trek only feature in the closing pages, and he flits like a troubled phantom as just one (ok, the most prominent) of several distressed and deluded inmates of the asylum who feature throughout the narrative. 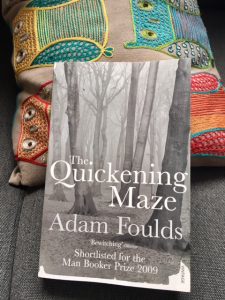 Hannah develops a crush on new neighbour the poet Alfred Tennyson, whose brother suffers from depression, ‘the English malady’ Allen calls it (I’d always thought that was another thing) and becomes another of Allen’s patients. Tennyson inclines that way a little himself after the death of his dear friend Hallam – he was starting to compose the poem about him that would help establish his reputation later. Poor callow Hannah is too inexperienced to recognise she can’t compete with Hallam.

Feeling outshone by her prettier friend Annabella,  Hannah suffers indignities and humiliation in her attempts to make the future poet laureate notice her. These sections are done with remarkable sensitivity, warmth and poignant humour, and demonstrate with insight the tortures and raptures of adolescent love at a time when the quest for a suitable marriage partner was what society deemed the sole and fitting preoccupation of such young women. As Annabella tells her with depressingly worldly shrewdness on hearing of the arrival of the eligible aristocratic brothers from Lincolnshire in their area, “We have to be thinking of these things.”

The insights into Allen’s psychological methods are fascinating. Here he explains his ‘therapy for the insane’ to Tennyson:

“Brightness of company, exercise, a familial atmosphere, an unbosoming of anxieties…”

“Yes, the disclosure of personal fears and unhappinesses. Often I find encouraging patients through a conversational, what shall we call it, memoir is terribly useful.”

The asylum and the experiences of the inmates are portrayed at times with wit and sympathy, but at others there are scenes that are chilling, often stomach-churning (depending on the severity of the patient’s condition). There are two main sites at the asylum: benign Fairmead House, for those well enough to receive the gentler therapy mentioned above, ‘full of gentle disorder, idiocy and convalescence’. Some aren’t even mad at all; they’ve been incarcerated, as so many were in the Victorian era, for reasons of family expediency.

But Leopard Hill Lodge for the more seriously ill, presided over by a brutal and sadistic warder called Stockdale, is described here from the viewpoint of Allen’s young son:

[The Lodge] was full of real madness, of agony, people lost to themselves. They were fierce and unpredictable. They smelled rank. They were obscene. They made sudden noises. Their suffering was bottomless. It was an abyss of contorted humanity, a circle of hell.

Here we see the strengths of Foulds’s prose. Not surprisingly for a writer who’d previously published mostly poetry, it’s highly poetic. There are striking images and lilting cadences. At its best this prose soars.

Unfortunately the ornateness can become cloying. Here’s an example of maybe both qualities simultaneously; Hannah is visiting her friend Annabella, who’s sitting in her garden under a tree:

The tree looked ardent, single-minded, standing there and declaring its flowers straight out of the wet, gnarled wood.

The description is partly to be understood as Hannah’s perspective, with maybe a touch of the sentimental-romantic friend’s, too, while the closing words are surely those of the poet-novelist. ‘Gnarled’ is such a good, twisty word. I’m not sure what ‘declaring its flowers’ is about, though.

The narrative structure is fragmentary, almost collage, which works quite well as a means of depicting the fractured, hallucinatory nature of the minds of the inmates (and the sensibilities of the supposedly sane, including Allen, with his crackpot schemes and tendency to bankrupt himself on them, and the earnest, hopeful Hannah, painfully self-conscious about her unfinished poise, blushes and, well, sweating unbecomingly and at the most embarrassing moments).

Clare’s delusions are particularly poignantly portrayed. At times believing he’s a prize-fighter, he also believes at others that he’s Lord Byron or even Shakespeare. There are some interesting scenes where he consorts with gypsies (he’d spent some of his earlier years with travelling folk, and felt a deep sympathy with their unbridled culture).

It’s an interesting novel, but that poetic style is sometimes intrusive, and so is the rather too evident thorough period research. The ways the plot’s various elements are resolved, however, are startlingly effective, and make some powerful statements about the hypocrisies and delusions of the supposedly sane Victorian ‘maze of life’.