Madame de Treymes is in fact the third of three novellas or long short stories in this handsome VMC edition that I found in a second-hand bookshop recently. There’s a strong theme connecting all four stories: a difficult moral choice that a character makes that can – and does – change not only their own life, but those of others they’re connected with. 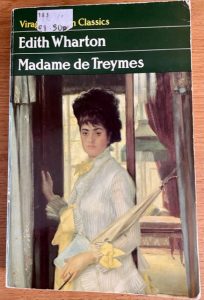 In The Touchstone (1900) a hard-up, not very bright young man needs to find cash quickly if he’s to be able to marry the woman he loves. The only asset he has will require him to sully the reputation of a famous woman novelist who once loved him. Can he sell his soul, by publishing this famous woman’s most intimate letters to him, in order to achieve his romantic dream? And if he does, how does he salve his conscience and explain his guilty caddishness to his new, now enriched, wife?

A similar dilemma faces the young woman protagonist of Sanctuary (1903). She’s unthinkingly content with the prospect of marriage to her wealthy fiancé – a man who’s inherited his family wealth after the untimely death of his profligate elder brother. She’s forced to start taking life seriously and to snap out of her trance of unreflecting complacency when he tells her how his brother besmirched the family honour and they covered it (and hushed it) up. Should she break off the engagement – her first instinct – or take on this morally compromised man and ensure that any child of theirs has her more ethically sound guidance? And if that child grows up in the morally flawed image of his father, how should she deal with him?

The title story, Madame de Treymes (1907) has a very Henry James ambience. A wealthy, somewhat innocent American, John Durham, is in Paris and wants to marry the woman he’s long been in love with since they were friends years ago back home, but he’d lost her when she married a (stereotypically decadent) French aristocrat. She’s now almost free again: her errant husband’s affairs became too obvious and she’s obtained a legal separation. It’s apparent that she regrets this degrading episode in her life, and reciprocates her former friend’s feelings.

But there’s a problem: her aristocratic in-laws are dead against divorce; it’s against their religion (they’re Catholic) and, more importantly, their centuries-old class traditions. If she wants to marry her American she’ll have to give up her eight-year-old son to his corrupt father. Their only hope is for Durham to solicit the aid of the only one of her husband’s relatives who’s ever shown sympathy and affection for her: the Mme de Treymes of the story’s title.

She’s very much in the mould of some of HJ’s more nefariously complicated, morally compromised European women aristocrats in abrasive contact with ingenuous Americans. She seems to offer friendship and a way out of the dilemma, but then changes tack and manipulatively poses an even more horrible dilemma for Durham.

Bunner Sisters (published 1916, written 1896) is different from the other three stories in that it deals with the straitened lives of two women who barely scratch out a living in a shabby part of New York, running a tiny shop that sells tawdry items they’ve made themselves. They live in a tiny room behind the shop. Life is passing them by.

Then a chance encounter brings a man into their lives. Ann Eliza, the older, more staid sister, bought a clock from him as a gift for her sister, and he seems as lonely as the two sisters. They establish a kind of friendship. Self-centred Evelina, the younger, more superficially attractive sister, seems to be the object of his growing affection. Things don’t turn out so neatly, though. This man isn’t all that he seems. Self-sacrifice doesn’t necessarily bring the rewards expected.

As in the other stories, heart-breaking moral dilemmas beset these two helpless, inexperienced women, clinging on to their meagre livelihood by their fingernails, desperate for love and hopelessly vulnerable.

There’s a certain formulaic structure to the stories, and some stock situations and characters (self-sacrifice; moral dilemmas), which perhaps my brief outlines above have indicated. Edith Wharton is always a deeply satisfying author, however, and even with less exalted fiction like this there are rich rewards for the reader.

Here’s an example, chosen at random, of the archly satirical narrative voice that’s so adept at skewering hypocrisy and pomposity. In The Touchstone we’re told about the woman novelist who’d loved the protagonist (Glennard), who went on to betray her by publishing her letters to him.

When they met she had just published her first novel, and Glennard, who afterward had an ambitious man’s impatience of distinguished women, was young enough to be dazzled by the semi-publicity it gave her. It was the kind of book that makes elderly ladies lower their voices and call each other “my dear” when they furtively discuss it…

I found the final story, about the two sisters, the most affecting and original, the most deeply felt.