In my recent post on G. Murnane’s Inland I mentioned that I’d gone on to read Salinger as an antidote to obscure modernist plotless fiction.  This is what I read… 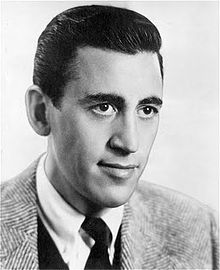 Salinger in 1950, photo by Lotte Jacobi

The short story ‘Franny’ and novella ‘Zooey’ by J.D. Salinger (1919-2010) appeared in the New Yorker in 1955 and 1957 respectively, and were published together in book form in 1961.  The eponymous siblings, both in their twenties, are the youngest of the precocious Glass family, whose members were the subject of many of Salinger’s stories.  The Penguin paperback edition first appeared in the UK in 1964; the original American edition was first published here in 1994, and reissued by Penguin in 2010, and it is this most recent paperback edition which I refer to in this post.

Franny is the eponymous protagonist of the 30-page short story.  She’s a twenty-year-old New Yorker student of English who meets her boyfriend,  Lane Coutell – another student, but as pompous as Franny is clever.   He affects an air of lofty insouciance, pretending to have taken little notice of her gushing love-letter he’d been reading when her train pulled in.  As they drive away in a cab she realises she doesn’t feel any real affection for him.

He takes her to a fashionable restaurant famed for its French cuisine; there he smugly indulges an ‘almost palpable sense of well-being’ at finding himself ‘in the right place with an unimpeachably right-looking girl – a girl who was not only extraordinarily pretty, but, so much the better, not too categorically cashmere sweater and flannel skirt’.  Salinger here slips partly into the idiom of the priggish, privileged young bore, in the modernist narrative style, with its blend of omniscient narrative voice and interior monologue.

When he brags about his intellectual precocity, Franny accuses him of talking ‘like a section man’ – usually a graduate student whose conceit is matched only by his capacity for ‘ruining things for people’.  She sees Lane is irritated, but can’t stop speaking her mind.  She apologises for what he calls this ‘bug’ she’s suffering from, and says she just can’t snap out of her ‘destructive’ mood.

He eats voraciously, smoking prodigious numbers of cigarettes, but Franny doesn’t touch her sandwich and sips her glass of milk.  Unimpressed by his boasting about an essay he’s written,  she becomes increasingly distressed with what she considers his phoniness and that of everyone else associated with academic life (this is a theme familiar from Salinger’s hugely successful first novel, published in 1951, The Catcher in the Rye).  She’s even contemplating dropping out of her university English course: ‘It’s all the most incredible farce’, she says.  ‘Brilliant’, Lane responds with chilling sarcasm; ‘That’s really brilliant.’

Later she lets slip that she’s also dropped out of the Theatre Department and given up performing in dramatic productions.  Lane is incredulous.  ‘All those egos running around feeling terribly charitable and warm’, she explains.  Salinger’s dialogue, with the italicised, emphasised syllables, catches the tones of the speakers with precision and wit: Lane’s inanity and pretensions are acerbically revealed through his modishly academic jargon mixed with swaggering slang and swearing, while Franny’s exasperation is pitch perfect .  Despite its serious moral and spiritual themes, this story is extremely funny.  Salinger himself had become an adherent of Ramakrishna’s Advaita Vedanta Hinduism in the early 1950s, and both ‘Franny’ and ‘Zooey’ reflect this spirituality; he later flirted with numerous other mystical or alternative sects and belief systems.

The argument escalates as Franny fails to make Lane understand the nature of her ennui and dissatisfaction with the insincerity and mediocrity she sees in academic and literary types.  ‘I wish to God I could meet somebody I could respect’, she says.  Our narrator slyly refrains from telling us how the increasingly despondent young man responds to this.

Feeling unwell, she visits the ladies’ room and cries bitterly.  Lane is now thoroughly annoyed at the ‘goddam peculiar start’ to a day he’d anticipated as turning out more gratifyingly.  His veneer of charm disappears, and he’s revealed in all his unattractive nastiness and vacuity.  When she returns she complains that everyone in their social circle is ‘just so tiny and meaningless and – sad-making…I’m sick of everybody that wants to get somewhere,  do something distinguished and all, be somebody interesting.  It’s disgusting – it is, it is.’

He questions her about the book she’s carrying.  The Way of a Pilgrim, she tells him, is

the story of a Russian peasant who seeks enlightenment on the significance of Paul’s words in Thessalonians about praying ‘without ceasing’.  He wanders throughout the land with a knapsack containing just bread and salt[1].  A mystic  ‘starets’, a kind of guru-monk, teaches him the power of uttering  ‘the Jesus Prayer’ without ceasing, a heartfelt prayer that has to be internalised for its efficacy to be experienced: ‘Lord Jesus Christ, Son of God, have mercy on me’.  In the manner of a Zen koan or the eremitic-ascetic tradition of hesychasm (stillness, quietude), it becomes like a heartbeat, and you get to ‘see God’, she believes.  Lane is cynical about such ‘mumbo-jumbo’, and scoffs that it could result in ‘heart trouble’.  Franny is evidently hurt by his attitude, seeing the effect of repeating the names of God as similar to that of the mantras of Eastern religions like Buddhism and Hinduism.

[1] First published in Kazan in 1884 but probably written several decades earlier; the Russian title translates fully as ‘Candid Narratives of a Pilgrim to his Spiritual Father’.

Lane is more interested in going to a party and ‘Yale game’, but when Franny faints, probably because she’s starving herself, he’s initially attentive, but spoils the effect by hinting at a sexual assignation later.  We’re left in the closing lines with her alone:

…quite still, looking at the ceiling.  Her lips began to move, forming soundless words, and they continued to move.

The story shows Franny rejecting the competitive egotism of the superficial material world in favour of a more mystical, religious experience (she cites The Cloud of Unknowing in positive terms) – she’s on the brink of starting an inner journey in quest of enlightenment herself, like the Pilgrim.  She wants to stop competing: ‘I’m sick of not having the courage to be an absolute nobody.’  She craves the kind of annihilation of ego that mystics and anchorites seek, although she never quite articulates this fully. Lane is portrayed as typifying the crassness of secular self-interest which repels her.

Salinger is famous for his reclusiveness – he lived in near-isolation in Cornish, New Hampshire for almost fifty years, alienated from the world, avoiding interviews, litigiously preventing biographical and other works about him.  Salinger, an unconventional ‘biography’ by David Shields and Shane Salerno, was published this year to accompany a documentary film about him.  It adopts the collage approach advocated in Shields’s 2010 book Reality Hunger,  with its scattering of unacknowledged quotations profusely through the text.   The authors attempt to pierce the many myths about him, asserting for example that his tetchy seclusion was a consequence of PTSD brought on by his wartime experiences; they dwell upon his predilection for very young or much younger women, linking it with his central themes of innocence and nostalgia.  Most reviewers (like this one in the New York Times) have found some of the authors’ dramatic claims unconvincing.  Shields and Salerno also assert that up to ten previously unpublished works of Salinger’s are planned for release within the next few years.

In the second part of this post I shall turn my attention to  ‘Zooey’ and the negative critical reception which greeted the two stories, and how it’s now possible to see Franny and Zooey as the work of a master – albeit one whose character seems now to have had a decidedly unsavoury side.