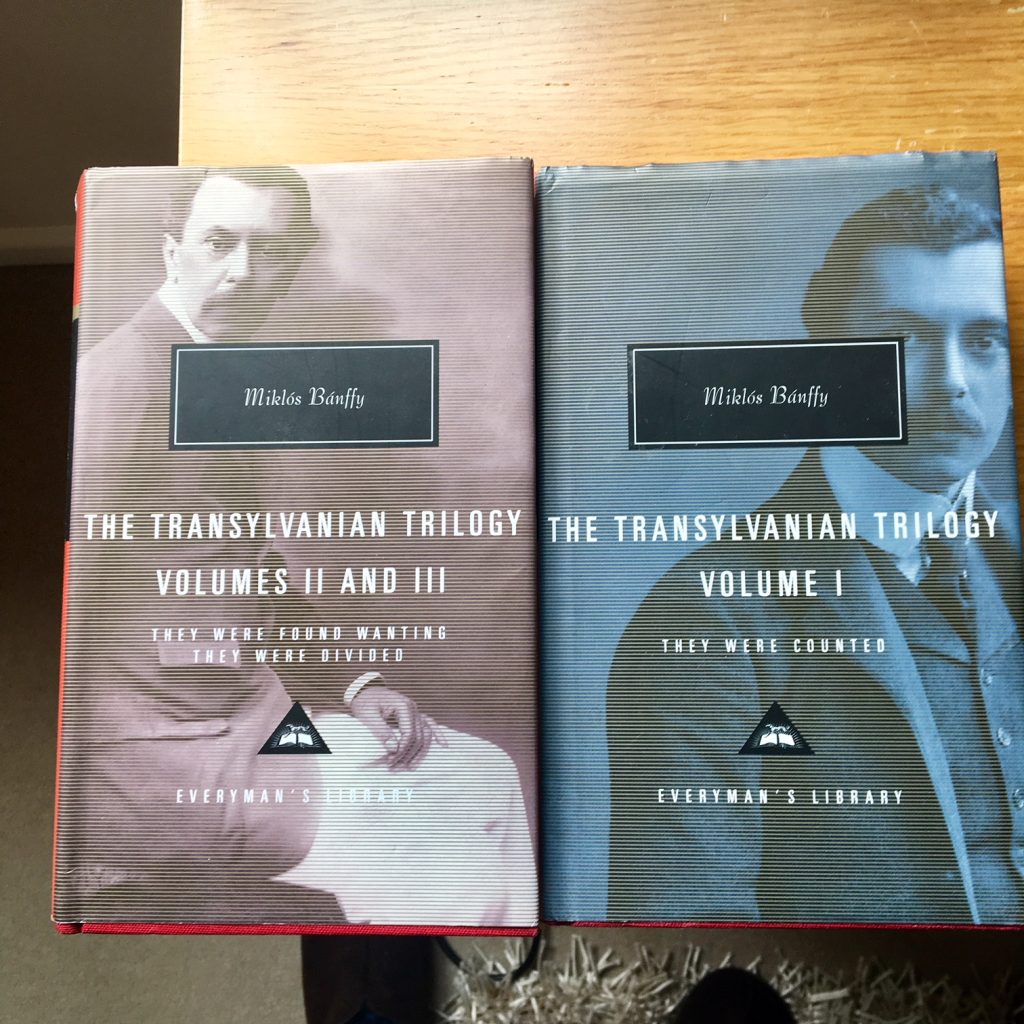 Last December I enjoyed a post by Emma at Book Around the Corner on vol. 1 of the Transylvanian Trilogy by Miklós Bánffy. I commented that I’d had the Everyman two-volume English translation on my shelves for some time and must get round to reading it. Why not do a readalong? she challenged. Fellow blogger Meredith at Dolce Belleza was also tempted, but in the end we both had to duck out because of other commitments.

I did press ahead with reading the trilogy, however.

It fills some 1500 pages so it’s impossible to boil down all my thoughts about this great work in a short post. I’ll begin, then, with an introductory piece to provide some literary and historical-political context. For the action of the novels begins in 1904 with numerous tumultuous scenes in the Budapest parliament alternating with more frequent scenes at sumptuous balls, hunting parties and salons, and ends as the young men set off cheerfully for a war in Europe in 1914 which they believe with heartbreaking optimism and romantic naiveté will be over by Christmas.

The novels are set against the labyrinthine complexity of politics in the Austro-Hungarian Habsburg Empire and the Balkans in their dying days leading up to the disaster of WWI, ‘when European civilization committed suicide’, as the eminent historian Hugh Thomas puts it in his informative introduction to my edition. As a consequence there’s a bitterly elegiac tone to the trilogy.

Bánffy came from one of the ancient Hungarian aristocratic families that had ruled Hungary for a thousand years. His wealth derived from the family’s vast forest estates in Transylvania (the trilogy’s protagonist, Bálint Abady, spends much of his time, when not engaged in romantic pursuits or parliamentary debates, trying to modernise his badly-run family forest estates).  That troubled province was handed over to the new state of Romania at the Treaty of Trianon in 1920. Like parts of lowland northern Europe, this was a region at the crossroads of clashing ethnic and other groups, which as a result was a site of fierce conflict for centuries.

Today we know Transylvania best, perhaps, through the sensational-melodramatic Gothic novel of 1897 by the Irish hack writer and theatre impresario Bram Stoker, who somehow created one of the most significant works of fiction and character archetypes of the modern European age, given that he was a second-rate writer. His half-digested library research into the folklore surrounding Transylvanian Count Vlad the Impaler was conflated with the high camp Gothic-horror stories about vampires that Byron’s physician Polidori had revived in 1816 when Mary Shelley produced the first draft of Frankenstein as her contribution to that famous ghost story competition with which they wiled away the long dark days and nights of the ‘year without a summer’ by Lake Geneva (see my posts on this recently). Stoker’s Dracula has coloured our view of Transylvania ever since as a dark, exotic land of wolf-haunted forests, sinister castles and long-nailed, hissing undead predatory Counts with harems of sexy bloodsucking brides.

Bánffy’s trilogy has no time for this entertainingly lurid stuff. His is the world of ballroom gossip, aristocratic adultery and political intrigue, factional plotting and treachery. As foreign minister for Hungary from 1921-22 he was involved in the attempts by his countrymen to mitigate the punitive land divisions that ensued from the post-war convention at Trianon to carve up the empire that had been lost after the catastrophic war and defeat of the Germans in 1918. He succeeded in leading Hungary into the League of Nations in 1922, but was denounced by Right-wing nationalist Hungarians who saw him as having sold them out to Yugoslavia. He then lived to see the rise of Fascism and invasion of his homeland by the Nazis, followed by the Russians who ousted and replaced them with an almost equally repressive Communist regime. When he died in 1950 he was living in exile from his ruined home near Cluj-Napoca. 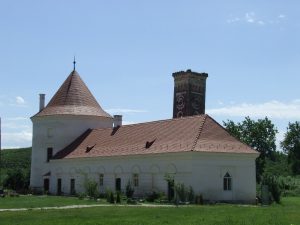 Bonczhida Castle, ancestral home of the Bánffy family, devastated during WWII and now undergoing restoration. Image in the public domain via Wikimedia Commons

He’d been brought up to hope and believe that his beloved country would one day break free from the Austro-Hungarian Empire and resume its independence as a monarchy, restoring its status before the catastrophic defeat to the Turks at Mohács in 1526. Much of the tragedy of the political element of the trilogy results from that naive and romantic dream which blinded Hungarian politicians to the otherwise  obvious signs of the approaching disaster of 1914.

Most of the characters in the trilogy have very long race memories, and still wrangle bitterly about ancient battles and ensuing humiliations, while oblivious of nearing disaster. In Vol. 2, for example, Count Antal Szent-Gyorgyi will only invite guests to his famous shooting parties if they fulfil his decidedly choosy criteria. Not only did he rule out ‘bad shots’ and the ‘bad-mannered’; he also excluded anyone with ‘decided political opinions’ for he ‘loathed politics – and politicians’. With his ‘rich knowledge of history and genealogies’ he would also rule out anyone ‘if he thought their ancestry ignoble or unworthy’, considering princes and near-royalty as less estimable than ‘some simple country nobleman whose ancestors had been ‘nice people’ since time immemorial’:

For Count Antal, anyone who was able to trace his descent from the days of the Arpad kings…took precedence over all others.

People of Czech extraction were also excluded, possibly because his ancestors’ lands had been overrun by ‘the army of Giskra’, or else because of his hatred of the pan-Slav movement – which meant pro-Russian and therefore anti-Habsburg. His loyalties were even more eccentrically refined; he barred anyone who had any connection to ‘the Heir, the Archduke Franz-Ferdinand’, for his allegiance was to ‘the old Emperor, and the Heir’s supporters were clearly anxiously awaiting the Emperor’s demise, showing themselves ‘greedy, unacceptable opportunists’.

This brief background gives some indication of the strengths and weaknesses of the trilogy. It’s an immensely ambitious, highly addictive and readable attempt to set a tragic romantic drama against the even more tragic backdrop of the most momentous upheaval in world history since the days of Napoleon. This places it in the company of similarly wide-ranging and portentous epics like War and Peace, and, in a different way, Proust’s A la Recherche…

But the very complexity of Balkan/Austro-Hungarian history and politics often slows down the narrative and causes the reader to long for an index of characters. I drew up my own in the end. And those Hungarian and Transylvanian names are so polysyllabic and tongue-twistingly multi-consonantal, they don’t reside memorably in this ageing reader’s memory. I had constantly to resort to my notebook summary of each chapter, as minor characters reappeared in a more important role some hundreds of pages since their last appearance. And every one of the huge aristocratic cast of characters seems to be related to everyone else.

Next time, maybe in more than one post, I’ll take a look at the plot and try to set it in the context I’ve started sketching here.

Vol. 1 has a detailed introduction (as mentioned above) by the historian Hugh Thomas, a genealogical family tree of the Bánffy dynasty, a chronology of historical and family events, and both volumes contain maps of the Austro-Hungarian Empire in 1913 and of Transylvania.