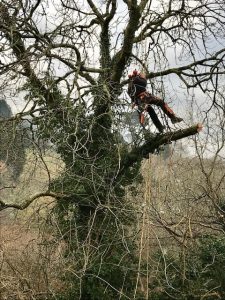 Three men arrived the other day to carry out tree surgery on two trees beside our garden. As I watched the man climb a ladder then attach himself with harness, clips and his ropes and abseil up, down and round a tall ash, then a lime tree, chainsaw bombinating (a word I just encountered in the Introduction to an Anthony Trollope novel, and had to look up; I’m determined to start using it!), I felt a mixture of trepidation and exhilaration. He was so high up, so precarious.

And I half recalled a poem from my youth about someone looking at a man up a telephone pole, with a shocking last line. I tried Twitter, to see if anyone could name the poem or author. No success.

Then someone suggested I try the National Poetry Library. I sent an email, and after a few days had a reply from Lorraine, asking if I could recall any lines or phrases. A few days later I got a positive response. She’d found it! [Update, 13 Dec: she’s emailed to say it was her colleague Russell who found it, so thanks, Russell!]

It’s not a poem. It’s a very short story by the New Zealand writer Janet Frame. It’s called ‘The Linesman.’ I found a copy online HERE:

Three men arrived yesterday with their van and equipment to repair the telephone lines leading to the house opposite. Two of the men stayed at work in the house. The third carried his ladder and set it up against the telegraph pole twenty-five yards from the house. He climbed the ladder and beyond it to the top of the pole where, with his feet resting on the iron rungs which are embedded at intervals in the sides of the pole, he began his work, his hands being made free after he had adjusted his safety harness. He was not likely to fall. I did not see him climb the pole. I looked from my window and saw him already working, twisting, arranging wires, screwing, unscrewing, leaning back from the pole, dependent upon his safety belt, trusting in it, seeming in a position of comfort and security.

I stared at him. I was reluctant to leave the window because I was so intent upon watching the linesman at work, and because I wanted to see him descend from the pole when his work was finished.

People in the houses near the telegraph pole had drawn their curtains; they did not wish to be spied upon. He was in an excellent position for spying, with a clear view into the front rooms of half a dozen houses.

The clouds, curds and whey, were churned from south to north across the sky. It was one of the first Sundays of spring. Washing was blowing on the clotheslines in back gardens; youths were lying in attitudes of surrender beneath the dismantled bellies of scooters; women were sweeping the Saturday night refuse from their share of the pavement. Perhaps it was time for me to have something to eat – a cup of coffee a biscuit, anything to occupy the ever marauding despair.

But still I could not leave my position at the window. I stared at the linesman until I had to screw up my eyes to avoid the bright stabs of spring light. I watched the work, the snipping, twisting, joining, screwing, unscrewing of bolts. And all the time I was afraid to leave the window. I kept my eyes fixed upon the linesman slung in his safety harness at the top of the telegraph pole.

You see, I was hoping that he might fall. 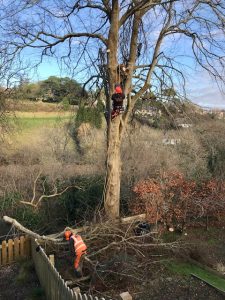 It was that last line that I’d remembered. We’ve all surely had that strange mix of impulses when standing on a high place like a cliff or mountain: excitement at the panorama, and an urge to jump. So it was with the tree surgeon – or the linesman: how skilful and fearless they were. Precarious. ‘He was not likely to fall.’ Confident that his was a position of ‘comfort and security.’ She wanted, she believes initially, to see him come down safely.

Maybe Janet Frame was also creating an extended metaphor for her own experience. The dangerous, precarious act of creating as an artist. Exposing yourself to the gaze of others, while increasing your own capacity for observing the lives of others (all those verbs of ‘staring’, ‘spying’). The awareness of the possibility of success or catastrophic failure; the mix of artistry and sheer physical hard work (the vocabulary of ‘snipping, twisting, joining, screwing, unscrewing’). 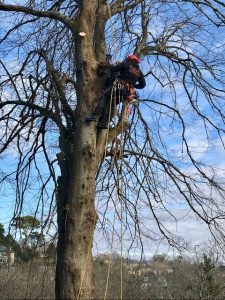 Maybe as well she’s alluding to the horrors of electricity (the linesman is ‘arranging wires’): she endured countless procedures of ECT, and I believe narrowly avoided a leucotomy, as primitive ‘treatment’ for her mental health problems as a young woman (that ‘ever marauding despair’ felt by the narrator).

There’s a sense in this story that the woman is both detached from the linesman, observing him, but projecting herself into him: she becomes him.

I’m pleased to say our tree surgeon safely completed his task and left intact with his two mates. The squirrel whose nest was exposed by the removal of lime tree boughs was less happy. Serves him right for eating all my bird food.

My thanks to Lorraine and the National Poetry Library for their detective work.