Last time I wrote about the gorgeous mosaics in the basilica San Clemente that we visited during our short break in Rome recently. Today I’d like to say a few things about some of the other outstanding places we saw. 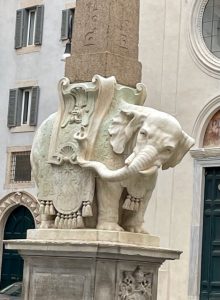 I particularly liked the Bernini elephant near the even more spectacular Pantheon. Revealed to the public in 1667 in the Piazza della Minerva, the animal bears on its back one of thirteen huge Egyptian obelisks dotted around the city’s squares. This one was probably brought to Rome in the first century for a temple to Isis located here. It dates from c.580 BC. He has an admirably long, curling trunk, and a slightly worried expression. Probably the effort of holding up such a heavy load.

We walked across the Tiber – which was criss-crossed by swooping swallows feasting on insects just above the surface of the water (still haven’t seen any in Cornwall) – to Vatican City and the impressive avenue leading up to St Peter’s. Visitors were told to wear FFP2 face masks. A young woman ahead of us had passed through bag checks but then been turned back by the next level of security. She was asking people if they had a spare mask. She was so distraught we took pity on her and found a spare in our rucksack. It was worth it for the beatific smile she gave us.

Inside the basilica was jaw-dropping. It’s the largest structure I recall being in – including the massive hangar where Concorde was built in Filton (I’ve mentioned my student vacation job there before). It’s not necessary to relate what’s to be seen there. It starts with Michelangelo’s Pietà just inside the main doors – then the wonders continue.

I was expecting a rather more ostentatious, opulent interior, having seen so many Baroque churches in our wanderings in Rome, but St Peter’s is relatively restrained, even austere in comparison. It’s still sumptuous, of course, but my expectations of distasteful excess were not fulfilled. It was a genuinely spiritual experience. We even joined a service of mass. Mrs TD was raised a Catholic, so was thrilled to take communion in such a place. We didn’t understand too much of the sermon, but I gathered it was about good and evil, and renouncing the devil. Not surprisingly. We watched the film The Two Popes on Netflix when we got back: made a lot more sense having experienced the place for ourselves. 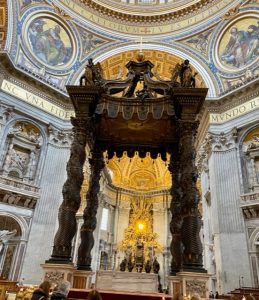 I would single out for special mention the enormous baldacchino over the high altar under the basilica’s dome. Completed by Bernini (again) in 1634, it’s twenty-six metres high – as high as many palazzi in Rome. Rather like the more portable palanquins, these structures would originally have been tent-like cloth canopies; this more grandiose, architectural example is made of bronze. The name derives from ‘Baghdad’, because the cloth used in early versions of these canopies originally came from there. 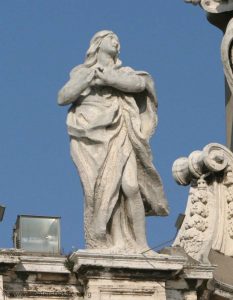 Regular visitors to TDays will know of my interest in hagiography, and in the legend of St Mary of Egypt in particular. Rome has several representations of this penitent ascetic saint, and even a temple that was once a church dedicated to her. Time didn’t permit a visit to all of these, and I stupidly neglected to research properly where to locate the statue of her among the 140 figures perched on top of the grandiose portico-terrace curving round the square in front of the basilica. Hers is one of a group of 24 in the north colonnade , and they’re so high up it’s hard to identify them from ground level. So now I’m home I’ve returned to the online image (link HERE) and can pick it out properly from the dozens of others – next time I’ll know exactly where to find her and can take my own pictures.

There were so many other places in Rome that I could enthuse about, but I think I’ll leave it there. I’d single out for passing mention the moody Caravaggios in the church of San Luigi dei Francesi near where we were staying by the Piazza Navona, and another in the neighbouring San Agostino church.

I could write a whole post just on the Piazza Navona itself. One of its three beautiful fountains – the Fontana dei Quattro Fiumi (1651) – depicts symbolically four great rivers: the Nile, Danube, Ganges and Plate. Bernini crops up again here: he designed it, and did one of the carvings. Legend has it that the figures facing his arch-rival Borromini’s church façade opposite are shielding their eyes from its horrors!

This is the church Sant’Agnese in Agone. As a former student of hagiography I’m thrilled to think that the relics of this saint, martyred when she was just thirteen, are enshrined here – on the site where the martyrdom took place.

So many places to return to or see next time. The Keats-Shelley museum by the Spanish Steps was closed, but it was good (and sobering) to see its exterior and think of poor Keats wasting away inside. The Trevi Fountain was thronged with tourists, but still breathtaking. As for the Colosseum – those Romans were brilliant architects and engineers. We’ll go inside next time.