My eye seems no worse after the recent laser surgery , so I’m able to post some brief updates again. 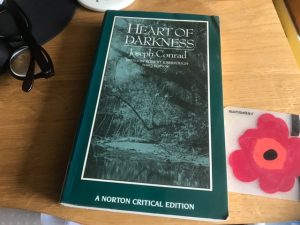 Joseph Conrad, Heart of Darkness. Norton Critical Edition, ed. Robert Kimbaugh. 3rd edition, 1988. First published 1899. Each time I reread this novella I’m more puzzled by it. It’s been interpreted in such varying, often conflicting ways, as the essays at the end of the Norton edition show. From Achebe’s scorching criticism of Conrad’s possibly unconscious racism and endorsement of white European supremacy, to the Marxist, Freudian, symbolic and other approaches, it defies a single, unitary approach. As the introduction by CB Cox to my old Dent’s Collected edition has it, ‘there is no key which will unlock the secret meaning’ [of HofD].

The narrative-within-a-narrative by Marlow famously describes his storytelling method – he eschews the ‘direct simplicity’ of the usual ‘yarns of seamen’:

…to him the meaning of an episode was not inside like a kernel but outside, enveloping the tale which brought it out only as a glow brings out a haze…

Is Kurtz a monster and a devil, a madman who believes himself a deity who has succumbed to ‘the fascination of the abomination’?  Or the ‘universal genius’ that his acolytes worship (like the bizarre Russian ‘harlequin’ – therein lies perhaps another line of political interpretation)? Kurtz’s notorious postscript to his report to the sinister “International Society for the Suppression of Savage Customs” highlights the generally held view that there is a distressing element of racism in the story: ‘Exterminate all the brutes’ is pretty unequivocal. Or is Kurtz, as some claim, referring there to the brutal European ‘pilgrim’ colonisers, greedily extracting the ivory and other precious treasures the ‘dark continent’ provides them? The imagery of darkness, fog, haze, etc., constantly elides and obscures the narrator’s perspective, and the reader’s.

It was after reading this disturbing novella that I turned to the Multatuli, mentioned in my previous post, for its very different, very clear attack on colonial exploitation by the rapacious Europeans. 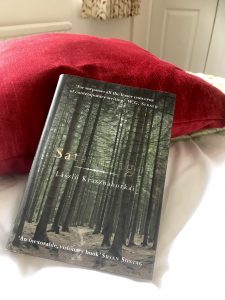 László Krasznahorkai, Sátántangó. Tuskar Rock, 2012. Translated (brilliantly) by George Szirtes. First published in Hungarian 1985. Another slippery, elusive narrative. The epigraph from Kafka sets the tone of this surreal, nightmarish fable-fantasy. It also has the dark, sardonic (gallows) humour of Beckett – and a couple of enigmatic, sinister-clown central characters who wouldn’t seem out of place in Waiting for Godot.

In ‘mercilessly long autumn rains’, lashed by winds, a desolate rural community that resembles the corporate, pointless bleakness of a communist-era Hungary collective farm languishes and rots, neglected, despairing. The ‘stinking yellow sea of mud’ deepens, the roads turn to rivers. The scheming, avaricious inhabitants gather in the dingy bar. There they drown their sorrows and sins, flirt and bicker. Until that strange pair arrives: Irimiás and Petrina, thought to have died but now restored to life: resurrection men. The villagers’ hopes rise: they will provide salvation from their ‘years of “wretched misery”, break the damp silence’. They will lead them in an escape to a better, more fulfilling life. Except, unsurprisingly in this topsy-turvy world, nothing works out as expected. Maybe this returning pair are treacherous spies, tricksters or devilish emissaries. Definitely not the Messiah.

Written in long, loping sentences, each chapter is one unbroken paragraph. Part One is numbered I-VI, Part Two, VI-I. The effect is mesmerising, constantly surprising, subverting the superficial familiarity of the drab scene. That mirror structure, like tango moves, provides a hypnotic, dance-like feel.

Is the novel an allegory about storytelling, fabulising ‘reality’? The drunken village doctor spies on his neighbours, making notes that become this narrative. And it’s a dystopian account of an absurd world that outdoes reality in its weirdness, temporal fluidity and defiance of rational thought, with the illusion of ‘Resurrection’ and perhaps redemption as tantalisingly elusive as a phantom tango dance partner.

It’s a fascinating, absorbing work. It was filmed in 1994 by Béla Tarr (seven hours long and, appropriately, in black and white). 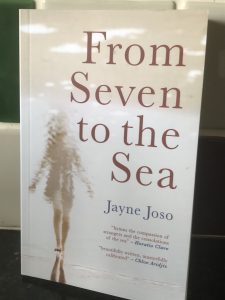 Jayne Joso, From Seven to the Sea. Seren Books (an imprint of Poetry Wales Press), 2019. Some while ago I posted on this writer’s Soothing Music for Stray Cats. This one is very different, and better.

On her seventh birthday Esther is taken by her not particularly attentive mother to live in a seaside town (somewhere in Wales, it seems) with her new father – a grumpy control freak who clearly hates kids. The classic ogre stepfather. The imaginative child can’t settle in her new school, where it’s debatable who’s nastier: the pupils or the teacher. Sensibly she takes to skipping classes to visit her new friend Pete, a kind, grizzled old seadog she encounters in the harbour. She loves going out to sea with him in his boat. He’s the father she craves.

Various mishaps (some dogs have a hard time) darken spirited little Esther’s world, but it’s a touching fairytale where it’s evident that things will work out ok for her. The sea will always be there to cradle her.