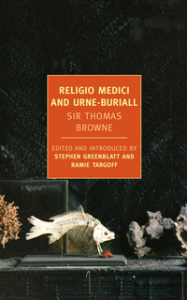 In their detailed and entertaining Introduction the editors describe the ‘idiosyncratic and often surprising ways of thinking’ of Sir Thomas Browne. Coleridge praised him for his ‘brain with a twist’. The eclectic and somewhat eccentric list of topics covered in his works includes a study of the quincunx in gardening, and an encyclopaedic exploration and refutation of ‘credulity and supinity’ and ‘false opinions’ (the Pseudodoxia Epedemica, or Enquiry into Very Many Received Tenents and Commonly Presumed Truths, first published in 1646, and subsequently much revised and augmented): here he considers such beliefs as ‘Glasse is poyson’ (in a chapter on Minerals and ‘vegetable bodies’); ‘Of the pissing of Toads, of the stone in their head, and of the generation of Frogs’ (in a marvellous chapter on animals, which includes the notion ‘That all Animals in the land are in their kinde in the Sea’, which I cited in a recent post on Marvell’s poem ‘The Garden’), or that children, without instruction, would naturally grow up speaking Hebrew.

Born in London in 1605 and educated at Oxford and then in the field of medicine in Italy, France and Holland, he was a typically polymathic, Baconian enquirer into all phenomena and esoterica in the natural and metaphysical worlds. His erudition was profound and extensive, but untrammeled by the scientific methods of his contemporaries: he was, as the editors put it so admirably, a ‘connoisseur of uncertainty’ who ‘delighted in circuitous methods and ambiguous conclusions’.

He settled in Norwich to practise medicine in 1637 and lived there until his death in 1682.

Like Shakespeare he was an aficionado of neologisms: the OED ranks him at no. 70 of the most prolifically cited sources (above Shelley, George Eliot and Ruskin [about whom I posted several times recently ]), and in the list of sources responsible for the first evidence of a word he ranks among the great, at an impressive no. 25, with 788, including the nouns ‘electricity’, ‘hallucination’ and ‘suicide’, and adjectives such as ‘medical’, ‘ferocious’ and ‘ascetic’. He was particularly fond of Latinate vocabulary, so for example snails are not ‘boneless’, they are exosseous; he writes not of birds’ flight but of their volitation; earwigs aren’t wingless but impennious; there’s a highly entertaining article on his contribution to English vocabulary on the Oxford Words blog here. 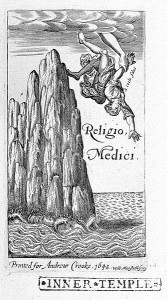 The title of his first published work, Religio Medici, is intentionally paradoxical and controversial. It alludes to a contemporary proverb that two out of three doctors are atheists and sceptics, as the opening sentence shows:

For my religion, though there be severall circumstances that might perswade the world I have none at all, as the generall scandal of my profession, the naturall course of my studies, the indifferency of my behaviour, and discourse in matters of Religion, neither violently defending one, nor with the common ardour of contention opposing another; yet in despight hereof I dare, without usurpation, assume the honourable stile of a Christian…

Here he’s also referring to his medical education at three famously free-thinking European universities, where the pursuit of science was demarcated from the usual theological approach, and where the practice of anatomical dissection, which was considered a blasphemous transgression in other institutions, was an essential part of the curriculum. In this same sentence he alludes also to his refusal to be caught up in the doctrinal disputes that had grown increasingly virulent in the 1620s and 1630s, and which were threatening to ‘tear England apart’, and led to the Civil War of 1642-51 (Greenblatt and Targoff). His unorthodox examination of his religious faith in the light of his medical profession proved highly controversial, and like many Protestant works it was (in 1645, three years after its first unauthorised publication, to which Browne responded by bringing out an expurgated edition a year later) placed on the Vatican’s Index expurgartorius – the notorious Index of prohibited books.

Browne’s self-exposure in the Religio was unusual but not unprecedented: Montaigne’s Essays, first published in 1580 (and translated into English by John Florio in 1603) were a similar attempt to explore the questing motions of its author’s mind, and of his learning and beliefs.

Like Montaigne, Browne is addicted to digressions in his labyrinthine pursuit of his mind’s movements, and the text lacks discernible method. As you will have seen in my quotation of his opening sentence, his style is ornate, eloquent and sonorous, full of literary and theological allusions, subordinate clauses and rhetorical flourishes, with parallelisms and mellifluous symmetries; it also has an elegance, ruggedness and verbosity that verges on the obscure and pedantic. His writings were gruffly praised by Samuel Johnson, and admired by the Romantics. More recently WG Sebald wrote with fascination (in The Rings of Saturn, first published in German in 1995 and in English in 1998) about Browne’s ‘Musaeum Clausum or Bibliotheca Abscondita’ –  a playfully imaginative catalogue of his imaginary collection of rarities ‘never seen by any man now living’ (it’s discussed in my blog post here).

The craze for such cabinets of curiosities and wonders in the seventeenth century became the basis for some of the great scientific museums that were founded about this time, like the Ashmolean in Oxford, or the collection of Sir Hans Sloane, parts of which were bequeathed to the nation and formed the heart of the British Museum. But unlike the rational spirit of classification and organisation that underpinned these Baconian enterprises, Browne’s was a mind that delighted in paradox and contradiction, and occult mysteries, and he wasn’t averse to the dangerous voicing of doubts about accepted religious tenets and implausible Bible stories. He sums up his thinking as being dominated by ‘an unhappy curiosity’.

Hydriotaphia, or Urne-Buriall, first published in 1658, was Browne’s prose meditation on the discovery in a field near the village of Great Walsingham in Norfolk of between forty and fifty urns containing human ashes, bone fragments and funerary objects. He reflects upon the different funeral practices of people from earlier cultures, and how they thought about the afterlife. He mistakenly believed the urns contained the remains of Romanised Britons; subsequent scholarship has shown they were probably Anglo-Saxon, dating from around the year 500. But he was far more disposed to link them with the sophisticated Romans, and not the pagan savages (as he saw them) of their successors in Britain’s history. 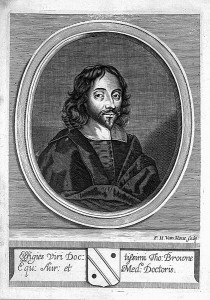 Portrait after a miniature by FH van Hove, now in the Wellcome Trust, via Wikimedia Commons

He speculates on the practice of funerary cremation, but is effectively conducting a ‘diagnosis of the human condition’ – principally our hopes and fears about the afterlife:

To be gnaw’d out of our graves, to have our sculls made drinking-bowls, and our bones turned into Pipes, to delight and sport our Enemies, are Tragicall abominations, escaped in burning Burials./Urnall enterrments, and burnt Reliques lye not in fear of worms, or to be an heritage for Serpents.

In a typically elegant but uncharacteristically emotional section he ponders the apparent evidence that some of the urns contained the remains of more than one person, which leads him to consider the origins of the impulse for couples to indulge in the practice of joint burial:

The ashes of Domitian were mingled with those of Julia, of Achilles with those of Patroclus: All Urnes contained not single Ashes; Without confused burnings they affectionately compounded their bones; passionately endeavouring to continue their living Unions. And when distance of death denied such conjunctions, unsatisfied affections conceived some satisfaction to be neighbours in the grave, to lye Urne by Urne, and touch but in their names.

He ultimately finds little consolation, however, in this desire to find solace in the hope that death is not the end of life; ‘Vain ashes’, he concludes, ‘which in the oblivion of names, persons, times, and sexes, have found unto themselves a fruitless continuation, and only arise unto late posterity, as Emblemes of mortall vanities.’ Earthly commemoration is as futile as the hope for posthumous life – but we can’t help pursuing this magnificent endeavour.

I’ll finish with perhaps the most famous lines in the text:

What Song the Syrens sang, or what name Achilles assumed when he hid himself among women, though puzzling Questions are not beyond all conjecture. What time the persons of these Ossuaries entred the famous Nations of the dead, and slept with Princes and Counsellours, might admit a wide solution.

NYRB Classics has yet again done us a service in publishing this pair of texts in such a handsome edition, and I congratulate them and their editors for retaining the original spellings and orthographical practices: this is not just antiquarian quaintness – it enables the modern reader to appreciate the richness of the prose. The ample notes are learned and helpful.