The subtitle of Edmund Gosse’s Father and Son is ‘A Study of Two Temperaments’. But it’s not really a study of anything, let alone the temperaments of these two characters. It’s a sort of spiritual autobiography, as it tells of the author’s experience to the age of seventeen of being brought up by parents who were members of the strict, extremely austere religious sect the Plymouth Brethren. Both his father and his mother were biblical literalists and evangelical puritans, who considered fictional books sinful. 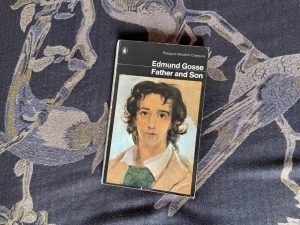 The cover shows a detail from ‘Self Portrait as a Young Man’ by G.F. Watts

Edmund was subjected from his earliest childhood to the interminable sermons and services in which his father led the small group of brethren. Reading the bible and the more serious hymns were the main diversions of Edmund’s childhood – though he did manage to smuggle in a little Strumpelpeter. The book describes his struggle to liberate himself from this stultifying education, and the development of his imaginative sensibility against these fearsome odds.

F & S is also partly a biography of his father, Philip, but not really that, either. Edmund had published a more conventional biographical account of the father in 1890, in which it seems a less monstrous portrait was given than the one in this book.

It shares more of the characteristics of a novel; scholars have pointed out numerous details that are simply invented – like the back story of his much-loved mother. His claim in the Preface to be ‘scrupulously true’ is hedged by ‘as far as the punctilious attention of the writer has been able to keep it so’. This is an early indication of the leaden prose style that I’ll come back to later.

In this respect (ie deviations from ‘truth’) it’s a bit like James Joyce’s A Portrait of the Artist as a Young Man, serialised in 1914-15 by Ezra Pound in the modernist literary magazine The Egoist; it began life as the autobiographical novel Stephen Hero in 1904, but this was abandoned and refashioned by Joyce. Both books relate the growth of the protagonist’s artistic character – but F and S could hardly be more different in style and tone.

Edmund’s upbringing was much harsher and narrower than Stephen’s in Joyce’s novel, although they both have to summon the strength to reject the dominant religious regime of their environments.

His mother died when he was young, and he was sent to a boarding school where he never settled in. Although his father, an eminent biological scientist, was clearly a loving father in some ways, his ruthless, bigoted insistence on his religious rectitude was chilling and traumatic for the sensitive boy.

It should have been a gripping read – and at times it is. His abandonment in Ch. 12 of biblical hermeneutics for another, literary interpretative system, is dramatically portrayed. His father’s crazed attempts to explain away the growing proof of Darwinist evolutionary theory are a source of embarrassment to his son – and the scientific community to which Philip belonged; these sections are fascinating and chilling at the same time.

But the prose style is the turgid Victorian type, and it makes for a mostly plodding narrative. There are some welcome lighter moments – as when young Edmund decides to forgo trying to proselytize his schoolmates, concluding he’ll ‘let sleeping dogmas lie’. He also tries some delightfully naïve strategies to test the power of his father’s jealous god, which lead him to deduce that this god isn’t all he’s cracked out to be. This is a classic account of a Victorian crisis of faith – although it seems Gosse never entirely abandoned his Christian faith; he simply rejected his parents’ extremist version of it.

The narrative ends when Edmund’s father, with the help of the Christian writer Charles Kingsley, gets his son (aged seventeen) a lowly post as a clerk at the British Museum reading room. There he was under the supervision of William Ralston, who was, as Edmund was to become, an advocate and translator of Scandinavian literature – especially of Ibsen.

Ralston, who was also a champion of Russian literature, introduced Turgenev to the London aesthetic scene. Gosse met the Russian novelist in 1871 at Ford Madox Brown’s salon, which was frequented by the likes of Pre-Raphaelite artists, and writers including Swinburne and William Morris. I wonder if Gosse would have read Turgenev’s novel about a young man’s rebellion against a father whose values he can’t share; even the title – Fathers and Sons (in most English translations) – is similar. Constance Garnett’s version, titled Fathers and Children, was published in England in 1895, and it’s difficult to imagine Gosse wouldn’t have read it. The basic stories are very different, but the father-son dynamic is equally problematic.

Constance Garnett was married in 1889 to the son of Richard, the keeper of printed materials at the British Museum where Gosse initially worked – another link in this literary chain.

Henry James was a friend of Edmund Gosse’s during his time in London in the 1880s. At first just casual, the relationship became more intimate over time – James thought Gosse amiable, ‘an endlessly amusing companion’, but ‘second-rate’, as Leon Edel has it in his Life of HJ. Edel sees Gosse as a flatterer, and describes it as ‘one of the most literary-gossipy friendships in Victorian annals.’ James is said to have quipped that Gosse had ‘a genius for inaccuracy’ – presumably referring to his literary biographies and criticism, but the point could also apply to F & S.

It’s a pity Gosse chose not to add a second volume to his account of his youth; it would have been interesting to hear his redacted, rosy-tinted story about how he became a middle-ranking man of letters who loved to hobnob with writers with genuine literary talent.

See the excellent, informative post on F & S by Bookish Beck at her blog HERE