‘One never quite knows the mountain, nor oneself in relation to it.’

Nan Shepherd wrote this homage to the Cairngorm mountains mostly towards the end of the second world war, but was advised by a well-meaning correspondent that it would never find a publisher. She put the MS in a drawer where it remained until it was published ‘quietly’ (as Robert Macfarlane puts it in his introduction to this edition) in 1977.

I find it as difficult to describe as he does:

A celebratory prose-poem? A geo-poetic quest? A place-paean? A philosophical enquiry into the nature of knowledge? A metaphysical mash-up of Presbyterianism and the Tao?

Mountains have long inspired powerful emotions in those who contemplate them. Edmund Burke, in his examination (1757) of all things ‘sublime’, such as mountain ranges, believed that ‘terror’ was its ‘ruling principle’. Until the time of the early Romantics, wild nature in all its forms, especially mountains, were viewed with similar misgivings, although there was always a concession that mighty vistas inspired feelings of awe. Rude nature was seen as something of an imperfection, a visual proof of the fall of humankind from grace. It was chaos – the antithesis of human reason and logic.

I came across a fine example of this wary attitude to nature’s wildness when listening to a podcast recently of the Radio 4 programme The Verb (dated 29.6.18), an episode called ‘Northern Rocks’ – about the craggy hills of the north of England. One contributor cited the English author and rent collector in Scotland, Edward Burt (died 1755; he was also a surveyor for the making of General Wade’s military roads there after the 1715 Jacobite rebellion). Burt wrote in 1727-28 about Scottish mountains in a grumpy letter to a friend (published 1754):

I shall soon conclude this description of the outward appearance of the mountains, which I am already tired of, as a disagreeable subject. . . . There is not much variety, but gloomy spaces, different rocks, heath, and high and low, . . . the whole of a dismal gloomy brown drawing upon a dirty purple; and most of all disagreeable when the heath is in bloom. But of all the views, I think the most horrid is, to look at the hills from east to west, or vice versa; for then the eye penetrates far among them, and sees more particularly their stupendous bulk, frightful irregularity, and horrid gloom, made yet more sombrous by the shades and faint reflections they communicate one to another.—Letters from a Gentleman in the North of Scotland to his Friend in London. Fifth edit., vol. i. p. 285. (Link to this quotation online HERE). 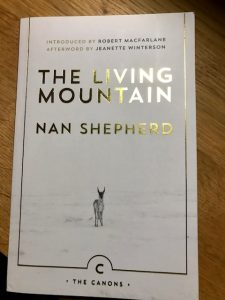 Wordsworth was to use the term ‘sublime’ about his beloved Lakeland mountain region in a more transcendendent sense, and he was influential in changing the largely negative attitudes to wild nature prevalent until his time (though there was a fashion in the decades before him for admiring the ‘picturesque’ – sanitised tableaux of natural scenes to be admired in urban drawing-rooms). Shepherd favours this Wordsworthian attitude, with a dose of sensuality, metaphysics and Zen thrown in. She’s also a sort of rural psychogeographer or flâneuse, if it’s possible to be one outside of an urban setting:

She has no truck with the (mostly male) climbers who seek simply to chalk up another peak to their tally of conquests. Mountains are not there to be vanquished. Her approach is more selfless, spiritual and poetic.

The dustjacket of this book carries a quotation from the Guardian newspaper: ‘The finest book ever written on nature and landscape in Britain’. I wasn’t convinced of this until the final three chapters. The poetic prose and lofty transcendentalism was a bit heady for my taste – though there were some lovely descriptions of the flora and fauna as well as the topography of the mountains. Then I must have become attuned to the style and approach.

There are some memorable moments, like the description of her waking from a sleep outside her tent (in the summer, of course) to find an owl perched on her tent-pole. She writes beautifully about the ‘swiftness’ of many of the creatures that live on the mountain: the eagle, peregrine falcon, red deer and mountain hare. But this isn’t sentiment or gush: as a sensible naturalist she recognises that being speedy is ‘severely practical’ –

…food is so scarce up there that only those who can move swiftly over vast stretches of ground may hope to survive. The speed, the whorls and torrents of movement, are in plain fact the mountain’s own necessity. But their grace is not necessity. … Beauty is not adventitious but essential.

This represents the best and worst of Shepherd’s prose style. That second sentence is, well, sublime, but I omitted a long sentence in that extract, which would to my mind have benefitted from some editing.

I don’t want to end on a negative note. Here’s the final paragraph, that conveys this book’s essence:

I believe that I now understand in some small measure why the Buddhist goes on pilgrimage to a mountain. The journey is itself part of the technique by which god is sought. It is a journey into Being; for as I penetrate more deeply into a mountain’s life, I penetrate also into my own. For an hour I am beyond desire. It is not ecstasy, that leap out of the self that makes man like a god. I am not out of myself, but in myself. I am. To know Being, this is the final grace accorded from the mountain.