PART TWO: for part 1 of this critique, click HERE

Fitzgerald invites him to accompany him on a trip to Lyon to collect the open-top car that he and Zelda had been forced to abandon there because of the bad weather; Zelda had bizarrely insisted the car remain a makeshift convertible after the original roof had been damaged and removed.  Fitzgerald misses the train, probably because he was drunk, and Hemingway is furious with him.  When he eventually shows up at Hemingway’s hotel in Lyon, they spend a strange evening in which Hemingway unwisely (maliciously?) plies him with alcohol.  Soon Fitzgerald insists he’s dying; Hemingway is unsympathetic; he’s probably right in thinking he’s just drunk – but he had already developed the opinion that Fitzgerald was both a heavy drinker and unable to hold his drink.

There’s a great deal of warm humour in his account of this scene: when Fitzgerald insists they send out for a thermometer to check his temperature, room service returns with an enormous device not intended for clinical use, and Fitzgerald wonders with some trepidation into which orifice his friend intends inserting it.  This good humour pervades much of the book, making it an enjoyable read for the most part, despite the swaggering self-aggrandisement Hemingway indulges in, and the generally rancorous portrayal of Fitzgerald, whose talent he clearly envies. 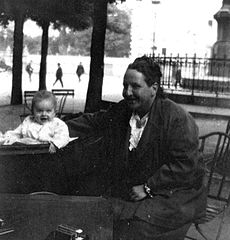 There’s warmth too in most of the other portraits of the writers he encountered in Paris.  He’d gone there in the first place partly because it was a cheap place to live, but mostly because he shrewdly gauged that he was more likely to advance his literary career in the city that was at the heart of world artistic creativity at the time.  He is generously mentored by the guru of modernism in Paris, Gertrude Stein, who is the subject of several early chapters.  Mostly his account of her and her salon is grateful and fond in tone (she was always ‘friendly’ and ‘affectionate’ towards him, at first anyway): he recounts how he learned a lot from her about technique, such as using rhythm and repetition – both of which became characteristic features of his own prose.   He gleefully tells of her opinionated, often acerbic gossip about famous writers and artists like Sherwood Anderson, Picasso and Apollinaire.   But it’s apparent towards the end of their friendship that they fell out seriously.  And he can’t resist mentioning several times that Gertrude excluded Hadley from all their conversations (he doesn’t mention making any attempt to do something about that at the time). 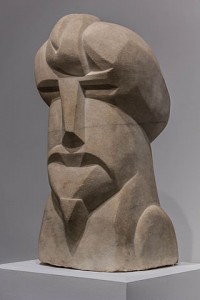 Ezra Pound’s head, by Romanian artist Gaudier-Brzeska, a piece that Hemingway admired when he saw it in Pound’s apartment in Paris (WikiCommons)

Ezra Pound was the other most notable modernist writer in Paris at the time, and he also took great interest in the ambitious young Hemingway’s precocious talent, and helped him considerably.  Nevertheless Hemingway frequently portrays himself as a superior masculine figure, for example teaching Pound to box, and finding him a poor pupil.

He’s a bit of an expat snob, too.  He haunts the Closerie des Lilas, the nearest ‘good café’ when he and Hadley lived above a sawmill (in central Paris!) at the rue Notre-Dame des Champs; he does much of his writing in this café, whereas earlier he’d rented a room to work in.  He doesn’t try to conceal his scorn for posers:

People from the Dome and the Rotonde never came to the Lilas.  There was no one there they knew, and no one would have stared at them if they came.  In those days many people went to the cafés at the corner of the Boulevard Montparnasse and the Boulevard Raspail to be seen publicly.

The Lilas was a former haunt of poets, but the only one he ever sees there is Blaise Cendrars, who Hemingway doesn’t mention had abandoned writing modernist poetry in 1925 and became a famous avant-garde novelist. 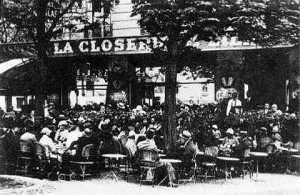 depiction of his bad-tempered reception of interlopers who pester him when he’s trying to work there, he recreates a scene in which a second-rate writer has the gall to criticise his prose style as ‘too stark’.

‘Hem, too stripped, too lean, too sinewy’.

I felt the rabbit’s foot in my pocket guiltily.  ‘I’ll try to fatten it up a little.’ 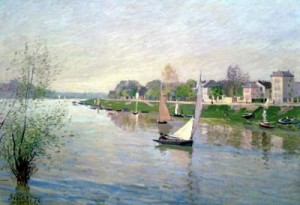 Sisley, The Seine at Argenteuil. Hemingway enjoyed taking meals at the Pêche Miraculeuse, an open-air restaurant overlooking a Seine vista that reminded him of this artist’s riverscapes (WikiCommons)

He’s joined there on one occasion by Ford Madox Ford, about whom he’s quite rude(but about the Vorticist painter and writer Wyndham Lewis he’s venomous, finding him ‘evil’): he says that Ford gloats after claiming he’s just ‘cut’ Hilaire Belloc, and recalls that Pound had advised him never to be rude to Ford for ‘he only lied when he was tired’, and that he was a good writer with ‘domestic troubles’.  Hemingway tries hard to remember this, he says, but the ‘heavy, wheezing ignoble presence of Ford himself…made it difficult.’  Maybe he just doesn’t get Ford’s English mentality; in a hilarious Wildean exchange that follows, when Ford explains that it’s necessary as a gentleman to cut a ‘cad’, Hemingway asks if one should also cut ‘a bounder’.  ‘It would be impossible for a gentleman to know a bounder’, Ford retorts.  ‘Is Ezra a gentleman?’ Hemingway asks.  ‘Of course not,’ Ford said.  ‘He’s an American.’ What about Henry James?  ‘Very nearly’, replies Ford.  And Hemingway himself?  ‘”You might be considered a gentleman in Italy,” Ford said magnanimously.’

Despite the macho posturing, then, this is an amiable book, charming at times, often very funny, though one learns very little that is trustworthy about Hemingway himself or his relationship with Hadley – though he writes of her with passion and affection.  This makes his subsequent abandonment of her at the end all the more difficult to understand, and the unflattering, ungallant way in which he tells of the affair with Pauline and ensuing separation and divorce is hard to stomach; he talks nastily of the ways he was innocently beguiled by rich people, one of whom must be Pauline, who he says used ‘the oldest trick there is’:

It is that an unmarried young woman becomes the temporary best friend of another young woman who is married, goes to live with the husband and wife and then unknowingly, innocently and unrelentingly sets out to marry the husband.  When the husband is a writer and doing difficult work so that he is occupied much of the time and is not a good companion or partner to his wife for a big part of the day, the arrangement has advantages until you know how it works out.  The husband has two attractive girls around when he has finished work.

Having begun the affair with Pauline he returns to Austria from Paris, where he’d been with her on his own, having left Hadley and Bumby in Schruns, and describes seeing Hadley waiting for him on the station platform; this passage seems both lyrically fine but also mealy-mouthed : ‘She was smiling, the sun on her lovely face tanned by the snow and sun, beautifully built, her hair red gold in the sun, grown out all winter awkwardly and beautifully…’

Notre Dame from the east (WikiCommons)

And so he leaves Paris, to which he says there is ‘never any ending’, and ‘the memory of each person who has lived in it differs from that of any other.’

Paris was always worth it and you received return for whatever you brought to it.  But this is how Paris was in the early days when we were very poor and very happy.

For my review of Paula McLain’s novel based on the marriage of Hemingway and Hadley, and its demise – The Paris Wife – click HERE